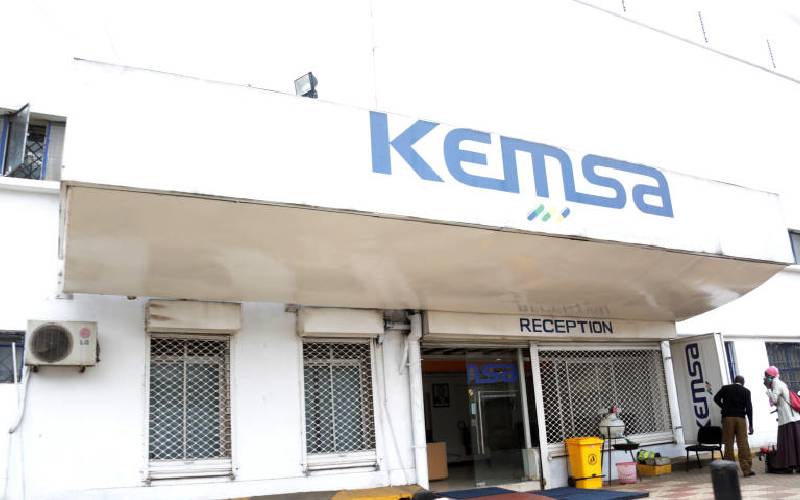 The Kenya Defence Force (KDF) has taken over operations at Kenya Medical Supplies Authority (Kemsa), a week after non-core staffers were asked to work from home.

At least 40 military officers reported at Kemsa headquarters yesterday and joined a team that had reported earlier from the National Youth Service (NYS).

“Deployed military officers will take over the roles of co-directors. Though NYS officers are also present, their roles are not clear," hinted the source.

About 900 employees were locked out of the Enterprise Resource Planning (ERP) system on Friday last week, despite Kemsa board chair Mary Mwadime assuring them that they were only to work remotely for 30 days.

Lawmakers and health officials are against the massive sacking arguing the move will mostly shield the actual culprits implicated in scandals at Kemsa. Sources at the agency told the Standard that part of the board plans to visit regional offices to woo governors to support ongoing reforms. The members will earn allowances during the visits which a source pegged at between Sh18, 000 and Sh20, 000 sitting allowance and night out of about Sh20, 000.

Yesterday, Kemsa acting CEO Edward Njoroge- held a boardroom meeting, but the agenda of the meeting was not disclosed. However, Health CS Mutahi Kagwe and the Kemsa board are expected to appear before the Senate Committee of Labour to shed light on the matter.

Narok Senator Ledama Ole Kina who opposed the move said those who were involved in Sh7.8 billion Covid-19 scandal should take full responsibility and if there is a need to restructure Kemsa, the functions should be devolved to 47 counties.

“Kenya is not a military state. We should take a leaf from what is happening in Ethiopia. If the military takes over the operation, everything operates in a military way,” said Ole Kina adding that using the military to run Kemsa will cost taxpayer in allowances and it is an ill-advised approach in solving issues of corruption.”

Though Kemsa CEO, Jonah Manjari was suspended, Ole Kina added that all recommendations made by the Senate, National Assembly, Health Committee and Public Investments Committee, should be implemented and that “the Director of Public Prosecutions (DPP) and DCI should investigate and prosecute people who were involved in the graft, and take action,”  he said adding that “the judiciary should issue orders to reinstate the employees, without blinking an eye, if this order is served at the courts.”

Nakuru Governor Lee Kinyanjui also echoed Ole Kina's sentiments, saying the involvement of the military in civilian operations, may have long-term challenges and “the  State should assemble a team of credible professionals to align institutions to their mandate and weed off rent-seeking.”

Kinyanjui reckons that the cost of healthcare in Kenya is high due to bottlenecks in procurement and since health is a devolved function, the Council of Governors (CoG) should be looped in to seek a lasting solution considering there is “too much conflict of interest in the system. The persons charged with oversight are also big suppliers and hence the institution becomes vendor-driven.”

Also, Ole Kina demanded to make public, the report that Kemsa is said to have acted on, by sending the odd staff to work from home.

“The report confirmed that Kemsa is currently under-performing and largely unable to meet client’s urgent needs, particularly the delivery of essential Medicines and Products to counties,” stated Mwadime, adding that sending staff to work from home was to enable the authority, review and take action on the report.

The report has not been made public and efforts by the Standard to get a copy has been futile and Ole Kina is of the opinion that “there is no report, and if there is, would Kemsa share it with the public, as per the law.”

Kemsa is expected to recruit a new CEO as the term for Dr Manjari, who joined the entity in 2018, ends in June next year. As per Kemsa Act, recruitment allows for six months, before the expiry of the contract.

Police in Naivasha are pursuing a motorcycle operator suspected of killing a pillion passenger.