ODM leader Raila Odinga’s ambitious pledge of transferring Sh6,000 to the poor if he forms the next government will cost taxpayers at least Sh137 billion.

Raila yesterday insisted that the programme was viable, even as he fought off critics who have labelled it a ‘populist promise for political expediency’.

The ODM leader said that the money would be channeled to two million of the poorest households, which represents eight million Kenyans assuming that each household is made up of four members.

Raila said he made the promise after careful analysis of the country’s demographics and possible sources of the funds, and vowed to aggressively fight corruption to free resources for development.

He pledged to focus on creating a government that “cares, accounts and caters for every single citizen, rich or poor, young or old, man or woman.”

“As I declared a few days ago, I am looking forward to a government that shall embark on a direct cash transfer programme to the two million poorest households in the country going forward,” said Raila during a press conference in Nairobi.

The opposition leader said his administration would pump billions of shillings in addition to what is currently being spent by the government to assist elderly persons.

“This initiative will integrate the current social protection programme on which we already spend Sh37 billion. We would add about Sh100 billion to this and expand it to include the poorest of the poor among Kenyans.”

He dismissed claims that implementation of the programme would see Kenyans pay more taxes, saying that the additional funds would be redirected from various ministries that will take a 25 per cent budget cut to ensure its smooth implementation.

“The budget cuts would be followed by an even wider rationalisation aimed at transferring government services to the poor and towards assisting the private sector – SMEs in particular – to grow and prosper.”

Raila said the cash transfer programme will run in tandem with long-term initiatives aimed at creating jobs, reducing the cost of living, and securing business opportunities and a conducive environment for small enterprises.

“All these will be accompanied by an aggressive anti-corruption campaign that would not only save money but also yield additional resources to be directed at protecting the poor.”

The ODM leader said that sealing corruption loopholes would free up enough resources to finance the programme. “We have been told Kenya is losing a third of its budget–the equivalent of about $6 billion or Sh600 billion–to corruption every year. I don’t need to emphasize what these monies can do,” he said.

Raila said that a “lax attitude” towards public funds had created a “fertile environment for corruption and outright theft by State officers.” Rampant graft in the public sector, he added, had created a “perverse incentive structure where people join public service to get rich.”

He invited Kenyans to join him in building a united country under his clarion call of ‘Azimio la Umoja’, while promising to ensure everybody is fed, healthy, educated and safe.

Earlier in the day, Raila toured Kamukunji in Nairobi where he rallied eligible voters to turn out and enlist in large numbers ahead of the next polls.

Raila was accompanied by politicians from the ruling Jubilee Party and ODM.

Mr Kamanda said that Jubilee and ODM had resolved to field Raila as their joint presidential candidate in the succession race.

Ms Shebesh said that enlisting and voting for Raila “will ensure a Handshake government takes over after Uhuru steps down.”

“We are back home because of the Handshake between Uhuru and Raila. Will you register so that we have handshake government?” she said.

Kenya sent its most elite military unit behind enemy lines to hunt down a man who was listed top on its list of most-wanted terrorists.

Elog has called on Parliament to pass the pending laws to ensure that the IEBC is aptly prepared for the 2022 General Election. 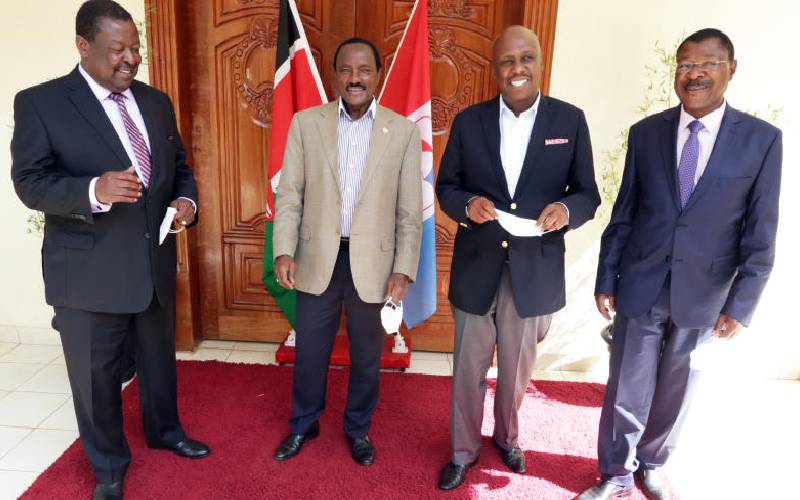