Alarm over barriers to wildlife migration

A report on wildlife migratory corridors in Kenya has laid bare the havoc infrastructural development has caused along the routes. Conservationists have also raised the alarm over the situation they say has extended from Athi-River, all the way to Tarangire in Tanzania, leaving a trail of destruction of the ecosystem.

This is also affecting the annual spectacle of wildlife migration in the Mara-Serengeti ecosystem that brings together millions of wildebeests crossing the crocodile-invested Mara River alongside hundreds of zebras, gazelles and hartebeests.

Wildlife Direct CEO Paula Kahumbu said wildlife numbers in Kenya are declining at higher rates as a result of infrastructure, including fences, railway lines, powerlines and windmills coming up along migratory routes.

“When we do developments that threaten nature and environment, it is not sustainable and wildlife population continues to dwindle. Most of Kenya’s wildlife, including the wildebeests, zebras, hundreds of species of birds, gazelles alongside many others are migratory in nature,” Kahumbu said during a webinar on migratory corridors.

While more than two million wildebeests cross the Mara River within the Mara-Serengeti ecosystem in the annual migration, over 255 bird species bringing together over 2.1 billion birds fly across Africa from Europe in their migration journey.

However, the migration of the wildebeests over the years has been declining with the collapse of major migratory routes, including the Athi-Kaputiei and Mara-Loita. Mara-Serengeti corridor also faces challenges.

“It is almost hard to tell that there existed other wildebeest migratory routes besides the Serengeti-Mara. Currently, wildebeest migrating within the Mara-Loita has reduced by 95 per cent while those in Athi-Kaputiei-Amboseli corridor have declined by 98 per cent,” said Kahumbu. 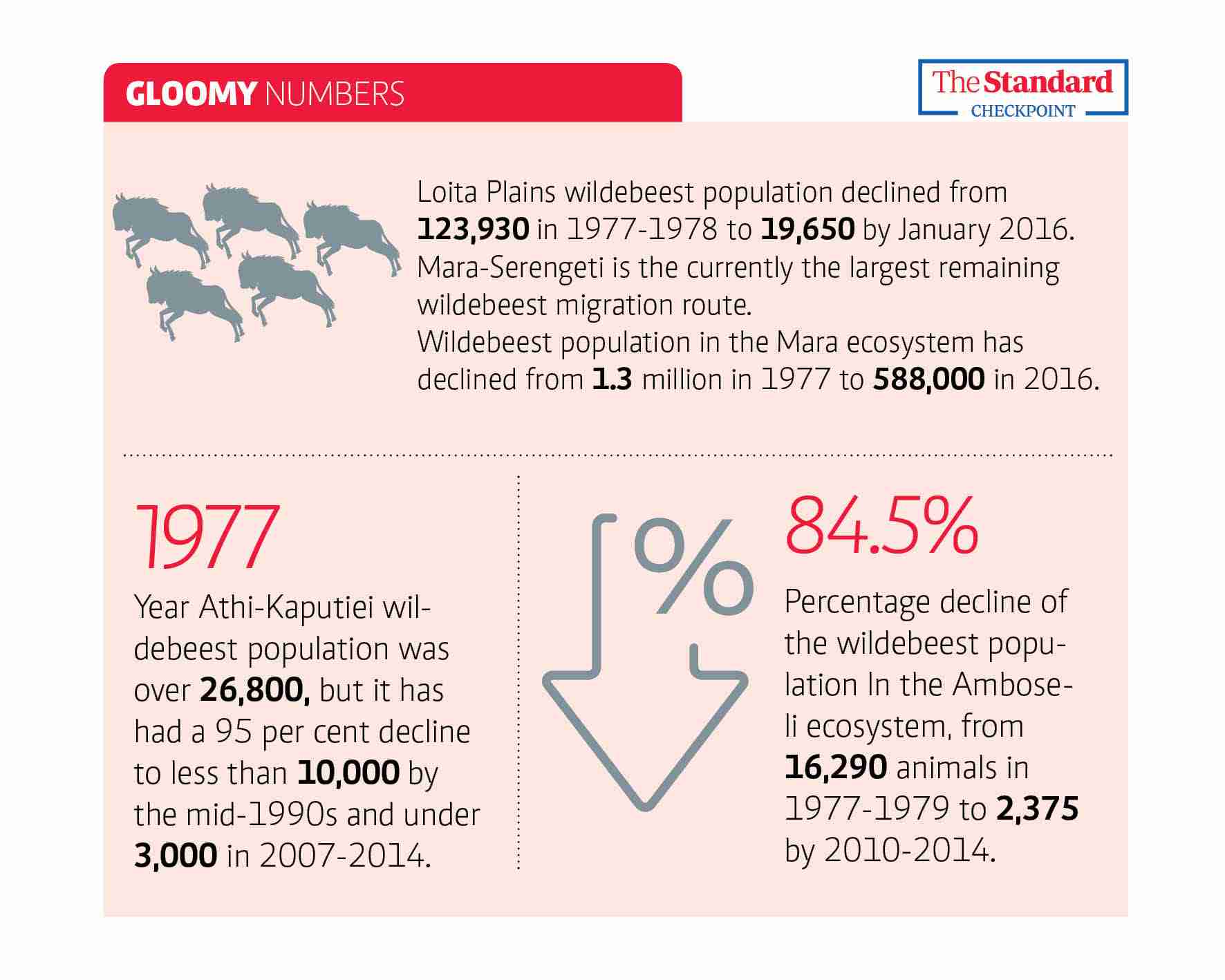 While Mara-Serengeti still hosts one of the world’s eighth wonder, the reduction of the water volume over the years sounds a warning of impending danger.

“Mara River is critical in supporting the lifeline of these wildebeests but then it has a fair share of the challenges. The water volumes in River Mara has reduced by over 60 per cent, a situation that calls for action,” she said.

Although the population of wildebeests in the country has been on a decline as a result of collapsed migratory routes, Joseph Ogutu, a senior statistician at the University of Hohenheim, warned on the risk of local extinctions as a result.

In a 2019 research, Ogutu and his team of researchers found out that most migration routes in Kenya and Tanzania were on the verge of collapsing.

In the study, researchers used aerial survey and collected data over almost 60 years between 1957 and 2016 in Kenya and Tanzania. The study revealed that the Athi-Kaputiei, Amboseli and Mara-Loita migration routes remain the most severely threatened.

Their findings warned that the collapse of the wildebeest migratory routes increased the risk of local extinctions of wildebeest in four historically wildlife-rich East African ecosystems because the animals are blocked from accessing critical resources. “We found extreme declines in the numbers of migrating wildebeests and loss of most migration routes in Kenya and Tanzania. Four of the five contemporary migrations, including the Mara-Loita migration, are severely threatened and have virtually collapsed,” Ogutu said. According to the report, the Loita plains wildebeest population declined from about 123,930 in 1977-1978 to around 19,650 animals by January 2016, a decline of 80.9 per cent.

Mara-Serengeti is currently the largest remaining wildebeest migration route. The route straddles Kenya and Tanzania. Wildebeest population in the ecosystem has since declined from 1.3 million in 1977 to 588,000 in 2016, according to a recent study.

“The dramatic decline was also evident for the Narok County wildebeest population,” reads the study published at biorxiv.org.

“Migratory wildebeest population size and their routes declined in all the five ecosystems except the Serengeti-Mara. The declines are related to the expansion of agriculture, settlements, fences and roads that progressively occlude wildebeest grazing resources and migratory routes,” says the report.

“Settlements also interfere with wildebeest movements in the Mara, Tarangire-Manyara and Athi-Kaputiei by blocking their migratory routes and access to resources.”

The study calls for the protection of key rivers like Mara River and the cultivation and settlements on migration routes to be stopped. Deforestation, the study notes, must also be managed.

“There must also be greater coordination and collaboration between Kenya and Tanzania to conserve the transboundary migrations,” it notes.

The mapping was done in 2017 with an aim of securing wildlife migratory routes and corridors across the country. The most affected species whose migratory routes have been interfered with include the elephants, wildebeest, burchell’s, zebra, Grevy’s zebra, giraffe, buffalo, topi and oryx.

The migratory corridors and dispersal areas are mainly found in human- and livestock-dominated landscapes. In the southern Kenya rangelands, 17 corridors were mapped in the Masai-Mara ecosystem, Eburu Forest and lakes Naivasha-Elmentaita-Nakuru conservation and ecological areas among Athi-Kaputiei and Nairobi National Park.

In the mapping, it was observed that all the wildlife dispersal areas and migratory corridors in Kenya’s rangelands have been interfered with by human activities to an extent that some are completely blocked while others are highly threatened.

While migratory routes within the vast landscapes remain under threat, Nature Kenya Director Paul Matiku says birds’ migratory routes are not spared either by infrastructure. He said billions of birds migrate across continents every year. However, infrastructure such as power lines and windmills constructed within major flight paths remain the biggest challenge.

“These incidences are not new. Cases of bird collision and electrocution have been recorded across the country. The latest incident is where over 50 flamingos collided with powerlines in Soysambu conservancy. Days later, giraffes were also executed within the same area,” Dr Matiku said.

“Areas deemed critical for biodiversity conservation should be avoided when putting up new power lines. These include migratory flyways and breeding sites such as Lake Elementeita where birds transit, feed, rest and even nest. Where avoidance is not possible, avian safety measures should be adopted,” said Matiku.

Birdlife International Africa Flyways Programme Manager Alex Ngari said population of some migratory bird species has been declining. Declines have been attributed to major infrastructural developments coming up along the flyways, which birds use during their seasonal journeys.

According to Ngari, massive energy infrastructure in Ethiopia, Kenya, South Sudan, South Africa, Zambia and the Democratic Republic of Congo are among the challenges within the bird migratory corridors in Africa. “Governments should realise that migratory birds belong to us all and they should consider them when coming up with infrastructure projects,” he said.

The International Criminal Court has denied lawyer Paul Gicheru's a chance to challenge confirmation of charges against him.

How nosey Mo nearly exposed the Pope in his bedroom

By Wainaina Ndung’u | 7 hours ago

Two more women who claim to be wives of man killed in Mirema record statements
;
Feedback