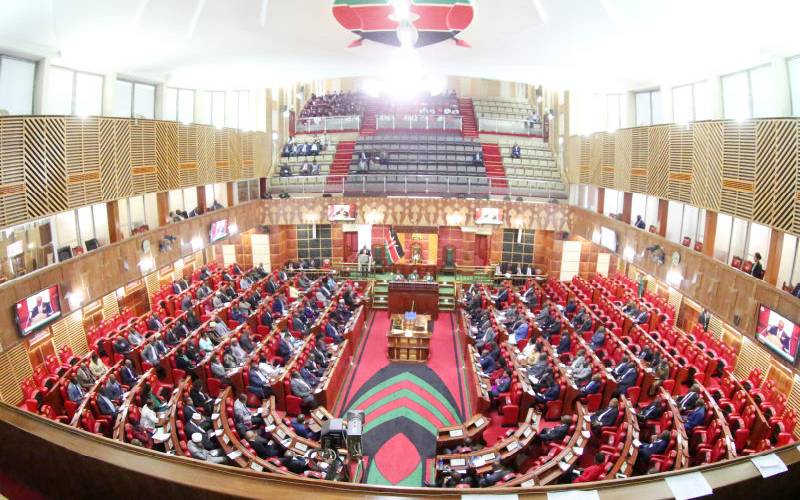 The National Assembly has passed the BBI bill.

Those who voted Yes numbered 235, against the 83 votes for No on the second reading. Two lawmakers abstained.

At the third reading, 224 MPs supported the Bill as 63 voted no and two abstained

Only yesterday, President Uhuru Kenyatta and ODM leader Raila Odinga asked Members of Parliament in the National Assembly and Senate to pass the Constitution of Kenya (Amendment) Bill, 2020.

In a joint statement on Wednesday, the two principals asked the parliamentarians to listen to the voice of the people.

While urging them to put aside their political differences, Uhuru and Raila said it is not the time for political adversity.

Mandera North’s Bashir Abdullahi said while the document is not perfect, 80 per cent of it will help Kenyans.

He said BBI caters to devolution as well as having the CDF entrenched in the constitution.

Abdullahi added that on the matter of inclusivity, the positions of President, Deputy President and two Prime Ministers will ensure several communities are represented in the house on the hill.

He continued that were it not for the unity deal christened Handshake, there would have been two republics led by the President and the People’s President.

Majority leader Amos Kimunya said those supporting BBI chose their country, backed by the more than three million Kenyans who said they back the law changes; while those against it put their personal wishes first.

Rarieda MP Otiende Amollo voted in support of the BBI bill. This was even after he was kicked out as the vice-chair of the National Assembly Justice and Legal Affairs Committee (JLAC) less than a year after he assumed office.

The Senior Counsel, who appears to have rattled a section of the Orange party members not comfortable with his stance on the BBI Bill was replaced by Ruaraka MP TJ Kajwang.

It was rather expected that MPs allied to Deputy President William Ruto and the Tanga Tanga faction would vote against the Bill.

Others, though not directly linked to DP Ruto, were largely from the Eastern and the Rift Valley region.

While voting against BBI, Uasin Gishu woman representative Gladys Shollei said it is a two-man initiative disguised as a popular initiative.

Is BBI for or against women's leadership?

MP Korir of Bomet vehemently rejected the BBI, saying there were more pertinent issues at hand, such as the ailing economy.

There is no unanimity that, with BBI, women will finally break the chains of under-representation in sharing the national cake. On the contrary, doubts have been cast that the document claws back on the gains made, and has generated more heat than light.

Korir said the courts have in the past ruled that the House is not properly constituted in terms of gender. She added that as it is, women are equal to the task and should not always be left to hold nominated positions.

On more funds to counties, she said the law says counties are entitled to at least 15 per cent of the budget. She says the percentage can always go higher.

“Those pushing for BBI are not interested in the people.”

Korir added that with a new coronavirus variant, politicians should be allocating more funds to the vaccines, not BBI.

“We are moving in the wrong direction.”

Those who supported the Bill, such as MP Ngunjiri Wambugu, said the concern on the number of constituencies should not come up. He called on his fellow leaders from Nyeri county to support BBI as it is a representation of the constituents' wishes.

“Some parts of it are not perfect, but every single thing we do cannot be perfect.”

Wambugu added that those opposing the BBI are pushing for the bottoms-up narrative, which he said has been catered for in the bill.

He said there is no more support to counties than the 35 per cent allocation promised to counties, thus, bringing money to the people.