President Uhuru Kenyatta has this morning made an impromptu visit to inspect the Green Park Bus terminus at Nairobi’s Railway Station.

He was accompanied by ODM leader Raila Odinga.

The president is commissioning and being updated on the progress of the projects run by the Nairobi Metropolitan Services (NMS).

He is also expected to officially launch the Nairobi Terminus Level 2 health facility.

The Green Park Bus Terminus, a project of the NMS is aimed at decongesting the city.

In November last year, NMS said: “The terminus is among the newly designated termini constructed by NMS as part of the Nairobi Integrated Urban Development master plan and Decongestion Strategy under which PSVs will terminate outside the CBD.”

The bus park will serve as both a drop-off and pick-up point. 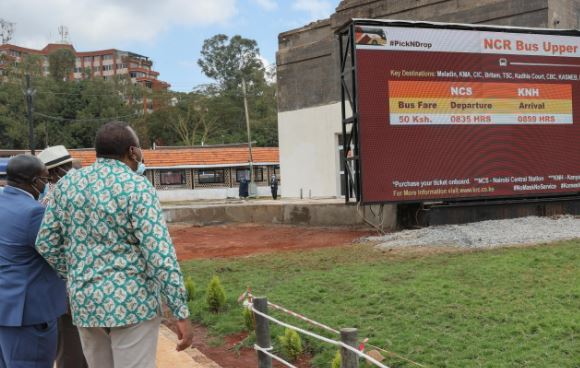 Uhuru’s surprise visits and drives in the city to inspect projects being implemented by NMS are characteristic.

He would some time last year drive himself at night to inspect the goings-on, with his security in tow, catching members of the public off guard.

Kanyi died on Wednesday at an Eldoret Hospital after developing breathing problems.