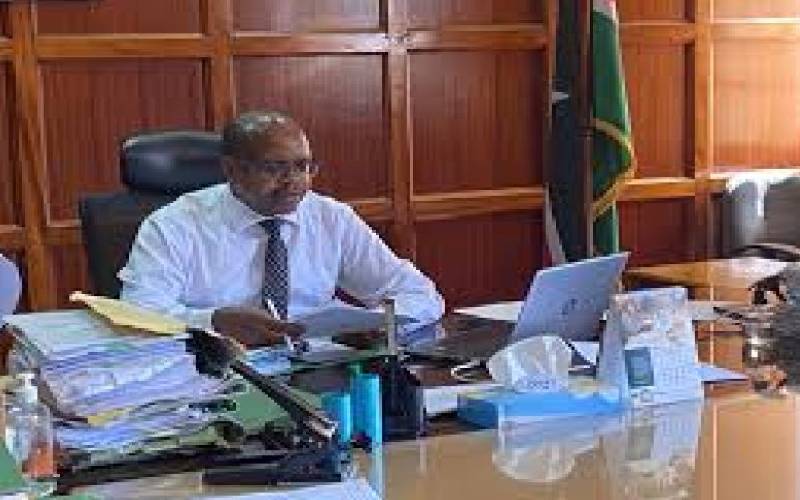 The anti-graft agency has recovered 53-acres of land worth Sh5 billion taken from the Kenya Meteorological Department (KMD)and allocated to private companies.

Justice Elijah Obaga (pictured) ruled that former Commissioner of Lands Wilson Gachanja acted outside his powers when he alienated the government land and allocated it to five companies which went ahead to develop and put up multi-billion shilling structures on it.

“Once a public land has been reserved for a particular purpose, it is considered as alienated and cannot be available for allocation to private entities. The Commissioner of Lands had no authority to allocate the land for industrial use since it is only the president with such powers,” ruled Justice Obaga.

Justice Obaga went ahead to revoke the titles which had been issued to Beacon Towers Ltd, Hillbrow Properties Ltd, Brentwood Traders Ltd, Varun Industrial Credit Ltd and Pamba Properties Ltd for the 53.4 acres on grounds that the titles were irregularly acquired.

Interestingly, the judge found that all the five companies had the same directors and that there was suspicion on how their letters of grants were processed in a record two days on January 12 and 13, 1998.

His decision means the companies will lose their multi-billion shilling investments after he allowed KMD to take over possession.

“One cannot have over 50 acres of government land and claim he was an innocent investor. There is evidence that the companies were incorporated for the purpose of taking away land reserved for KMD and if that is not fraud, then I do not know what other fraud can surpass this,” he ruled.

The land is in Industrial Area, off Mombasa Road, and stretches from behind Panari Hotel to Enterprise Road and contains several industrial buildings and warehouses the companies had constructed and let out to other entities.

According to the judge, the former Commissioner of Lands abused and exceeded his powers, and that his action of aiding land grabbers was tainted with illegalities after he failed to safeguard public properties.

Although the companies argued that they took possession of the land when it was vacant, Justice Obaga ruled that a site visit established the existence of KMD staff houses, a broadcasting studio and a standby generator.

“It is clear from the site visit that the land was not available for alienation as at the time the companies acquired it. The land became public property the moment it was reserved for KMD. I find that it was a government land which could not be allocated to any other person,” ruled Obaga.

He said if the government wanted to dispose of the land, the regulations require that the houses and other structures should have been disposed of in accordance with the law and a proper advertisement made to indicate the change from public to private use.

The Ethics and Anti-Corruption Commission had filed the suit to recover the KMD land, arguing that the state agency was allocated the place in the 1960s and had occupied it until 1998 when the land was irregulalrly transferred to the companies.

According to EACC, the illegal transfer involved collusion by top Ministry of Lands officials despite the fact that the facility was used by KMD to relay vital information to sea-going vessels and weather patterns to aircraft.

The commission claimed that the private developers took advantage of the failure by the Ministry of Environment to process the title for the land, which made it prone to grabbing.

Justice Obaga ordered the Registrar of Lands to amend its records to show that the land belongs to KMD.

Analysts warn the worst is still to come for the country’s major exports despite withstanding initial shocks brought about by corona pandemic.