50 personalities who shaped Kenyan headlines in the last decade 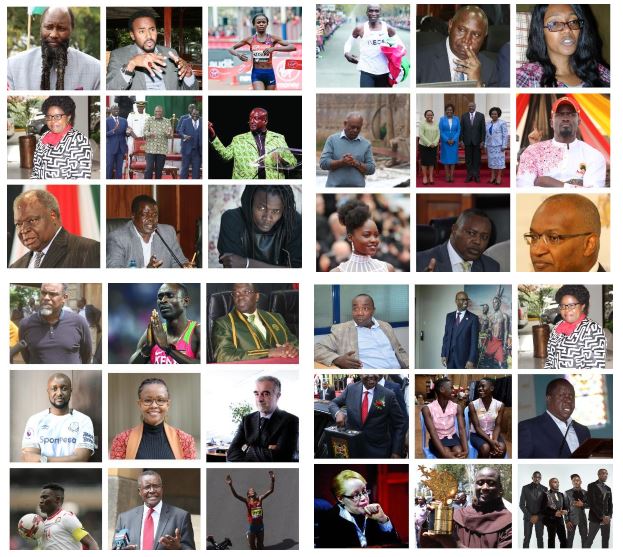 From landmark rulings to historic wins, the last 10 years were marked by several firsts for the republic.

1. Justice Grace Mumbi Ngugi: Made a ruling in July 2019 that barred Governors facing trial from accessing their office. A precedent setting ruling that some activists and lawyers want extended to other lower political offices:

2. Noordin Haji: Director of Public Prosecutions who, together with Director of Criminal Investigations (DCI) George Kinoti, have made the fight against graft their top priority.  The two have since overseen the prosecution of high-profile Government officials, though they are yet to win a conviction.

3. George Kinoti:  Together with Haji, Kinoti has dedicated much of his 12-months in office going after some fat-cats in Government who he believes have bankrupted the country.

4. Samantha Pendo:  Fondly known as Baby Pendo, the six-month-old infant, who died in the skirmishes that followed the 2017 polls has come to symbolize ugliness of police brutality. She died of internal injuries after being clobbered by police while in her mother's arms.

5. Eliud Kipchoge:  He managed to run a marathon in under two hours, a record-breaking feat.

6. The Akashas: Kenyan drug lords, the Akasha brothers, were sentenced to 25 years in prison in the United States for exporting heroin into the country.

7. Atul Shah and the fall of Nakumatt:  Atul Shah, started what would become the region’s largest supermarket. He would also oversee its fall.

8. President Uhuru Kenyatta:  The fourth President of Kenya, having succeeded Mwai Kibaki. By the time he was being voted in, he had been indicted by the International Criminal Court for crimes against humanity. First head of state under the new Constitution.

9. Deputy President William Ruto- Ruto, like Kenyatta, also had to face the Hague-based court to answer to crimes against humanity charges following the post-election violence of 2008. He was the first deputy President under new Constitution.

10. Raila Odinga: His supporters would like to call him an enigma, as the title to one of his biographies described him. But having lost in four elections, his critics think he is a spent force. Nonetheless, Odinga continued to define Kenya’s politics into the last decade.

11. CBK Governor Patrick Njoroge:  Under Patrick Njoroge, the Central Bank of Kenya has tightened regulations some of which have seen the collapse of two banks, with another being acquired after it went into receivership. It was also during his time that the old Sh1,000 note was withdrawn from circulation.

12. Bob Collymore: The late Safaricom CEO, might have found a telecommunications company that was already on its feet, but he gave it wings. He presided over the expansion of M-Pesa, to become a platform for borrowing as well as buying and selling goods and services.

14. Wanyama/Mariga/Olungah: This is decade when a number of Kenyan soccer players played top flight football in major European leagues, including English Premier League, Laliga and Serie A.

15. Jude Njomo-  Jude Njomo, the MP for Kiambu Central, will be remembered for coming up with the law that capped interest rate. The bill was meant to help Kenyans get cheap loans, but President Uhuru Kenyatta successfully pushed for its reversal last year, noting that it had been counterproductive.

16. Kakamega twins separated from birth: The story of Sharon Mathias and Melon Lutenyo, who were reunited this year, nearly 20 years later after being separated at birth, kept the whole nation enthralled.

17. David Rudisha: David Rudisha is the 2012 and 2016 Olympic champion, 2-time World Champion, and world record holder in the 800 metres. At his peak, he was being compared to  Jamaica’s Usain Bolt, the world’s fastest runner.

18. David Maraga - The first Chief Justice in the continent to annul a presidential election in 2017.

19. Willy Mutunga-  Mutunga was the first Chief Justice and president of the Supreme Court, under the new constitution. He helped to institute Judicial reforms.

21. Edward Ouko: The fiery accountant was a thorn in the flesh of President Uhuru Kenyatta’s administration. The first auditor general, under the new constitution, he questioned the Government’s spending including proceeds from the country’s first Eurobond.

22. Agnes Odhiambo: She was the first Controller of Budget under the new constitution. Her work was to ensure that all the legal and technical requirements had been met before any public body could spend money.

23. Fred Matiangi- The now Interior Cabinet Secretary left an indelible mark in the education sector when he headed the docket between 2015-2017, with his far-reaching reforms. His crackdown on exam cheating saw the number of As scored by KCSE students dramatically reduce.

24. Moreno Ocampo- The former ICC Prosecutor is the one that was responsible for the prosecution of four Kenyans at the Hague-based ICC. The cases have since collapsed with his successor Fatou Bensouda blaming Ocampo for bungling the cases.

25. Abdul Haji- The brother to the current Director of Public Prosecutions Nordin Haji, Abdul has come to be known as the face of Westgate attack heroes. During the  attack on the mall in Westlands Nairobi in September 2013, Abdul risked his life to save countless others , as did a number of other security officers and civilians and emergency response teams that pitched in to help victims of the attack.

26. Anne Mumbi- Currently the Governor of Kirinyaga, she  will be remembered for how she changed National Youth Service (NYS), as Devolution cabinet secretary. She would eventually leave the ministry to take up what she described as lighter duties in the wake of public outcry over loss of billions at the department through procurement malpractices.

27. Francis Wangusi- The outgoing Communications director is responsible for the shift from analogue to digital, a development that has completely altered the media landscape.

28. Audrey Mbugua- The transgender activist that went on to have gender changed from a male to a female.

30. Peter Mokaya Tabichi- Mr Tabichi is a Kenyan science teacher and Franciscan friar at the Keriko Mixed Day Secondary School in Pwani Village. He is the winner of the 2019 Global Teacher Prize. He was rewarded for giving all his salary to charity.

31. Lupita Nyong’o- The Hollywood actress was the first Kenyan to win an Oscar award.

32. Salah Farah- Muslim teacher shot while shielding other passengers by refusing to be seperated along religous lines.  Al Shabaab terrorists had attacked the Mandera bound bus in December 2015 that Farah was on. He died weeks later from his injuries.

33. Brigid Jepscheshir Kosgei-  The winner of the 2018 and 2019 Chicago Marathons and the 2019 London Marathon is the current marathon world record holder for women running in a mixed-sex race, with a time of 2:14:04.

34. Rita Jeptoo- History might judge her harshly for being the first one to soil Kenya’s rather clean athletic record with accusations of doping. Other prominent athletes felled by the doping scandal include 1500metres runner Asbel Kiprop.

35. Sauti Sol- The group has had a part to play in the sound of Kenya’s pop music beyond its boundary in the last decade might be attributed to this quartet. They will also be remembered for popularizing Afro-fusion in Kenya.

36. Juliani- While King Kaka might be doing well currently with his hitsong Wajinga Nyinyi, the prize  for popularising political songs in this decade goes to Juliani.

37. Mwai Kibaki- It is the former President who set the ground for the growth of the country’s economy. Kibaki is remembered for the manner in which he helped the economy to take-off. It was also under his tenure that the country got a new constitution in 2010.

38. Julius Karangi- The Commander in Chief of the armed force that declared war against Al Shabaab was President Mwai Kibaki, but the general that led the Kenyan troops into Somalia was Julius Karangi. The Linda Nchi operation is yet to end since 2011 when it was started.

39. SGR and Chinese invasion- The Standard Gauge Railway for which Kenya has borrowed close to Sh500 billion is symbolic of Chinese invasion into Kenya. China has been welded into the country’s development agenda, building roads, houses, or even just selling household stuff.

40. Prophet Owuor- One of the personalities that have elicited debate on matters religion in the last 10 years is prophet Owuor. A televangelist that does not fit in well into the DNA of popular prosperity gospel, Owuor has attracted followers for his ‘miracles.’ But he has also attracted critics who have questioned the miracles.

42. Henry Rotich- The suspended National Treasury Cabinet Secretary is the first CS to be arraigned in court while still in office, following President Uhuru Kenyatta’s war on  graft that has seen a number of senior Government officials charged in court.

43. Charity Ngilu/Ann Mumbi /Joyce Laboso-  They were the first women Governors to be elected under the new Constitution and came into office in 2017.

44. Dr Peter Gichuhi Mwethera: Gichuhi invented a gel that can kill HIV, the virus that causes AIDS. He is the director of Medical Africa Limited.

45. Ronald Karauri- The former pilot is the CEO of Sportpesa, a betting company that contributed to the growth of the betting craze in Kenya. The company has since shut its operations in the Kenyan market, leaving a big hole in some sectors of the economy including media and sports.

46. Fred Ngatia- The lawyer convinced the Supreme Court to abolish mandatory death sentence, a far-reaching decision that has seen most of the capital punishments in the country commuted to life imprisonment.

47. Okiya Omtatah- An activist who has taken upon himself the burden of representing ordinary Kenyans. He has won a number of cases, despite representing himself in most of them.

48. James Mwangi- After helping the growth of micro-lending, the CEO of Equity Bank, pioneered agency banking, which reduced the number trips to banking halls. Never afraid to try new grounds, Mwangi has now cast his eyes on digital banking.

49. Juliana Rotich- She is an information technology professional who has developed web tools for crowdsourcing crisis information and coverage of topics related to the environment. She is the co-founder of Ushahidi, open-source software for collecting and mapping information.

50. John Chigiti- Successfully fought for intersex children to have registration documents and recognized as a gender

Give foreign spouses the right to work in Kenya

Kenyans abroad are beneficiaries of such arrangements

By Stephanie Wangari | 17 hours ago