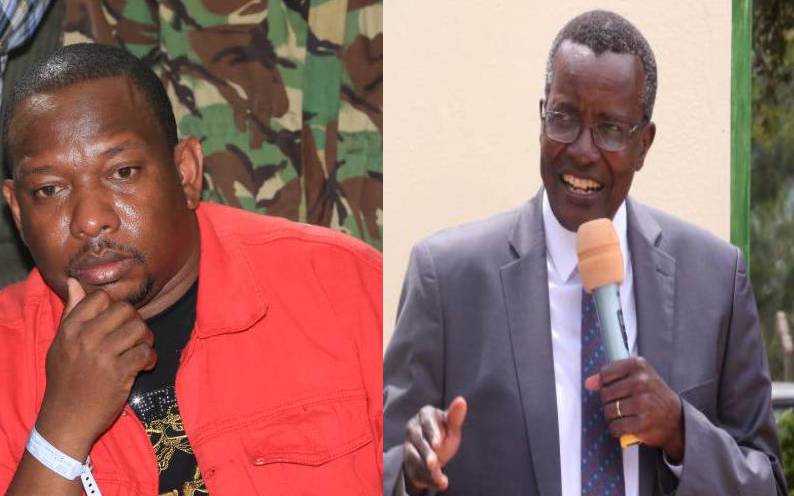 Chief Justice David Maraga (pictured right)  on Thursday skipped Jamhuri Day Celebrations in an apparent protest over alleged mistreatment in previous state functions. All other arms of government were represented in the function held at Nyayo Stadium apart from the Judiciary headed by Maraga. He gave the function a wide berth despite being listed among dignitaries that were expected to grace the function attended also by visiting Bardados Prime Minister Mia Mottley

His absence was unexpected that Deputy President William Ruto acknowledged him when he delivered his written speech. The decision followed his last month’s bitter protest of an alleged well-orchestrated plot by senior government functionaries to frustrate his office. In the press briefing rant, the Chief Justice listed an alleged mistreatment during the Mashujaa Day celebrations in Mombasa and declared he would henceforth choose which functions to attend. Maraga had claimed he had to walk through the sidewalk and the Master of Ceremonies did not acknowledge his arrival like he did for other state officers during the Mombasa fete. Also consciously missing was Nairobi Governor Mike Sonko (pictured left), who is facing charges of corruption. Sonko was on Wednesday released on a Sh15 million cash bail.

Nairobi City County was, however, represented by Nairobi Senator Johnson Sakaja and Woman Representative Esther Passaris who both sat at the front row of the dais. The state function stuck to its program with speeches restricted to Barbados PM who was the special guest, Ruto and Uhuru. Ruto delivered a brief speech before welcoming Mottley and later Uhuru. Party leaders including former Prime Minister Raila Odinga (ODM), Musalia Mudavadi (ANC) and Kalonzo Musyoka (Wiper) were among the big names in attendance who did not manage to address the public. National Assembly Speaker Justin Muturi and his Senate counterpart Ken Lusaka, First Lady Margaret Kenyatta, Uhuru's mother Mama Ngina, DP Ruto's wife Rachel, Elgeyo Marakwet Senator Kipchumba Murkomen and other dignitaries were at the ceremony. Barbados PM hailed the trade partnership between Kenya and her county saying it would guarantee development for both countries which she said shared similar values.

"The work we have done together promotes a rich future. We don't exist to praise institutions but to make life good for the people," said Ms Mottley. Ruto steered out of politics but asked Kenyans to desist from negative ethnicity and work together. He also praised Uhuru as leading the largest transformation in the history of the country through the Big Four development plans. "Your leadership gives us the biggest possibility to roll out transformation in our nation starting from the Big Four development agenda," said Dr Ruto. Despite the limited speeches, the ceremony was marked with colourful images including songs, dances, spoken word poems and military shows. Colours of the national flag were also at the display with performers using African costumes designed with a play of the colours. Among the performers included entertainment from bands drawn from security officers as well as selected groups of artists presenting patriotic-themed performances. The Mushrooms musical band with their popular Amka Kumekucha thrilled the attendants. Children from various schools also performed among them spoken word poem castigating corruption.

It is international beer day, but there won’t be any celebrating