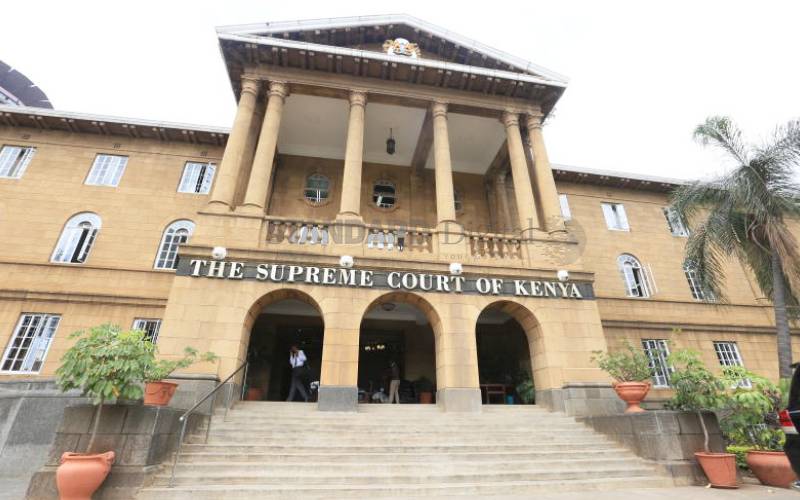 The Supreme Court has opened a limited window for parties to challenge arbitration awards in the Court of Appeal whenever there is proof of grave blunders by the High Court.

In a landmark decision that will now guide commercial disputes and seen by The Standard, four judges found that an aggrieved party can challenge orders of the High Court on appeal, but with a caveat.

Justices Mohamed Ibrahim, Smokin Wanjala, Njoki Ndung’u and Isaac Lenaola ruled that the only instance that an appeal may move to the Court of Appeal is where the High Court, in setting aside an arbitral award, has stepped outside the grounds set out in Section 35 of the Arbitration Act.

Section 35 provides that an aggrieved party has to provide proof there were gaps in the arbitration agreement. In addition, the party has to show the agreement is not valid to the law the parties have anchored it on, there was no proper notice of appointing an arbitrator, or the award was induced or affected by fraud or undue influence or corruption.

“This circumscribed and narrow jurisdiction should also be so sparingly exercised that only in the clearest of cases should the Court of Appeal assume jurisdiction,” the judges ruled.

They continued: “In stating as above, we reiterate that courts must draw a line between legitimate claims which fall within the ambit of the exceptional circumstances necessitating an appeal and claims where litigants only want a shot at an opportunity which is not deserved and which completely negates the whole essence of arbitration as an expeditious and efficient way of delivering justice.”

At the heart of the case is a Sh500 million arbitration battle between mobile services provider Airtel and a distributor, Nyutu Agrovet Ltd. The two firms had entered into an agreement in 2007 where Nyutu was contracted to distribute telephone handsets on behalf of Airtel.

The dispute arose when George Chunga, an agent of Nyutu, placed orders for products totaling to Sh11 million. Upon delivery, Airtel realised the orders were made fraudulently. Nyutu also failed to pay the Sh11 million.

Airtel terminated Nyutu’s contract, citing fraud, resulting in a bitter fallout. Nyutu and the telco later agreed to have the dispute arbitrated by Senior Counsel Fred Ojiambo. After hearings, the lawyer awarded Nyutu Sh541 million in 2011.

Aggrieved, Airtel moved to the High Court, which set aside the award. Nyutu quickly launched a suit in the Court of Appeal, but the matter was struck out after the court noted that in arbitration, High Court judgements are final.

Nyutu filed a case in the Supreme Court arguing that its right to appeal had been unjustly limited.

Lawyer Kamau Karori for the Chartered Institute of Arbitrators urged the top court to limit the right of appeal to “correcting grave and patent errors of the High Court which, if left to stand, will undermine the practice and benefits of arbitration”.

“Most parties, especially those engaged in commercial transactions, desire expeditious and absolute determination of their disputes to enable them to go on with their businesses. They require a final and enforceable outcome. The objectives of arbitration would be defeated and arbitration will be a precursor to litigation. This is because any court proceedings that render an award unenforceable affects the principle of finality,” ruled Justice Maraga.

But in the end, the majority ordered that Nyutu’s appeal, which is before the Court of Appeal, be heard and determined.