The over 600,000 workers who make up the public sector are set to enjoy a salary increase from July.

Under a new pay structure for the civil service, the Salaries and Remuneration Commission (SRC) has recommended a pay rise and also harmonised salary grades across the sector.

For the first time under the devolved system of government, employees in both the national and county governments will benefit from a review following a job evaluation.

The SRC has graded jobs in the entire public service into 19 categories, with the lowest employee in grade B1 earning a minimum of Sh14,442 and top earners in E4 getting a starting salary of Sh292,765 a month.

The new pay structure looks attractive and competitive in terms of job progression, unlike the previous structure that saw many stuck as promotions were dished out based on nepotism, bribery and cronyism rather than qualifications.

In a letter dated December 6, 2016, from SRC chairperson Sarah Serem and addressed to Public Service Commission (PSC) chairperson Margaret Kobia, the salary of the least-paid civil servant in grade B1 will rise from Sh11,553 to Sh14,442.

The highest-paid civil servant in grade E4, with a starting salary of Sh292,765, can earn up to Sh576,120 per month. This job grade includes civil servants holding the rank of principal secretary. However, all allowances will remain the same.

The new job structures, which will help bridge the gap between the highest and lowest-paid earners, is to be implemented in four annual equal phases with effect from July 1, 2017.

"As you are aware, the Salaries and Remuneration Commission has concluded the job evaluation undertaking for five of the seven sectors of the public service including the civil service," wrote Ms Serem.

"Subsequently, the commission has developed a harmonised salary structure that is intended to minimise disparities in the public service within the framework of fiscal affordability and sustainability, while at the same time reflecting the relative worth of a job." 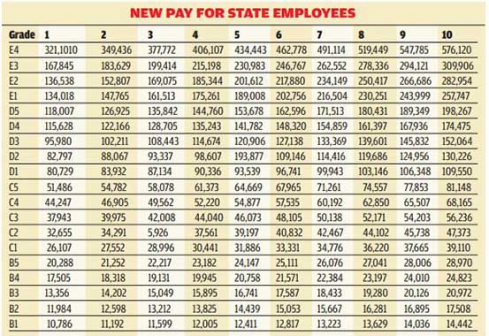 She said the commission was pleased to release to PSC the civil service salary structure for implementation.

"The four-year period has been adopted for affordability purposes," said Serem.

"Yes, I can confirm that all civil servants from both the national and county governments will receive a pay rise starting July 2017," she said. "But between now and June, we will have meetings and training programmes with all our staff, including the union, regarding how the new grading and banding structures will affect them."

Serem explained that the commission undertook a salary survey for purposes of bench-marking and developing an affordable and competitive remuneration and benefits structure for the public service.

Under the new structure, the civil service grades have been changed from the previous job groups A to P to a new and simpler structure whose highest grade is E4; the lowest is B1.

Serem said SRC adopted the Paterson Job Evaluation philosophy in developing the grading structure. Consequently, all jobs in the public service were mapped and graded to the Paterson Classic Model.

"The employing agencies in the public service are advised to use this salary structure for negotiating collective bargaining agreements with their respective unions within the framework of the implementation matrix," she said.

Kobia explained that the Government had already begun plans to implement the pay rise, which will involve a number of stakeholders including Treasury, Controller of Budget, all staff (national and county) and civil servant unions.

"Once SRC came up with the new grading system, we started working on an implementation plan," she said.

When the embers of fires stoked by a disputed election in 2007 died, two families in Molo were among thousands left homeless across the country.

Family in distress after body of Covid-19 victim is detained over Sh3.2m bill