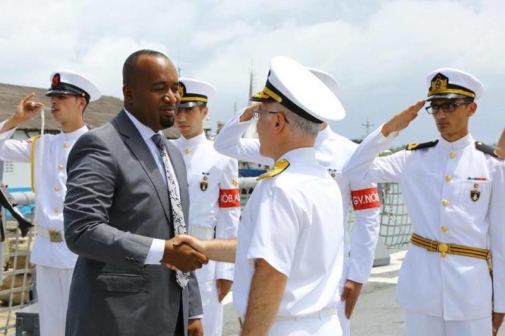 In a dramatic visit to America, Ali Hassan Joho – the irrepressible Mombasa governor – has called Jubilee’s bluff. In a public spectacle befitting the Prince of Mombasa, Mr Joho has left Jubilee’s Uhuru Kenyatta and William Ruto with egg on their face. That’s because the country’s top leadership has been publicly bloviating against Mr Joho. The governor – himself no shrinking violet – has demonstrated his cojones by reprimanding Mr Kenyatta in public. In turn, the Jubilee duo has issued veiled threats against people they alleged were drug barons. Barely two weeks ago, Mr Joho publicly repudiated Mr Kenyatta and Mr Ruto’s allusions that he was a drug kingpin. As if to prove his innocence, Mr Joho was received with open arms by the US.

Let me state this for clarity. A visit to the US – in which one is received in the inner sanctum of the Empire – doesn’t prove one’s innocence. However, it’s a fair assumption that the US government wouldn’t receive a known drug dealer – especially at a time of heightened scrutiny of visitors to the US. One can only draw two conclusions from Mr Joho’s triumphant visit to the heart of Washington DC – either Mr Joho isn’t a drug dealer, or the Jubilee regime and the US have no evidence against him. In either case, Mr Joho must be adjudged innocent – which is an ironclad legal principle. No one is guilty until an independent and fair court establishes the contrary.

This brings me to the dust-up between Mr Kenyatta and Mr Ruto on the one hand, and Mr Joho on the other. After the mysterious forcible extradition – more like rendition – of the Akashas to the US on drug charges, Jubilee raised the tempo of the anti-Joho drums. Even a kindergarten knew the ground was being prepared to cut off Mr Joho at the knees. It shouldn’t be lost on anyone that Mr Joho is ODM’s Deputy Leader and its colossus at the Coast. That the governor has neutered Jubilee at the Coast is a public secret. Decapitating him – by hook, and especially by crook – would be a huge victory by Jubilee. Cut off the head and the body will die.

Jubilee figures that without Mr Joho, ODM at the Coast would be in rigor mortis – as good as in the morgue. Jubilee’s view is that whatever yokes Mr Joho to ODM’s Raila Odinga must be broken. Then Jubilee would move in to decimate Wiper at the Coast and “pacify” the region. But Mr Joho’s American sojourn has upended Jubilee’s little plot. There’s no way the US Drug Enforcement Agency (DEA), the Federal Bureau of Investigation (FBI), Customs and Border Protection (CBP), Immigration and US Immigration and Customs Enforcement (ICE), and numerous other intelligence and law enforcement agencies would’ve let a known drug peddler in. Nor would the US Embassy in Nairobi have issued him a visa.

We know that Mr Joho is no mama’s fool. The media-savvy ODM honcho knew that strutting his stuff in Washington was Jubilee’s antidote – their comeuppance. They now must put up, or shut up. Mr Joho has gone into the belly of the beast and come out unscathed. In fact, he now smells like roses. Like Cristiano Ronaldo, the beguiling Portuguese footballer, Mr Joho is Machiavelli’s political equivalent. The man was born with the spirits of the Kamba kamuti. He returns to Kenya on a victorious chariot of fire showing Jubilee the middle index. His legend has grown tenfold. He’s going to be larger than Mount Olympus, more imposing than the great Mount Kenya. Like Ronaldo, whose silly fans are always intoxicated, Mr Joho is a conquering hero.

Some mosques in Mombasa have been accused of radicalising Muslim youth and leading them down the garden path to Al Shabaab. We know about the extrajudicial killings of Muslim clerics in the region. Only a fool would deny there’s a problem of radicalisation in Mombasa and other parts of Kenya. But it would be equally irresponsible to deny that Muslims are fighting back against Al Shabaab and radicalisation.

The key to ending radicalisation isn’t extrajudicial killings. Or the persecution of Muslims. In fact, those tactics are a great recruiting tool for jihadists. The proper response is what Mr Joho was doing in Washington – educating American officials and civil society about cooperative methods of fighting against extremism. Establishing links and marshaling resources and tools to combat radicalisation with education, development, and opportunity for disenfranchised Muslim youth.

A 21st century Kenya should never be thirsty for water. To create tangible wealth, we must eradicate thirst in our homes and farms as a matter of urgency.