Why we must allow KQ to beat the turbulence

I have an abiding love for my country Kenya. I have had the privilege of flying, visiting and working in more than ten countries, but home to me remains Kenya.

So, when I read questionable things said about my country, my people or even our national assets, I take these with a pinch of salt and always dig deeper for a better understanding.

The Cambridge dictionary describes a sophist as “a person who uses clever but untrue arguments to deceive people.” It further says that sophism is “basically a selfish act though, no doubt, a sophist would argue that it is done for the general good.”

I have seen a number of commentary about our national carrier Kenya Airways. Rather than take them at face value, I have done some homework and found considerable the (mis)information being peddled about KQ and the sophist definition is apt.

Rumour, conjecture, innuendo, and bar talk appear to have ascendancy over the truth. Social media is the convenient tool for the purveyor of half-truths and specious arguments.

KQ does acknowledge, that indeed, there are challenges some of which stem from past decisions that cannot be undone. But they are not intractable problems. Painting them in stark relief while ignoring efforts to resolve them, is duplicitous.

Take for instance, comparisons made between KQ and Ethiopian Airlines (ET). The sophist focuses on losses that KQ has sustained from 2012 and harps on profitability of ET. But conveniently left out, and that is in public domain, is the fact that ET enjoys affirmative action from the Ethiopian government which guards it against competition.

The sophist will not let on that wage levels in the Ethiopian economy are significantly lower. Yet it is public knowledge that in Kenya, professionals like pilots, engineers and accountants are not only paid higher wages for comparatively less hours, but some of them even have the backing of powerful unions who will not countenance the slightest changes in emoluments.

Another fact conveniently left out is that the aviation industry in Ethiopia is well integrated with ET, the airport, the catering service, hotel, and maintenance, forming a unit that feeds into itself seamlessly.

In Kenya, industry stakeholders proposed a similar consolidation of national aviation assets through the Kenya Aviation Management Bill. The Bill did not get traction in Parliament.
Yet KQ isn’t sitting pretty as its detractors would allege. Cognisant of the fact that it must compete in an environment that disadvantages it ab initio, it is mulling a series of interventionist measures that should place it firmly back on its feet.

During the 2021 full year results briefing, the KQ CEO presented the airline’s strategic measures to remain competitive. Consequently, it has set its sights on negotiations with lessors on key fixed costs elements to bring them down by between 20 and 35 per cent.  Borrowing a leaf from ET whose cargo brings in 55 per cent of revenues, KQ is working on growing its cargo business from the current 8 to 20 per cent in five years.

The airline is also restructuring its business through network optimisation, fleet rationalisation, staff productivity and growth on a sustainable basis. All things held constant, in a few years, the airline may break even, perhaps become profitable once traffic patterns get back to pre-pandemic levels. This information is publicly available on KQ’s corporate website.

Some sophists have been mistakenly lauded as patriots. Kenyans would be well advised to heed the words of  Samuel Johnson, celebrated lexicographer of English, who famously said, “patriotism is the last refuge of the scoundrel.” 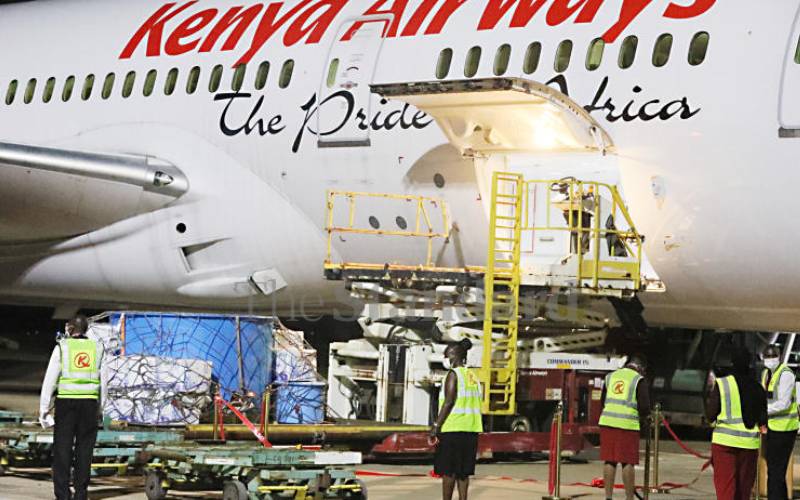 Premium KQ can weather current headwinds and regain the pride of Africa tag
The present reality of KQ includes debts to supplies and loans that amount to about $750 million (Sh85.9 billion).
Opinion
By XN Iraki
8 months ago
.