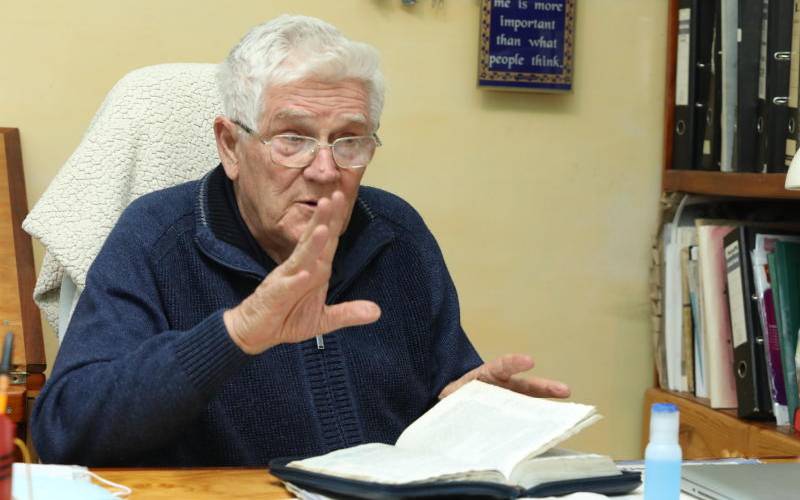 To the residents of Kieni in Nyeri County, Father Romano Filippi (pictured) is a godsend.

He is always ready to help when they need solutions.

The 80-year-old Catholic priest knows how to shepherd his flock and this ability has earned him the name ‘Muriithi’.

For his efforts, he was recently awarded a citizenship certificate 50 years after he landed in Kenya on January 31, 1971.

We caught up with Father Romano at St Peter and Paul Mugunda Parish in Nairutia on a Monday afternoon.

As we settled into conversation, there was a knock on the door. He went to find out who the guest was and how he could be of help.

“We are recording an interview. Can I talk to them later?” he asked.

About 15 minutes later, another knock on the door.

This time, a couple had brought an offering to be blessed.

Father Romano said a short prayer, bade them goodbye and resumed the interview.

This is a typical day for the Italian priest.

If his guests are not knocking on his door to ask for food or some other form of support, they are there to give back the little they have, appreciating his service to the community.

Father Romano was posted to Narumoru three years after he was ordained.

Since then, life for many in Kieni — a semi-arid region in central Kenya that alternates between a food glut when rains are plenty and empty granaries during drought — has never been the same, thanks to his transformational projects.

“What caught my attention at the station I was posted was cases of disabled children living in deplorable conditions.

“They were abandoned and that pricked my heart. I knew I had to do something, and the Narumoru Home for Children Living with Disabilities was built,” the priest said.

The children’s home is so dear to him that he has linked Italian medical specialists with the local authorities to offer medical check-up to people living with disabilities. This is done every year.

Father Romano is so passionate about helping his flock that he does not hesitate to spend his own money.

“This land had a few shrubs but he has changed it a place for education with water and health facilities,” said Julian Wanjiku, a resident of Nairutia.

The priest mingles freely with villagers, and he has been assimilated into the local Kikuyu culture.

Apart from the colour of his skin and accent, nothing else betrays his origins.

“I did not have any option. I had to learn the language the local people could understand. I am more African than Italian,” he said.

The priest said it took patience to learn Kikuyu words.

“In between the Mass, I would ask congregants for the Kikuyu name for the Holy Sacrament so I could mention the name as I said Mass.”

After his stay in Narumoru, he was moved to Gatarakwa Parish where he had to travel for several kilometres every Sunday to say Mass to parishioners in different churches.

“We built a church in Nairutia to save the people from covering the long distances,” he said.

The priest has been in Mugunda Parish, which has 10 churches, for 22 years,

He has made the place self-sufficient with a day secondary school for girls, a hospital with a dental unit and a work shop.

Father Romano said he identifies problems in the community and works with the people to solve them.

When the community was embarking on a Sh180 million Mutitu water project, locals had to make time to dig trenches for laying the pipes and construct a water intake in the Aberdare Forest.

“Getting people to work for the project allows them to own it.

“Now the users only pay Sh200 for sustainability of the water project,” he said.

The idea of the project, he added, was hatched after 20 girls in local secondary schools were admitted to hospital because of typhoid.

“I went to the Ministry of Water more than 40 times to seek plans and permits to draw water from the forest but the application file was hidden to compel me to pay bribes.

“Our perseverance worked,” he said.

The project saw him receive a Head of State Commendation from former President Mwai Kibaki.

After 10 years of working to ensure residents had access to clean water, Father Romano set his sights on building a school and a hospital in Nairutia.

He also spearheaded Mugunda Fighters of Aids, an initiative to fight HIV and Aids stigma which saw hundreds of people open up about their HIV status and seek counselling.

In recognition of his achievements, the Ministry of Interior through Health Cabinet Secretary Mutahi Kagwe issued him with a Certificate of Citizenship at the beginning of the month and declared him a Kenyan citizen.

“Your transformational work is commendable. You can now apply for your national identity card without any hindrance,” Kagwe said.

Father Romano said he might have entertained the idea of going back home 20 years ago.

But not any more. He is happy to spend the rest of his life in Kenya.

“I used to visit Italy every three years but I now travel to visit my family annually,” he says.

On whether he feels the need to be appreciated, he said: “I believe the great people of this world do not need to be thanked.

“Seeing the people utilise water appropriately is enough appreciation for the effort.”

Having lived a celibate life for over half a century, Father Romano opened up on the debate about allowing Catholic priests to marry.

“Priesthood is a calling and chastity is a gift from God. The misdeeds by some Catholic priests are only human weaknesses,” he said.

If the time comes when priests are allowed to marry, he said they should be ordained from a family setup.

“It might happen in future and I would not have any objection to the idea. But they should be allowed to decide before joining the priesthood.

“It is rather embarrassing to see a priest quit the vocation for marriage instead of getting a devoted family man to join the priesthood,” he said.

The country has so far borrowed about Sh610 billion from a sovereign bond that is denominated in dollars.

The Standard was unable to independently confirm these claims on the Tanzanian leader, who has made headlines for his stand on Covid-19.