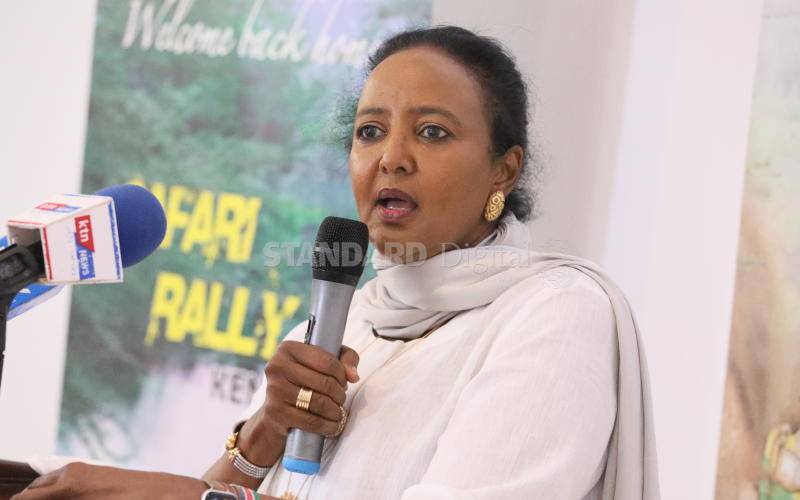 Sports Cabinet Secretary Amina Mohamed (pictured) yesterday confronted a contractor over the stalled Kipchoge Keino Stadium in Eldoret, which was to be completed by December last year.

The Sports CS who was shocked at the slow pace of construction asked the firm to hand over the project to a different contractor.

Amina who was accompanied by a team from the President’s Delivery Unit questioned why the Sh304 million stadium was delayed despite the ministry pumping Sh100 million. The contractor was hard-pressed to explain why he was not completing the project despite numerous visits by government officials since May last year.

The company’s director who was at the site when the CS inspected the project, said the delay was caused by the delay by the government in releasing money.

“Hand over the project to another capable contractor if you are not ready to complete it. I can’t be here every time and getting the same answers on why the stadium is not being completed?” Amina told the contractor.

The contractor said they were committed to completing the project but also wanted the government to ensure the remaining funds are released on time.

“You have swallowed Sh100m of government money and the work you have done does not measure up with the funds. You are embarrassing the government,” she said.

Amina made the contractor promise the project will completed before June. “You are speaking to me when facing the other side. How can I know whether you are lying or saying the truth,” Ms Amina said.

The CS said she would deploy a team from the ministry and Sports Kenya who will camp at the site to ensure the stadium which has been under construction since 2017 is completed.

Uasin Gishu Governor Jackson Mandago, who was also there, accused the contractor of not treating the project with the seriousness it deserved and said if he was unable to do what is expected of him, he should hand it over to another contractor.

Previous article
Don’t take the country to the dogs, says Raila
Next article
BBI: Which counties will dance to reggae?