Economic sectors where jobs were created and lost 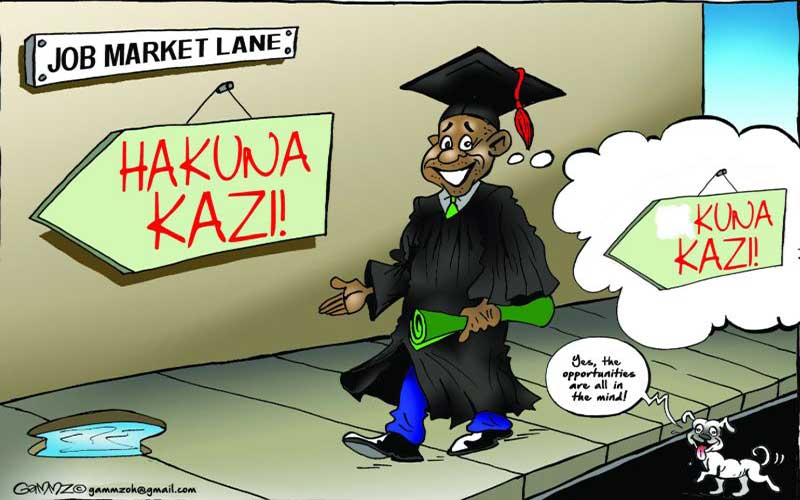 You stand a higher chance of landing a job in the food industry, with the latest official data showing that the sub-sector churned out the most jobs in four years to 2018.

However, data from the Kenya National Bureau of Statistics (KNBS) sounded a warning bell to those engaged in the manufacture of vegetable and animal oils and fats, as this sub-sector shed a staggering 12,743 jobs in the period under review.

The 2018 Statistical Abstract shows that the number of workers engaged in the manufacture of food products increased by 13,431 between 2014 and 2018, a boon for President Uhuru Kenyatta’s ambition to ensure food security and nutrition for all Kenyans by 2022.

Those with an eye for plumbing, heat and air-conditioning installation can be hopeful if past performance in job creation is anything to go by. This area experienced job growth of 52 per cent, with the number of Kenyans eking a living from the sub-sector increasing from 3,129 in 2014 to 4,753.

Other economic activities that had an impressive performance in job creation were in warehousing and storage, which experienced a 47 per cent growth in job creation, and data processing, web hosting and related activities, which employed an additional 2,502 people as Kenya strives to live up to the challenge of being Africa’s Silicon Savannah.

But the new data also revealed that there was a job heamorrhage in the manufacturing sector, with at least 15,000 jobs being lost in the last four years to 2018.

Extension officers who support crop and animal production have reduced, a situation that has contributed to the poor productivity in farming and livestock rearing.

In what is a worrying trend, only agriculture and manufacturing, which are at the heart of the president’s Big Four Agenda, have experienced negative growth in jobs.

Moreover, most of the jobs are being created at the expense of these critical sectors, with millions of shillings leaving farms and factories to low-volume employers such as IT. This pace of transition seems to have picked up since 2009.

The job losses touched 18 manufacturing sub-sectors in what has been blamed on the increased cost of production, including the high cost of electricity, punitive taxes, bureaucracy and high cost of credit, a big blow to one of Uhuru’s Big Four Agenda.

The affected sub-sectors include textile, manufacturing, fish, vegetable and fruit processing that have been identified as part of Uhuru’s job creation ambition under the Big Four Agenda. Manufacturing is expected to create one million jobs by the time the president leaves office in two years.

Current figures could even be worse given that the other affected sub-sector, sugar manufacturing, for example, has seen even more job losses owing to the closure of Mumias Sugar, once the country’s biggest sugar miller. Other sugar millers like Chemelil and Nzoia are struggling financially.

The government would like to create at least a million new manufacturing jobs. But this is quite ambitious given that in the last four years to 2018, only 20,136 new jobs were created and as many lost in what is turning into a zero-sum game.

The shining star is the manufacture of food, which increased by 68 per cent in the period under review.

With the economy going through some turbulence, President Kenyatta’s government has switched gears in the hope of turbo-charging the business investment.

Other job losers include the manufacture of cocoa, chocolate and sugar confectionery; distilling, rectifying and blending of spirits; manufacture of tobacco products; and sawmilling and planing of wood.

Growth of jobs in sectors such as plumbing confirms employers’ fears that while there is increased demand in such sectors, there are no skills to match it.

“Whilst there is an increasing and significant demand for skilled workers in Kenya, there is a mismatch between the skills needed by industry and skills taught in higher institutions of learning,” said Phylis Wakiaga, the CEO of Kenya Association of Manufacturers.

“Lack of relevant skills and competencies can be detrimental to the industry in terms of production and wastage,” she said.

The government has tried to cure this problem by promoting the growth of technical and vocational training centres.

Lately, high-ranking government officials have spent the better part of the working days trying to figure out how they can put money into people’s pockets, burning the midnight oil as they sought to end a cash crisis that has snuffed life out of several businesses and left scores jobless.

The president’s wrath has travelled through the government circles, culminating in an ultimatum by acting Treasury CS Ukur Yatani to State corporations and county governments to pay suppliers close to Sh137 billion by December 1.

“Cases of individuals and firms experiencing unmet financial obligations, including failure to repay loans, are widespread all over the country,” Mr Yatani said.

Bad loans as a fraction of total loans have increased from a low of 4.7 per cent in December 2012 to 12.5 per cent currently.