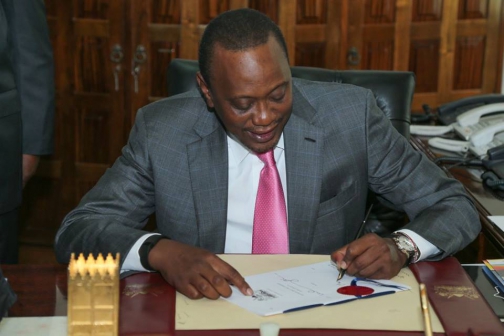 The National Employment Authority Act gives effect to Article 55(c) and 56(b) of the Constitution by providing a legal framework for the State to take affirmative measures to ensure youth and marginalized groups access employment and economic empowerment.

It establishes an Authority that will assume the functions of the National Employment Bureau whose mandate is to maintain a database for all jobless youth to facilitate their employment.

The Court so established is meant to expedite resolution of disputes relating to small monetary claims through informal and affordable avenues with adherence to the principals of law and natural justice.

The Mediated Version of the county governments (amendment) Act, passed by both Houses of Parliament, designates the physical headquarters for all the 47 counties in the country.

The Authority is envisaged to be responsible for matters relating to drought preparedness, mitigation and coordinated response to adverse effects throughout the country.

South African President Jacob Zuma, who was on Thursday excoriated by the country's highest court for failing to uphold the constitution, is no stranger to scandal.

By Robert Amalemba and James Omoro | 12 hours ago

The philosophy and thought behind our new design
Feedback