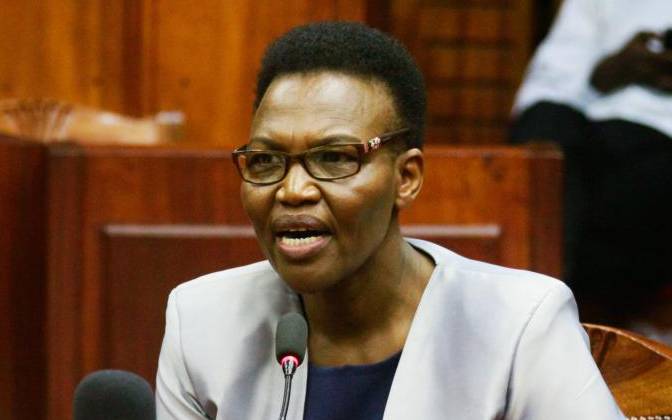 Kenyan ambassador to China Sarah Serem has penned an emotional statement describing how the lockdown at Chinese Wuhan City due to Coronavirus outbreak has affected Kenyan students studying in there.

Serem (above), who served as the Chairperson of the Salaries and Remuneration Commission, described the situation in China as dire and called on Kenyans to pray for their compatriots in Wuhan.

In her statement, seen by Standard Digital, Mrs Serem narrated the painful experiences of Kenyan students. She said that she has taken the students as part of her family as they hope that a longer-lasting remedy will be found soon against the outbreak.

Below is the statement from ambassador Sarah Serem to the Kenyan media:

Going through the daily updates of the impact of the coronavirus pandemic, reading the number of infections, a number of deaths, those in critical condition, and in Wuhan where I have close to a hundred students, sends a chill down my spine.

The anxiety and burden of bearing the emotional burden of these students cannot be described. I thought I owed my life to my God and to my children, who I knew were my reason for being and for my daily efforts, again I was wrong. Coronavirus has changed my world, for now, I embrace every student in Wuhan as my child and part of my family. Every breath of my life is a whisper of prayer for each Kenyan locked up at the Centre of the virus, I think of Olivia, the pregnant girl, think of Kevin and his family, his pregnant wife and little 3-year-old baby girl.

I think of the team of student leadership, who on daily basis have to bear and address every emotional moment of the students; I think of Wamboi, who's alone in her university and has nobody to reach out to. This lot has become my centre of focus, and my very reason to remain strong and resilient. My one and the prayer of the moment is "how long oh Lord will you allow this enemy of the human race to take precedence over your goodness.

Forgive us oh Lord and deal with us not according to what we deserve, but in the unmerited mercies of The Lord Jesus Christ. Insulate every one of my children in Wuhan and put a wall of fire around each one of them. Give us hope and peace that surpasses human understanding and teach us to number our days, in love.”

As of Monday, February 17, deaths from the coronavirus in mainland China had shot past 1,700 and as the number of cases rose above 70,000.

Countries such as the USA, Japan, UK and recently Nepal have evacuated their citizens using a chartered plane from various Chinese provinces and cities.

However, on February 3, Kenya’s Ministry of Health alleviated fears that the Kenyan students in China were at risks of being affected by the virus. The government said that it was in constant communication with Beijing to keep checking on the learners.

“Our embassy in Beijing shall continue to offer material and moral support to our students in Wuhan City,” said the Health ministry in a statement.

It then proceeded to say that the Ministry was vigilant to prevent the entry of the virus in the county.

“The surveillance system remains on high alert at all points of entry and health facilities. A two-tier screening is being conducted on all inbound passengers and crew at our international airports. To fortify the State’s response, we’ve enhanced screening at our border points and seaports,” read the statement.

China ambassador to Kenya Wu Peng on February 13, while speaking at a function of Kenya Editors Guild gave a reassurance that the embassy was committed to employing preventive measures to keep Kenyans safe.

He said: “We have taken these measures to ensure that they do not carry the virus from China to Kenya. I and the embassy has kept close touch with the Government of Kenya, including Ministries of Foreign Affairs, Health, Transport on the prevention and control of the disease."

The virus broke out late last year in Wuhan City and has since spread to over 25 countries. Last week, the first coronavirus case in Africa was noted in Egypt after a foreign national was quarantined after testing positive for the virus.

By Valentine Zablon 20 mins ago
Premium Health: Why is everyone in glasses?