Fact Check: What’s the actual health risk in a bowl of instant noodles? 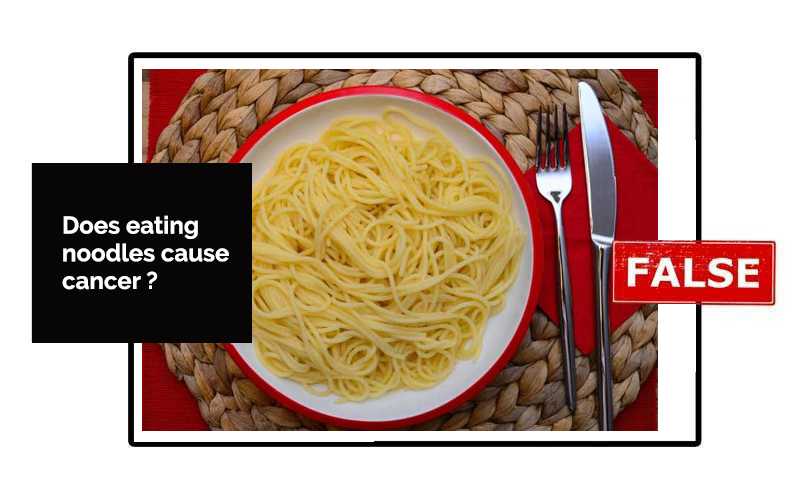 A reader contacted the Standard Fact Check Desk to verify if scientists had really warned people to stop eating instant noodles due to cancer and stroke risks.

She attached the link to a 2019 blog entry on DailyHealthPost that warned of this, and adding that the meal – a staple for college students and young bachelors – offered very little, if any, nutritional benefits.

There was also a link included to a video that’s been viewed thousands of times and purports to show what happens to the noodles in the digestive tract.

“Dr Braden Kuo of Massachusetts General Hospital, who is a gastrointestinal specialist, has done an experiment with a time-lapse video inside the stomach comparing both preserved and fresh instant noodles. After two-hour digestion, the results were staggering ....” it said.

A simple search online and you’ll find the claim, with different severity warnings, is well travelled. One narrative claims noodles have a higher chance of causing cancer and is connected to high blood pressure, stroke, heart attacks and “a lot more”.

The DailyHealthPost article has been shared 1,700 times from the blog and even further on social media.

The overriding ‘evidence’ across the stories is that a synthetic additive called tert-Butylhydroquinone (tBHQ) is what causes cancer and other diseases.

The Standard Fact Check desk bought different samples of instant noodles and confirmed they contained tBHQ. But according to the nutritionists we spoke to, tBHQ is put in foods to expand their shelf life. It stabilises the foods’ nutritional value, freshness flavour and colour.

This is corroborated by a study by the faculty of Pharmacy and Pharmaceutical Sciences at the University of Alberta.

In a peer-reviewed research paper titled Chemoprotective and Carcinogenic Effects of tert-Butylhydroquinone and its Metabolites, the university extensively explored the additive.

“It has been commonly used as a synthetic food antioxidant to prevent oils and fats from oxidative deterioration and rancidity due to its potent anti-lipid (fats) peroxidation activity,” it says.

The maximum level of tBHQ that is considered safe to be added in fat products is 0.02 per cent, with an acceptable daily intake of 0.7mg/kg body weight as prescribed by the Joint FAO/WHO Expert Committee on Food Additives (JECFA), the study notes.

“TBHQ metabolites have been shown to exert multiple physiological effects, including those that protect patients from the toxic effects of anti-cancer drugs, and at the same time causes cancer,” the study says.

The study adds that JECFA has pointed out the likelihood of consumers ingesting tBHQ that exceeds the acceptable daily intake, which is where the risk lies.

Studies on rats and mice found that the additive, if highly consumed, can cause neoplastic disease – an abnormal growth of cells that eventually causes tumour growth. This can be in two forms: benign (not cancerous) or malignant (cancerous).

Nutritionist Gladys Mugambi, who heads the division of health promotion at the Ministry of Health, confirmed that the preservative is dangerous when consumed in excess amounts.

“I cannot confirm whether the levels in the noodles are high in Kenya. We may have to consult the food safety team,” she said, adding that tBHQ was not only limited to instant noodles.

Her advice? Eat natural foods, especially vegetables and fruits that have nutrients that help the body fight the free radicals that may be brought on by chemicals and preservatives, and “processed instant foods should supplement when necessary”.

“I would advise university students not make it a habit to consume instant noodles on a daily basis. They contain fats, which can lead to obesity which may lead to cancer,” he said.

“In Kenya, most of our foods have preservatives which aren’t safe for human consumption if taken in excess. So it always goes back to moderation. We shouldn’t have one type of meal but consume a variety each day.”

When we asked if he could advise against eating noodles, he said; "It is not easy to tell whether there are people affected. There was a time some were saying we should stop taking sausages. But sausages can only be harmful if you overeat them. Just like sugar when taken excessively can lead to diabetes. It doesn't mean we should stop taking sugar. We just have to moderate the quantity we consume."

A study in South Korea found that regular consumption of instant noodles can cause high blood pressure, high blood sugar, excess body fat and abnormally high levels of cholesterol – a risk that holds true for all foods high in sodium and saturated fats.

We found no studies or reports of doctors warning against instant noodles. Towards the end of the viral video being used to propagate the falsehood, the doctor says that he is not familiar with any health risks that can be triggered by the meal and that he is also eating instant noodles.

As such the claim is FALSE.  What doctors advise is for one to be cautious on the amount consumed.

It is safe to consume at least 2 packets of nodules weekly.