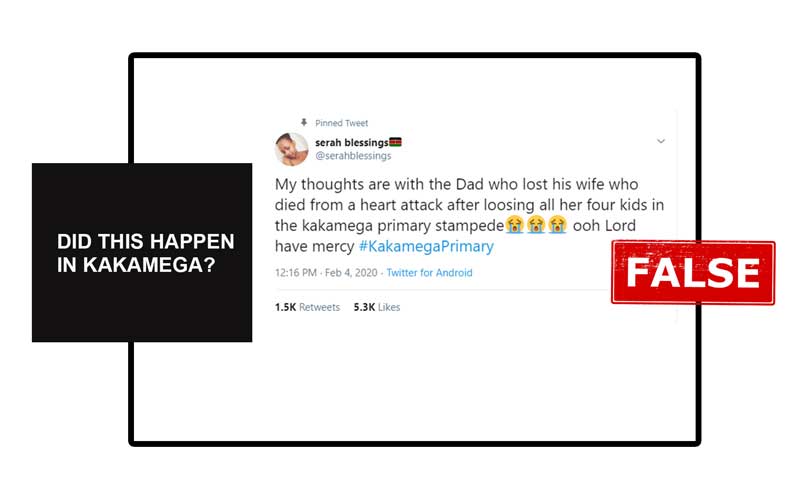 A shocking story has been going round on social networking platforms alleging that a mother died of a heart attack after getting the news that her four children had died during the stampede at Kakamega Primary School on Monday, February 10.

The Standard Digital Fact Check desk can authoritatively confirm that the report is false.

We have traced the story to a tweet that was posted on Tuesday, February 4, a day after the Monday evening tragedy. The post was done by @serahblessings. As at the time of publishing this fact check, the post has been retweeted over 1500 times and has 520 replies.

The tweet said: “My thoughts are with the dad who lost his wife from a heart attack after losing all her four kids in the Kakamega Primary stampede. Ooh Lord have mercy”.

The false claim was further amplified by a national TV station that controls a 21 per cent share of Kenya’s television viewership when they discussed the issue on Tuesday. No attempt was made to name the mother or identify where she was.

The Standard Digital Fact Check Desk contacted the police who are investigating the incident that left 14 pupils dead and asked if a single-family had lost four children.

They refuted the claim and furnished us with the names of all the 14 children who have died - nine girls and five boys. Twelve of them were Standard Five pupils while two were in Grade 4.

Kakamega central sub-county commander, David Kabena said the claim of the mother dying was a social media rumour that should be dismissed with contempt.

“I don’t understand why people take advantage of a calamity like that of Kakamega primary and start spreading propaganda just to create traffic for their blogs,” he told us, asking those who were using the claim for traction to their pages to stop.

“It is adding more pain to the affected families of the 14 pupils,” he added.

The information that no family lost four children was corroborated with interviews by Standard journalists in Kakamega. Our reporters spoke to all the parents of the 14 pupils.

Kabena said that they will track down those spreading the rumour and prosecute them.

According to the Ministry of Education, it was established the stampede took place on the second and first floors of the five-storey block, which has two staircases used by both teachers and the learners.

Education Cabinet Secretary George Magoha promised to make public the outcome of the investigations by Monday next week.

“In the meantime, we shall establish a counseling desk for the affected parents and pupils,” the CS said, adding that the State would take care of the bills of pupils admitted in hospital after the stampede and co-ordinate with the county government to foot burial expenses for the dead.

The school has 51 classrooms against a population of 3,128 pupils in lower and upper classes and another 296 pupils in Early Childhood Development Education.

The Deputy President William Ruto, who visited the school yesterday, confirmed that 14 pupils died, 46 were injured, 37 pupils were treated and discharged, two learners are still at the intensive Care Unit (ICU), three are in surgical wards and three others have been admitted at the general wards.

The requiem mass for 13 of the pupils will be held on Friday, February, 7.

One pupil, Nailah Kiverenge, was buried on Wednesday, February 5 at the Kakamega Muslim Cemetery. 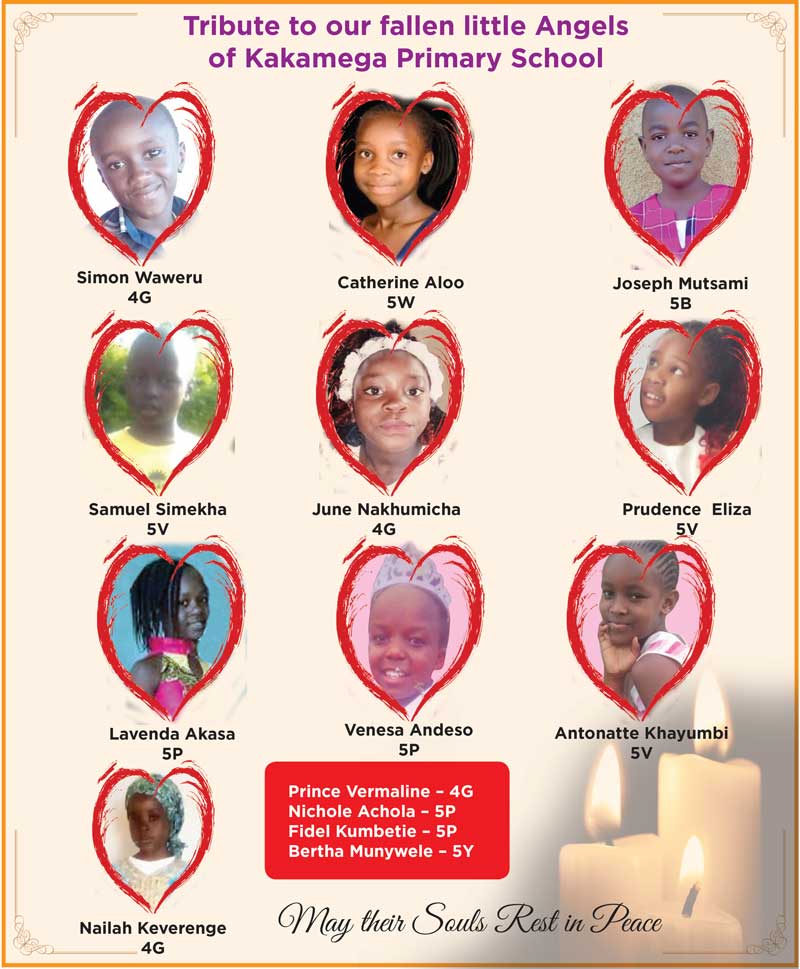 This is an initiative of The Standard Group to combat fake news, misinformation and disinformation. If you have something you want us to look into, reach us on [email protected]