I have had four near brushes with death but managed to escape it by a whisker: Musa Jakadala 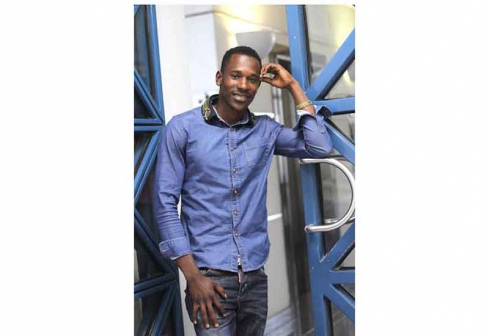 The 28-year -old singer who bares ambition as his middle name and is determined to succeed where his predecessors failed is advocating for peace among Kenyans and youths in particular through one of his new songs.

Q: Tell us about your new project ahead?

MJ: It is a grand concert aimed at launching my new album Chuny Dhano ((The heart of men) recorded at Barikiwa Studio, Kariobangi South. For only the sum of Sh 500 per person the much anticipated event scheduled to take place on December 9, at club Egesa East Villa, Nairobi will feature a number of renowned musicians who will use the opportunity to give revelers the best of entertainment from 7 pm until dawn. They include Lady Maureen, Osito Kale, Omondi Long Lilo, Odhiambo Tusker and Ogina Koko. Emcees are Jalango and Pengle Jaluo Number Wan.

Q: What makes the occasion so special that your fans would want to attend?

MJ: The fact that the launch will be such a big affair.

With the changing trends in music I strive not to let my fans down and that is why I give out my best during shows. To achieve this I practice and rehearse wherever I am, be either while driving, in the house, in the bedroom or at the studio with my band. I always give my performance intensity before I step on the podium. And the results are amazing. In other words, I’m a self-conscious singer with a style that is diverse, poetic, psychedelic and original.

Q: Love appears to be the main theme of your new album not to mention the previous ones?

MJ: Life without love is unbearable. You must be loved and love others in order to live a meaningful life. Love is a sweet thing and very important to a human soul and that is the reason people get deeply moved by love songs. I also have a new song which advocates for peace among fellow Kenyans especially during this volatile political situation.

Q: What is the inspiration behind your songs?

MJ: Every day I live for my kids and family. When I wake up I ask myself if my two sons would be comfortable listening to the new song I am drafting. Will they be inspired or dejected with the lyrics and that is why I inject my numbers with the message of love, hope, peace and harmony for the coming generation.

Q: What makes you different?

MJ: I believe I tell it as it is through my music which is properly arranged, carefully thought, emotional, scintillating and highly danceable and be able appeal to fans of diverse communities locally and abroad.

Q: In what ways has your newest music changed from when you first started?

MJ: I have improved all around as far as my mixing, songwriting and myself as a person goes. When I first started I just wanted to make music, but I didn’t know much about anything so I made what I heard other musicians making. I couldn’t really be myself because I didn’t know who I was. Now, I know a lot more and I am more confident in my ability to not only write and record my lyrics, but to mix down my vocals and take chances when it comes to manipulating my voice and my subject matter. My music has become a part of my lifestyle and not necessarily a hobby anymore. I feel like I have to make music just like I have to sleep.

Q: It’s been a hard climb to the top. How did you manage?

MJ: I owe my success to God. I am equally grateful to my fans for their unwavering support. Not to mention my family and friends who stood by me during my trying moment.

Q: With every success comes challenges, what has been the challenges for you?

MJ: Initially the main challenge was finding ways of meeting the expectations of my fans. I had to come up with several new songs to remain relevant and outshine the competition. Meanwhile, my tight schedule has denied me the chance to interact freely with my fans and friends something that has not augured well with them.

Apart from a clique of artists who have often viewed me in bad light owing to my fast rising fame and high demand I have had to deal with con promoters who are known to use my name to advertise their shows in order to lure fans.

Q: You are one person who appears to have nine lives going by your endless near brushes with death?

MJ: Yes. It is by the grace of God I am alive today. The year 2016 remains a black one for me having had two near brushes with death but managed to escape it by a whisker.

This year my car lost control ramming into a lorry along Mombasa road something that saw it written off. And again hardly two weeks ago, the vehicle we were travelling in was involved in an accident on our way to Oyugis. In the process two of my band members were injured.

Q: Rumor mill has it that your love life is in shambles?

MJ: (laughs then pauses) As a public figure people are bound to say all kinds of nasty things about you and there is little one can do about it. On my part I choose to ignore rumor- mongers whose intention are to tarnish my name and career through bad press. Their rumors mean nothing to me. Backbiters will always remain in their position as I am happy to be in front of them.

Q: What are your future plans as far as music goes?

MJ: I plan on becoming one of the best Ohangla musicians in East and Central Africa if not Africa as a whole with the role of educating the public through my music.

I want to inspire upcoming young singers through my music by making them realize that nothing is impossible in achieving their goals in life as long as they are determined to do so. All they need to do is focus on their goal, go for it, work hard at it through patience and perseverance besides never giving up and they will be able to achieve their dreams.

Q: Let us in on your musical career?

MJ: I started performing in 2010 with The Blaze Africa band founded and headed by Agoddy Mayaka and the late Odongo Mayaka at Club Village Kayole for two years as one of the lead vocalist. In 2013, I released my debut single Nyar Alego.  I later initiated my own band of six musicians – Super Latin Boys and was based at Jodalla’s club Dandora. At the time we were paid the sum of Sh6000 during our performance and was forced to hire musical equipment’s worth Sh2500.

Not willing to give up with time we moved to various clubs within Nairobi’s CBD where we command not less than Sh 70,000 per concert. And like they say the rest is history.

Q: Do you have a family?

The second last born in a family of eight, born of Mrs Consolate Obok and the late Joseph Obok, I hail from Ugunja in Ugenya.  Life was good until the death of my father who was the sole breadwinner. At the time I had just completed class 8 at Ulwami Primary School, Nyanza. For a year I was forced to stay back home due to lack of school fees doing menial jobs. However in 2006, I came to Nairobi with the help of a friend. Once there I settled in the sprawling area of Kayole estate and spent close to four months being trained as a mechanic at Damco Auto Garage Tushauriane without pay. I decided to quit and join in car wash business that belonged to the same garage during which I made some monies and decided to enroll back at St Agnes High School Kayole, Komarock in 2006. In 2009 I completed his KCPE and joined New College to pursue a diploma course but dropped out after first year to pursue music.

I would love to see Kenyan musicians united and work together to support each other. As for my fellow youth; is to time to be our brothers/ sisters keeper especially during this volatile political situation.