Gossip rules for every girl out there 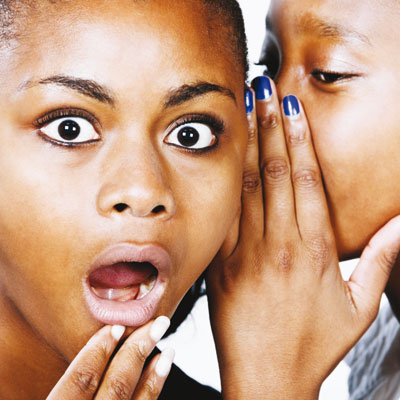 Although there are those who manage to completely hold themselves back from engaging in gossips, most women would be loyal members of gossip sect if there was any. Below are some gossip rules every rumourmonger must know:

• Never gossip about your best friend

If it is difficult for you to abstain from this rule, distance yourself from any gossip scope lest your tongue slips.

The gossip might be juicier or you and your best friend might not be on speaking terms, still, let the secrets remain buried deep in your mind. Revealing what your best friend told you in confidentiality portrays you as a fake, even to your gossip mates.

He could be your brother, your man or your favourite cousin, keep your hearsays away from their ears.

Men hate gossips; at least most of them have proved the theory. Please save the men in your life the trouble of hearing what you think about who cheated on who.

•  Never get personal with gossip targets

When told information about somebody, if it affected you or somebody close to you, do yourself a favour and keep your emotions under control. Holding a grudge, openly judging the person and using what you were told against the gossip target will add you enemies in your social basket.

•   Never gossip with just anyone

Choose carefully whom you gossip with. A friend might go ahead and share the gossip with other people then end up gossiping about you. There is also the daring snitch who informs the gossip target everything you said about him or her. This leads to my next rule….

The gossip target might know what you said about him or her. Be ready for enmity and distrust between you two.

•   Never be a gossip machine

As much as gossiping can be addictive, talk about other things too. Add value to your friends’ lives, rumour mongering doesn’t. Avoid also jumping in with a gossip every time people’s names are mentioned. Being identified as the one who only gossips is not appealing. Plus your own friends would be keeping a distance from you.

•  Never gossip as an escape route

With some girls, when somebody wrongs them, they see it as a gossip opportunity. Don’t be like them.  Sometimes it is wise to shut up and see ways to work things out.

Unless there is proof, take every gossip with a pinch of certainty. Do not start investigating whether it is true or not. Yours was to listen and leave it at that.