#MCM: Comedian Njugush- All about cracking your ribs when it comes to comedy 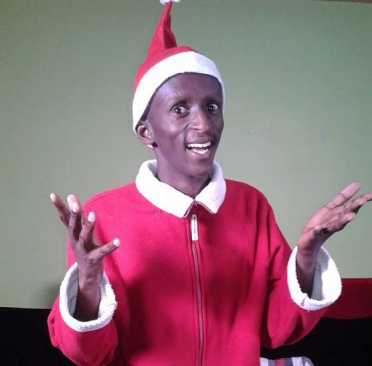 Quite the starring in the local parody soap ‘Housewives of Kawangware’, Njugush recently unveiled that he never though comedy would be such a lucrative source of income. “I knew I was funny, because my friends would look at me and laugh at my jokes during chill time, but I never quite though that I would get a job off it,” he said.

First born in a family of two children, his roles became fast defined as he was growing up because he had to take care of his younger sibling. Positively so, this made him quite responsible, a trait which he practices to date even while on set.

In pursuit of an education, Njugush admits that it was never an easy road as he had to attend many primary schools, sitting his KCPE at Kandengwa Primary School, then his secondary education at Naaro High school.

Despite many actors and actresses who practiced their art in high school thanks to drama and music festivals, his school scrapped off the funkies after realizing that the boys got mischievous at trips.

“Secondary school was no joke! Our headmaster realized that the only way to deal with adolescent boys was by cutting off their funky days so all we could do was ‘preserve’ our talents till after KCSE. ”

Fortunately his passion for the arts and media saw him pursue a degree in journalism at the KIMC College during which he joined a play dubbed ‘Quagmire Royal’. Little did he know this would be his key to the acting industry.

“In Quagmire Royal I played the role of an old man, and I think my physical features gelled well with the role. Fortunately some notable producers and film makers were present at the show, and because of my character, I got called to join Hapa Kule and House wives of Kawangware.”

Overtime, Njugush’s stage name has become a part of his daily brand with people often associating him with comedy wherever he goes. However, he is quick to add that his humor led him to become an event emcee with the only cons to his career being that people are not able to tell when he is joking from seriousness.

“Sometimes, especially where money is involved, I have to insist that I am serious lest my payments become a joke as well.”

In a competitive industry where many struggle to enter the market, Njugush says he is blessed to have gotten this opportunity and he is forever grateful to those that believed in him, with special thanks to his girlfriend who has been an important support to his career.

With a fast blossoming career, Njugush is our MCM today. Catch him every Wednesday on the Housewives of Kawangware as he cracks ribs.

Fashion Forward: Celebrities embrace extreme outfits
Features
By Kirsten Kanja
54m ago
Tems, the sing star to beat
Showbiz
By Kirsten Kanja
15h ago
Karen Nyamu: Samidoh is an amazing father to our kids
News
By Vincent Kejitan
15h ago
East Africa's finest: One on one with Muthaka
Showbiz
By Boniface Mithika
16h ago
Michelle Ntalami's advice to Nairobians: Focus on making money, love can come later
News
By Standard Entertainment
17h ago
.