Bob Collymore’s wife clears the air about her marriage 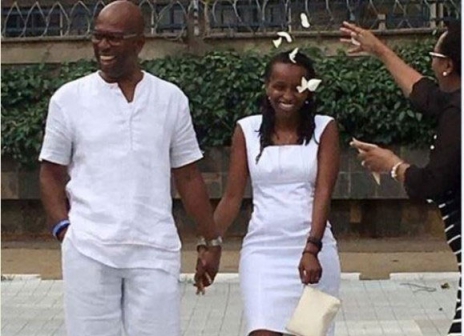 Safaricom CEO’s newly wedded wife, Wambui Kamiru, has finally responded to her critics in a letter addressed to her children.

In a Facebook post titled A Letter To My Children, she sought to clear the air about her relationship with Bob.

“My marriage to the man that I love and respect had some interesting effects on the conversations on Twitter and Facebook (these may be obsolete by the time you are reading this). However, for a few days there, lots of Kenyans talked about “tribalism” and some admitted their desire to leave and go to another country because of how unbearable it can sometimes be to live in a society where people first judge you by your “tribal” origin. A lot of people refused to be part of the conversation, arguing that it should no longer matter. These people are the reason why we will still have a country to call home,” read part of her message.

The couple tied the knot in an invite-only affair held at a private residence in Kitisuru, with only family and close friends in attendance.

Wambui is the founder of The Art Space, an independent commercial art gallery situated on Riverside Drive, Nairobi, according to her website.

MDQ: Why I moved Blankets and Wine to Kasarani
Showbiz
By Boniface Mithika
18h ago
Why we put phones off when flying
Lifestyle
By Jayne Rose Gacheri
19h ago
Celebrities who have their body parts insured for millions
Showbiz
By Fay Ngina
19h ago
Man charged in Takeoff killing says he's innocent
News
By AP
Dec. 6, 2022
Man who shot Lady Gaga's dog walker gets 21 years in prison
News
By AP
Dec. 6, 2022
.