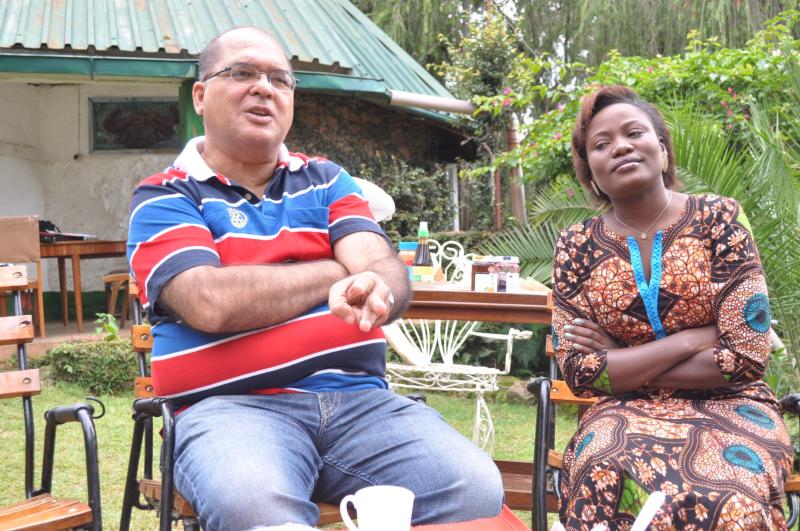 Kisumu East member of parliament Shakeel Shabir and his wife Nancy Wanyonyi. Shakeel maintains that Asian community should allow their daughters to marry men from outside the community. PHOTO: COLLINS ODUOR

Kisumu East MP Shakeel Shabbir has claimed that some members of the Asian community want to kill him because he married a Luhya woman.

The MP told The Nairobian he has been singled out for elimination because he has gone against the “norms and traditions of the Asian community” and has since put in place security measures for his family.

“They have been sending me threatening text messages, and some have even been daring enough to tell me this to my face,” Shabbir said.

He added that even his wife has received threatening phone calls and text messages from Indians who are not happy about their marriage.

“What infuriated them more are the comments I made, and were published in the The Nairobian, that most Indian girls are sexually frustrated because their parents lock them in the houses and don’t want them to mingle with young men from other parts of Kenya,” he said.

Shabbir has further said he will continue campaigning for intermarriages since “we are all Kenyans, regardless of tribe, wealth or religion. We should intermarry and build stronger ties with our neighbours.”

He however said he has not reported the matter to police, since he believes, given an opportunity with the people who want to kill him, he might convince them to change their thinking and allow men from all over Kenya to marry into their families.

The chair said he has already contacted the Hindu Council of Kenya to address the matter.

“The people threatening me will be able to listen to the Hindu Council of Kenya, as opposed to the police,” Shabbir said.

He named one wealthy businessman as the key aggressor inciting other Asians against him.

In an earlier interview with The Nairobian, the alumnus of Nairobi School said there are “so many sexually frustrated Indian women” in Kisumu.

“This is because their fathers have locked them in the house and they don’t interact with men,” Shabbir had said, adding that this is why the sexually frustrated Indian girls turned to drivers, houseboys or gardeners to satisfy their sexual urges.

“I have seen a lot of that happen in Kisumu. The girl then gets pregnant and her parents force her to abort. Some are even forced to claim they were raped by the workers. I think Kenyans should open their eyes and think out of the box,” said Shabbir.

He said the main reason many Asian girls don’t marry local men is because of lack of exposure.

“Everybody, even you, is afraid of the unknown, and most Indian girls lead a sheltered life. They don’t interact with anyone outside their families, but if they had a chance to hang around African men, I am sure many Indian girls would happily marry a Bukusu, Luo or Kikuyu,” said Shabbir.

He said that for the last eight years, he has been married to a Bukusu woman.

“I have never been happier in my life. The last eight years have been pure bliss. I have come to learn so much and appreciate the African culture and my wife has also come to appreciate my culture,” said the trained accountant with a bachelor’s degree in business management from Middlesex Polytechnic in the UK.