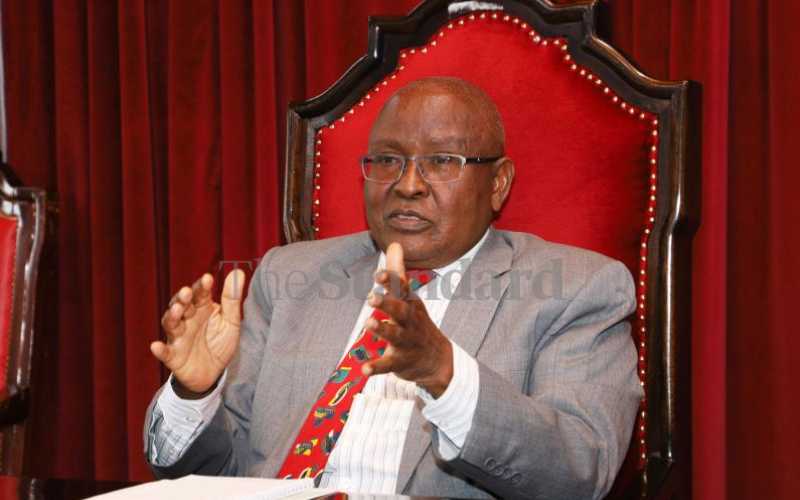 Appointed to head the cash-strapped institution on October 5, Prof Kibwage is now scratching his head on how he will turn around the 82-year-old college grappling with massive debt.

Among the debts is a Sh856 million tax arrears owed to Kenya Revenue Authority.

In 2019, the institution entered into an agreement with the tax collector to offset the arrears in a year. It surrendered a title deed as security.

In documents obtained by The Standard, the university management explained that it entered the agreement with KRA on September 26, 2019, after the institution’s former vice-chancellor was arrested over the debt.

“It was agreed that the university shall immediately deposit the title deed for the land known as Baringo/Kimalel/3 approximately 642 hectares as security for the tax liability amounting to Sh816,741,693,” reads part of the agreement.

Others who signed it are Paul Mutuku, the KRA commissioner of legal services, Former Vice-Chancellor Rose Mwonya and Kibwage, who at the time was Deputy Vice-Chancellor Administration Planning and Development.

The deal stated that for the institution to get back the deed, it was required to pay Sh40 million immediately after the signing of the deal and the rest to be settled in equal instalments for a period of 12 months.

It was further agreed that should Egerton fail to remit any of the installments, KRA was at liberty to demand the entire debt.

In the same month, Egerton Sacco moved to court seeking orders to compel the institution to remit Sh434 million owed to its members.

The institution’s finance officer Moses Ouma, then revealed that the university has been forced to default in some of its statutory obligations.

It had failed to remit pensions, Pay As You Earn and NHIF owed to its staff that has accumulated to Sh3.6 billion.

Egerton Sacco CEO Jane Kaimuri said they had to use other mechanisms to recover some of the money owed to them.

She said the institution owes them around Sh240 million dating back to 2018 without interest.

“We even stopped using the university to make deductions to the Sacco; members do direct debit from their accounts since they used to be deducted but the same was not being remitted,” she said.

She said they hope the institution will start paying the debt having paid Sh6.6 million this year.

The debt, she said, has been accruing interest at the rate of five per cent a month according to the Cooperative Societies Act.

Workers at Ngongongeri Farm are also yet to receive their salaries for 12 months now, despite continuous production from the farm.

One of the farmers, who spoke on condition of anonymity, said efforts to address their issues have fallen on deaf ears.

“We are a frustrated lot, for 12 months we have gone without salary but we still work and the farm is still producing. We don’t know where the money goes,” he said.

Prof Kibwage admits that the staff are yet to receive their salaries and arrears.

The VC said they normally have a meeting with KRA, the last being last month to explain to the taxman the situation at the university and what the institution can manage.

The surrender of the deed, he said, was a gesture of goodwill and they were honouring the agreement.

“We have continued to honour the agreement and had thought we will be able to clear within a year but we haven’t managed,” he said.

He said the amount has been reduced to around Sh500 million and they are paying at the rate of Sh10 million a month and hope to clear it soon.

He noted that during negotiations they expected that a number of students in the institution will be funded to enable it to get money.

The university, he said, was expecting at least Sh900 million then but the money was not released.

On statutory deductions, the VC said they are still grappling with settling the debt, and this should not be misconstrued as refusal.

Kibwage admits that the university does not have sufficient funds to run.

He described the challenges facing the university as issues that have piled up over a period of time and cannot be resolved by a stroke of a pen.

Further, he said the number of privately sponsored students admitted to the university has been going down since 2017.

Thus, the roadmap to recovery has taken long as it has been hampered by a lack of resources.

He said if the situation continues he will have to reduce expenditure to what is necessary to deliver services.

The university, he said, has been forced to stop some allowances as part of austerity measures and is in the process of right-sizing staff to ensure only critical ones are left.

“We had asked for retrenchment, the Treasury agreed but we have no money,” he said.

He noted that the university is retrenching through two means and only academic and critical staff will be replaced. Administrative and other staff he said when retired are not replaced. Those on contract, unless they are critical will have their employment terminated.

He said the university is also after revitalizing its income-generating units though some had run down completely.

“We continue to talk to our staff that we need to work together as a team to start rebuilding the finances of the university,” he added.

Kibwage revealed that they are negotiating with some of their debtors to allow them time to try and reorganize and build the institution’s resources.

He said students should also pay fees as required to enable the college to plan well. “In the short term, we are trying to stop the bleeding otherwise the institution will die,” he said.

National Transport and Safety Authority (NTSA) and the European Union (EU) have launched a campaign aimed at reducing road accidents.