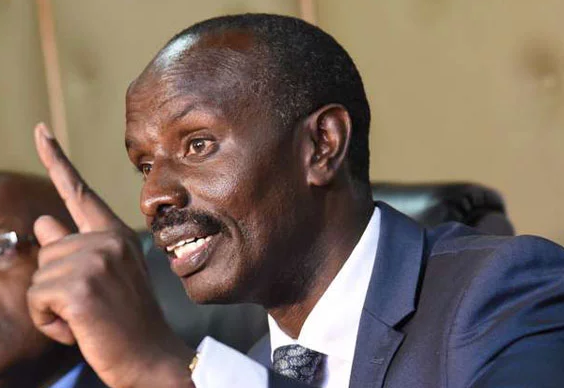 The fight between Knut Secretary General Wilson Sossion (pictured) and the teachers' employer escalated on Friday after the union official was finally deregistered and banned from teaching in Kenya. Teachers Service Commission (TSC) Chief Executive Officer Nancy Macharia in a Gazette notice dated October 29 and released today said Sossion will never teach in any Kenyan school. “Pursuant to section 30 of the TSC Act, the Commission has removed the name of the individual named hereunder (Sossion) from the Register of Teachers. Further, under the law, the individual cannot engage in teaching in any school,” reads the gazette notice.

This means that Sossion of TSC number 340096 is officially prohibited from teaching any Kenyan child in either public or private institution of learning. Sossion dismissed the move by TSC terming it inconsequential. Sossion said he is still the bonafide Knut secretary-general and noted that striking his name from TSC register does not affect his position in the union. TSC seems to have exploited a recent ruling after Employment and Labour Relations Court declared that the TSC was right to remove Sossion from its roll. The court affirmed that Sossion’s interests in Parliament were that of the party (ODM) and not teachers as he had argued.

ODM nominated Sossion to the National Assembly to champion the interests of workers. Justice Nelson Abuodha held that Sossion’s nomination put him on partisan political activity, which goes against his employer’s regulations. “TSC has ably demonstrated that Sossion’s association and acceptance of nomination as MP on ODM party ticket went against its tenets as an institution in charge of regulation and discipline of those in the teaching service,” ruled Justice Abuodha. Justice Abuodha further ruled that: “Teachers code of conduct and ethics (2015) require teachers to maintain political neutrality at all times and not act in a manner that may compromise or be perceived to compromise their neutrality.” Regulation 187 (1) and (2) of the Code of Regulations for Teachers also dictates that teachers who seek elective positions and hold trade union positions must resign or retire from service. In fact, the deregistration renders them non-eligible for leadership at the teachers' unions.

SEE ALSO: We require a new CBA to empower teachers and enhance learning