Pupils at risk as schools now disasters waiting to happen 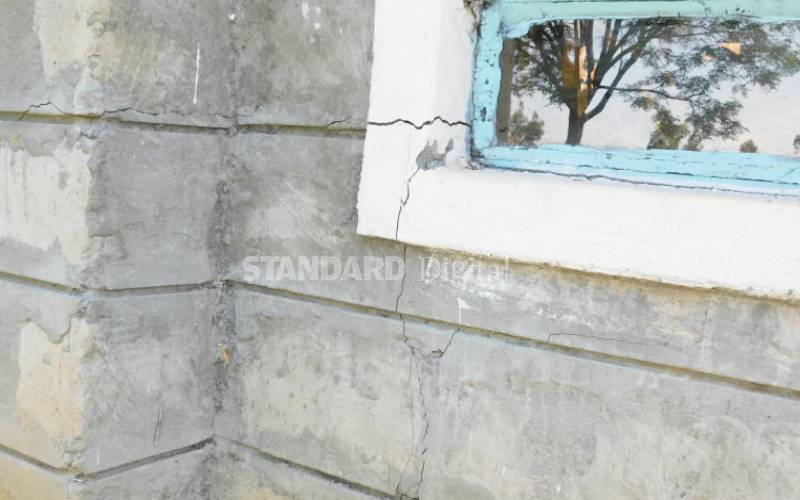 Hundreds of learners could be dancing with fate each day they troop into schools whose infrastructure is wanting.

On Monday, eight pupils of Precious Talent Primary School in Ng’ando, Dagoretti South Constituency, died when a two-storey building housing their classrooms collapsed. At least 69 pupils were injured in the early morning incident.

The Ministry of Education ordered the school, with about 800 pupils, shut for four days to pave way for investigations.

Across the country, tales abound of pupils learning in structures that are a disaster waiting to happen. The toilets in some of the institutions are a hotbed of vermin and disease, with a couple of schools ordered shut by health agencies for operating in unsanitary conditions.

A number of schools in Kakamega County were in the past several months closed down by the Department of Public Health over lack of toilets and classrooms.

The Government ordered the evacuation of 150 pupils from dilapidated classrooms on the verge of collapse at Kaimbaga Primary School in Ol Kalou, Nyandarua County.

This was after the classrooms developed cracks due to what the county government termed shoddy work by the contractor. The classes were built by the Ol Kalou National Government Constituency Development Fund (NG-CDF) two years ago.

He said a team of engineers and quantity surveyors from the county government had been deployed to assess the situation and give a report within three days.

“This is a very serious case and we cannot risk the lives of our children. The classes have developed large cracks and this we suspect might have been caused by shoddy work done by the contractor,” he said.

He said the county had written to all constituency managers to consult the Public Health Department in all the projects they undertook.

The irate parents threatened to close the school if no action was taken within 14 days.

The school, with a population of about 1,300 pupils, has two toilet blocks that are filled up, with waste flowing to the playground.

Rabeccah Mwaura, a parent at the school, said in February one of the ablution blocks caved in.

“We are worried about safety of learners at this school. That is why we need to close it until the issue of toilets is addressed by the Government,” said Mwaura

John Kariuki, another parent, said he bought his children gumboots to enable them to access toilets with ease and prevent them from contracting diseases.

James Chege, the school head teacher, admitted that structures at the institution were in a bad state. He said he had shared the report with the Ministry of Education, but no action had been taken.

“Officials from the ministry know the current state of the school. I even took pictures of classrooms that I shared on their WhatsApp pages but nothing has been done,” said the head teacher.

The Government allocated Sh180,000 capitation money for the school in January, which the teacher said was not enough to construct toilets that required about Sh1.2 million.

Joseph Kimani, a CDF committee member, said they had allocated Sh800,000 for construction of two blocks of toilets for girls and boys.

Other schools in deplorable state in the county include Mumoi and Arash Primary Schools in Subukia.

At Mumoi, several classrooms under a block have cracked walls.

The situation is the same in Arash, where Standard Eight classes and staff room also have cracked walls and floors.

“The relevant authority should repair the classroom as we fear with the current rains, we might have a disaster,” said area ward representative Mary Waiganjo.

In an interview with The Standard last week, Rift Valley Education Director of Education John Ololtuaa admitted that some schools had a problem with infrastructure and sanitation due to high enrollment following introduction of free primary school education and day secondary education.

The Government, he said, allocates money for repair and maintenance per pupil, money that schools are expected to spend on projects, among them, improving infrastructure and sanitation.

Spot checks by The Standard across Nyanza region showed Early Childhood Development Centers (ECD) as the most affected.

“We want the best for our children, but we cannot do much due to a number of challenges,” said Hezbon Ochieng', the school head teacher.

In Nyamira, Gesibei Primary School is among those with poor infrastructure. Classrooms at the centre, which are made from iron sheets, are in deplorable state.

Yesterday, activists and political leaders in the region called on the Government to inspect all buildings that have been constructed in schools in the region.

Elsewhere, at the Isiolo International Airport, one must cross a small opening on the chain link perimeter to access KK Nkengecia Primary School under dusty acacia trees. Not one blade of grass stands in its compound.

With 357 pupils, 11 Teachers Service Commission employees and two Early Childhood Education tutors, the primary school is only a few hundred metres from the airport’s runway and planes land and take off from the facility within the earshot of learners and their tutors.

It has been four years since the Government started constructing the new facility to relocate the school away from the danger zone.

The new facility is located a few hundred metres outside the perimeter, with blue iron sheet roofing and a solar-powered borehole that has made the area a magnet for herders searching for water for their livestock.

It was a Kenya Airports Authority project to relocate the school from the airport land, but minutes of an aborted handover meeting that happened last year show that the school management declined to take over the facility arguing that it was incomplete.

“We saw the original proposal and plan to relocate the school, which stated clearly what was to be built and this included classrooms, library, toilets, a kitchen and a chain link perimeter fence,” said a member of the KK Nkengecia Primary’s board of management (BoM) yesterday.

The promised facilities the BoM claims was not provided in the new school include a Sh4.5 million library, 10 of the 20 cubicle VIP toilets costing Sh9.4 million. The kitchen that was to cost Sh4.5 million was incomplete.

They also claim that the school was to have a chain link fence costing Sh4.5 million and that basic furniture for staff room and pupils would have been provided at Sh2 million.

Isiolo Airport management said only the technical departments could respond to concerns by the KK Nkengecia community about the delayed relocation.

Bill proposing safety rules for buildings in the offing

Already the Bill that was tabled by Majority Leader Aden Duale is undergoing public participation.