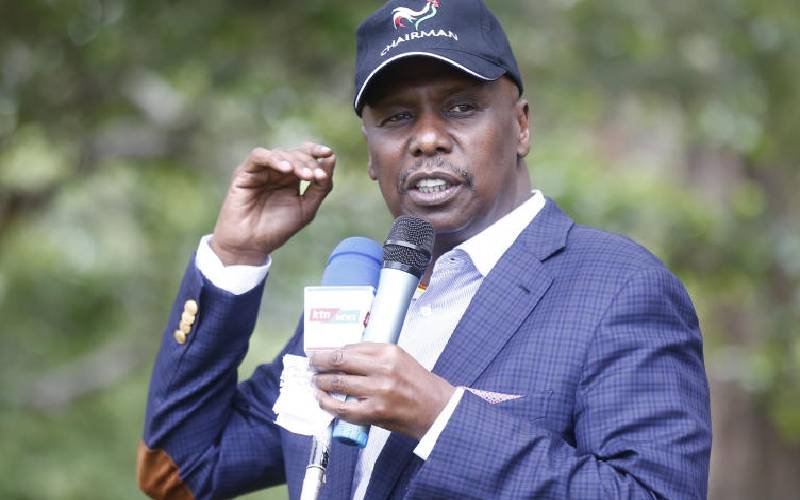 Gideon remarked that the event has remained the largest platform for extra-curricular activities in schools.

“Participants have showcased great performances which ensure continuity and preservation of rich cultures across the country. The judges and organisers have also done a great job in bringing together the largest gathering across the country,” he said.

The senator lauded the festival for bringing together learners from different communities to interact and discover more about different cultures.

While presenting a trophy to Oloolunga High School, which emerged the winner in the Maasai cultural dance and folk songs category, Gideon urged learners to continue bringing out the positive aspects of the society through music.

So far, over 5,000 performances have been showcased with more than 100,000 learners having participated in several competitive categories.

The festival has seen learners across the country competing in several categories, with Zilizopendwa renditions capping the weekend performances.

The learners thrilled the audiences with their well-choreographed performances of yesteryear pop melodies and other songs from across Africa.

They belted out memorable melodies by Samba Mapangala, Yvonne Chakachaka, Madilu System and Ntombi Ndamba as they took the enthralled audiences on a trip down memory lane.

Thika School for the Visually Impaired wowed the audience and judges with their rendition of Vunja Mifupa by famed Congolese artiste Samba Mapangala, which they belted out using traditional instruments.

Makueni Girls, on the other hand, performed Let him Go by Yvonne Chakachaka. They said they chose that particular song to warn young girls to stop longing for relationships with older men and instead concentrate on building their careers.

Buru Buru Girls belted out Marhumbini by South Africa’s Tombi and Ntombi Ndaba while Nanyuki Boys performed Mimi, a song about a woman who divorced her husband and started talking about him behind his back.

In the Zilizopendwa category, Chavakali Boys emerged fourth with their rendition of Sandonga while Pumwani and Machakos high schools tied for third position.

Buru Buru Girls emerged second while Senende Boys were crowned the winners with their rendition of Angela.

To wrap up the weekend, schools also performed Luo and Luhya folk songs.

In the category, Obera Boys defended the trophy they won last year after they were crowned winners. Bungoma High and Karanda Mixed schools came second and third respectively.

However, according to Magoha, the specialisation has been lost.