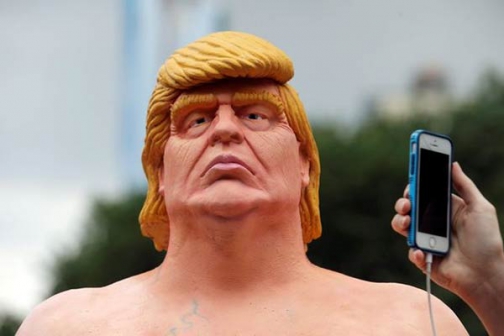 USA: Onlookers were both baffled and horrified when a naked statue of Donald Trump appeared in a park in New York.

The life-size replica of the Republican presidential nominee in nothing but his birthday suit popped up in Union Square Park on Thursday afternoon.

The artwork - entitled "The Emperor Has No Balls" - featured a huge belly, small fingers and missing genitalia, as well as Trump's signature orange tan and unruly blond hair.

The gobsmacking statue raised plenty of eyebrows and left passers-by in fits of giggles.

Ina Cope, 58, said she was not expecting to see the Trump statue when she got off the subway to meet a friend for lunch.

"It was crazy: I was coming off the train, minding my own business, and there it was," she said, laughing.

An artists' collective, called INDECLINE, claimed ownership of the work, saying that the statues were also placed in San Francisco, Los Angeles, Seattle and Cleveland.

It said an artist called Ginger helped create the likeness.

"These fleeting installations represent this fleeting nightmare and in the fall, it is our wish to look back and laugh at Donald Trump's failed and delusional quest to obtain the presidency," INDECLINE said.

By early afternoon, workers from New York's Department of Parks and Recreation had taken down the statue.

Mae Ferguson, a Parks Department spokeswoman, said the statue was removed because the installation of any unapproved structure is illegal in any city park.

The Trump campaign has yet to comment on the statue.

The most ridiculous job interview I went to

When the lady interviewer asked me who was the first man to land on the moon, I realized it was an all different ball game.