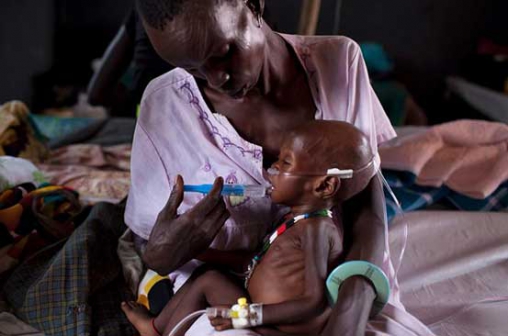 Mzee Shethi Kombe, 75, sits on a log outside his home. At a distance a group of children are scrambling for wild seeds plucked from a local tree known as mworya. It is the only meal of the day. Mzee Kombe tries to calm the children, but in vain.

Cracks on the dry surface in his compound at Ngamani village in Sokoke Location, Ganze Constituency is proof of ravaging famine. It is hot and dry in most parts of Kilifi County, and the story on crop failure is the same. The County Government says that more than 300,000 people are facing starvation due to lack of food. Children are worst hit, it says.

Locals fear losing their livestock, which lack food as well. Mzee Kombe fears that the famine could trigger tribal conflict between farmers and pastoralists along the Kwale/Tana River boarders. County officials say the affected are in dire need of food aid and water supply for the next nine months, when they expect the next harvest.

Mzee Kombe says the next harvest will depend on whether the short rains will be favourable, adding that with his experience in reading weather patterns, the dilemma will stretch past nine months.

“Since the beginning of the month of July, my family and my neighbours have been going without meals for almost two days as we did not harvest anything from our farms,” says Mrs Florence Dena.

She emerges from a nearby shrub with bowls of the wild seeds. Dena says the seeds are also running out. Latest food security rapid assessment done in June indicated that Ganze Sub-county, which has a total population of 137,664 people is worst hit by famine, with 58,277 people currently going without food.

In Chakama in Magarini Sub-county 5,944 people out of the total population of 11,289 also need urgent supply of food and water.

The report compiled by the county government through the Department of Disaster Management, with the support of the World Vision, the Kenya Red Cross, World Food Programme and the National Drought Management Authority in Kilifi portrays a grim picture on the food security situation in the county.

Kilifi Governor Amason Kingi admits that the whole county is faced with starvation owing to poor harvest after the crop failure due to a long dry spell. Mr Kingi accuses the national government of keeping relief food meant to be distributed to the hungry.

“It is shocking to learn that relief food donated by the national government to be distributed to the hunger stricken families has been kept in government stores at Bamba Sub-county and yet the people are continuing to suffer in silence,” says Kingi.

Coast Regional Commissioner Nelson Marwa has however dismissed Kingi, and says that the national government is prepared to deal with famine. Mr Marwa says the government has already mapped out the most affected areas like Ganze, Mariakani, Kaya Fungo in Kilifi County and Kinango in Kwale and parts of Tana River County as some of the famine hot spots.

He says though food security rapid assessment was done in Ganze Sub-county and Chakama Location, food shortage seems to face the entire region due to total food crop failure. Dena says that crops like maize, cow peas, cassava and green grams dried up as a result of poor rains. Dena, a village elder at Ngamani, commends women for resorting to collecting wild fruits and tubers to feed their starving children. “Many of the children have dropped out of school. We fear that if the situation persists then the health of the younger ones will be affected,” says Dena.

The Kilifi County Government says it had set aside Sh16 million to mitigate the ravaging famine in the county an amount Kilifi County Secretary Owen Baya feels was inadequate.

Mr Baya says the funds will be used to purchase food and supply water to the most affected families for about a month, as a short term measure to curb the hunger situation. Livestock farmers in the county are also affected by the drought situation, saying there is no green pasture and water for their animals. “The drought situation does not only affect human beings but even livestock.

As President Uhuru Kenyatta considers the notice of resignation from his most trusted political adviser Nancy Gitau, details have emerged of last minute events that could have pushed her to throw in the towel.