Let us not forget the genesis of BBI 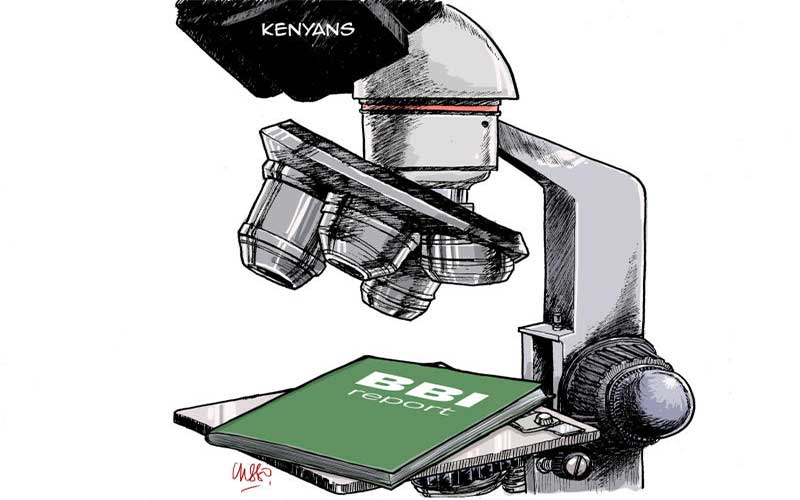 The 2018 handshake between President Uhuru Kenyatta and former Prime Minister Raila Odinga was a consequential event in Kenya’s political history. The country was torn down the middle. Political hardliners and headline grabbing events dominated the news feed following the divisive elections of 2017.

A presidential election results was nullified by the Supreme Court; something never witnessed in Africa. The incumbent, Jubilee party and its supporters across the nation were first stunned, then angered. On the flip side, the opposition coalition upset the status quo by installing Raila Odinga as the people’s president. These two events were unprecedented.

The result was heightened political tension underpinned by peaceful demonstrations that often turned tragic in the hands of the police. The economy was badly wounded; with domestic and international pressure on the leaders increasing by the day.

To their credit, both President Kenyatta and Odinga had shown great restraint and magnanimity – choosing rule of law over the path of chaos and personal aggrandize. Dissatisfied with the presidential elections, Odinga took to the courts instead of the roads. On his part, President Kenyatta accepted the nullification of the first presidential elections and duly submitted himself to the second round of voting.

These actions demonstrated the cognizance and appreciation of the rule of law by the two leaders; something that all Kenyans should embrace. To move beyond personal interests towards bridging the divide, Kenyatta and Odinga would shake hands and set the stage for the Building Bridges Initiative (BBI), billed to usher in a more equitable, cohesive, united and prosperous Kenya.

With the primary objective of uniting Kenyans, the BBI should seek to bring every Kenyan under its fold. To discriminate or label others are antithetical to the aspirations of the initiative and should be avoided by everyone interested in unity and stability of Kenya.

At the same time, opposing BBI simply because it does not pander to one’s personal whims is short sighted and risks derailing the much needed weaving of a new Kenya. So far, there is loud grumbling from a section of the political class against the initiative; yet final BBI recommendations are have not been made public.

On the positive note, we have seen attempts by leaders and senior members of different communities reaching out and having constructive engagements that can hoist peaceable coexistence. The recent visit by leaders from Mt. Kenya region to the lakeside was both symbolic and instructive. Since 1960s perceptions of political feud between the Luo and Kikuyu communities have defined Kenya’s political organizing. Same narratives about political incompatibility have been peddled about a horde of other Kenyan communities.

The visit to Bondo was therefore a statement that there should be no enmity or wedge between Luo and Kikuyu as well as among all Kenyan communities. It was indeed heartening to hear Kakamega County Governor Wycliffe Oparanya extend an invitation to Mt Kenya leaders to make similar visits to the western region.

Such activities are indeed complementary to the aspirations of the BBI and should be encouraged. At the end of the day, we all desire to live in a country where one’s name should not be a basis of fear, discrimination, or labelling.

Kenya has gone through several loops of political antagonism and chaos. Lives have been lost in the process and property destroyed. In the absence of political stability and national unity, Kenya’s shot at industrialisation will remain a mirage; and the Hobbesian culture will endure.

Like the process that led to the promulgation of the 2010 Constitution, the BBI process should be accorded a professional approach; examining its proposals and rationally debating the pros and cons. Eventually, every Kenyan should directly or through elected leaders exercise their stand on the initiative. The process should be conducted in civil way that protects, enhances and preserves the dignity, and unity of the nation.

Ruto tells leaders not to use BBI for intimidation