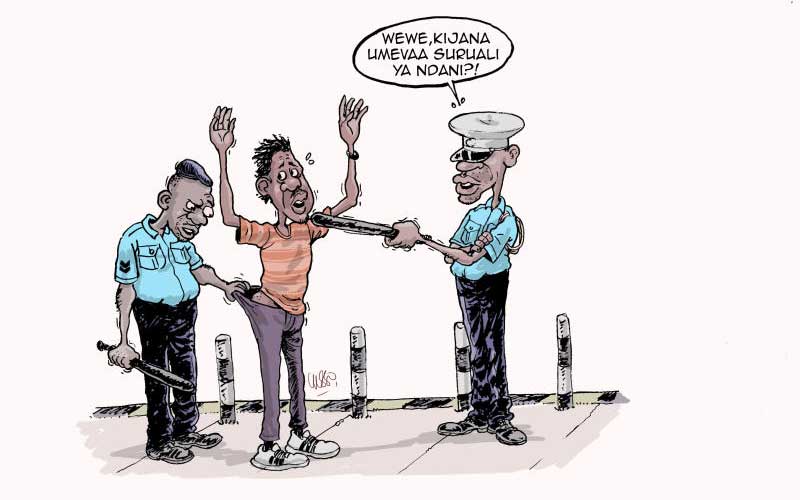 In my boyhood innocence, I swallowed the man’s story; hook, line and sinker. He needed to leap back to his workplace down across the long grass and thicket to pick his tools.

He worked at the old quarry up the road from Eldoret KCC.

I was out and about riding my prized bicycle.

Ten, 15, 20 minutes later, it dawned on me that I had probably been conned. I ran down the dusty road to the quarry gate.

“Kuna mtu amekimbia na baiskeli amepita hapa,” the watchman said pointing to the way out to the backside of the quarry.

In bewilderment, I ran down the road. There was no sight of the man and my bike.

The next day, I went to the police station armed with the receipt of the bicycle. In my small mind, I looked up to the police as dependable crime-busters.

At the reporting desk, the seemingly listless officer listened to my narrative, jotted something in the OB Book and then waved me away when I persistently asked him how soon to expect to hear from them.

All my hopes and belief in the resolution of the matter melted away.

After listening to my story, the officer in charge got two investigation officers to follow me home. In my possession was what I believed to be an investigator’s gem- a CCTV footage. At home, a dusting of the scence of crime a repeat of what might have happened and off they went.

Then followed the calls disguised as follow ups but which really were crass attempts to shake me down. “Unajua hiyo vitu yako ni bei ghali… lazima utuchunge.”

I reported him to his boss and he was taken off the case. I have not heard from the officers about the matter more than two years later.

On advice from the insurance people, we reported the case of the missing spare wheel to the police as a matter of procedure to get an abstract form for claims not that we believed that they would crack the theft - which the officer at the desk frankly admitted, was rampant.

Just as it happened 30 years ago, here was an officer admitting that there was little he and others could do to protect our property and lives.

Never mind the fact that a citizenry inured to see the police as ineffective (at times complicit) in crime loses faith in law and would easily resort to extra judicial means like mob justice.

The grotesqueness of seeing nearly 300 officers swooping in on Kapseret MP Oscar Sudi last week do little to polish the stained image of the police. And to imagine that they still couldn’t find him makes it the joke of the year.

Or the gung-ho style arrest of three senators three weeks ago for what clearly were misdemeanours.

What if that raw show of might – at the risk of trampling on the rights of the innocent- were spared for more deserving cases? And by the way, where are the good officers?

The police delight in the drama of the narrative than in results. Notice how the officers relish to be seen on camera pushing and shoving around even a manacled suspect?

Maintaining security includes unearthing and disrupting the intentions of the would-be criminals. It is just not going for obvious open (never shutting) cases.

Comparatively, an average Kenyan invests a lot of resources, time and emotion minding their own security than government does.

In fact, a lot of the time, police officers jostle for guard duties for VIPs. Notice the panic when security is withdrawn from the big men and women. Because the officers do more than carry a gun and a handbag; they are the errand boys, a pimp for the VIPs and a good source of political gossip during those long, dreary trips in the tax-fuelled SUVs. With it come the tips and per diems and the usual rent-seeking to secure an appointment with the big man.
Considering that nearly a quarter of the officers are guards and those left at the desks can see the changing fortunes of their compatriots; why would anyone waste time investigating the theft of a spare wheel or a stolen bicycle?
To my bemusement, the officers even asked whether tea was ready.

Mr Kipkemboi is an Associate Editor at The Standard. @AndrewKipkemboi