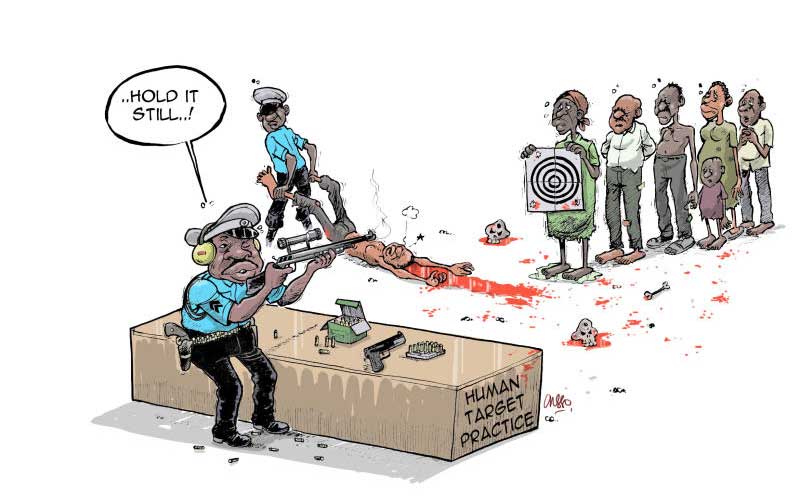 On May 26, the Minneapolis Police Department fired Derek Chauvin, the white American policeman who, alongside three officers, was involved in the killing of George Floyd the previous day.

The death of George Floyd set in motion widespread Black Lives Matter campaigns in the United States and across the world. The swiftness with which Chauvin and his colleagues were brought to justice can be ascribed to the collective voices of protesters whose organisation and persistence was likened to that of the civil rights movements of the first half of the last century.

If police brutality in the United States is racist in foundation, police violence in Kenya is neo-colonial in thrust and unethical in practice.

The way people respond to injustices around them defines the process and expediency of the administration of justice. In Kenya, we have ‘culturalised’ silence so much that conversation on social injustices like police violence, is casual. Extrajudicial executions make headlines today and before sunset tomorrow, they’re forgotten. Remember Evans Njoroge and Carilton Maina?

Shortly after Floyd’s death, the Minneapolis Police Department identified the officers involved by name, hence expediting the administration of justice. Most people argue that the United States is a mature democracy while Kenya is only beginning to run her affairs in a democratic way, the reason the police department is usually slow to identify far-out officers. How democracy addresses the question of police violence may be implicit but, as everyone knows, power has a tendency of attracting impunity.

A few days later, visibly agitated, Interior CS Fred Matiang’i told the public that the ministry had taken action on the officers involved. He did not specify the type of action that was taken. Rumour mills have it that the officers were interdicted. But with their identities unpublished, we may not be able to follow up. Justice, they say, shouldn’t only be done, it should be seen to have been done.

The Kenyan state operates like a secret society. Raised from infancy on a diet of black domination, Kenya is among the countries that have a problem with human rights. In a secret society, wealth buys power, and power almost always comes with immunity from the rule of law. Immunity invariably breeds impunity.

The social texture into which contemporary Kenyans are born and in which they establish for themselves a distinct place in the world hardly recognises the rule of law as applicable to all and sundry.

It has been argued that the original colonial philosophy, the raison d’etre of the police service (previously police force) encourages police violence. Like in most developing countries, police qualification in Kenya is more about physical than ethical soundness.

Kenyan police operate in an environment characterised by haughty public contempt and State negligence. Service is about dedication, without which one can only serve half-heartedly.

To break this visage of disdain, we can start by paying our police officers better. Also, there’s need to improve their work environment. It’s not enough to change the uniform, perhaps we might need to advance police training for efficient service delivery.

Kenyan police officers are among poorly paid public servants in the country. Their welfare is largely overlooked; many live in shanties. This abysmal state breaks the peoplehood that should be inherent in every public servant; which also explains why a majority fail to observe professional ethics in their work.

Up until the enactment of the 2010 Constitution, the police force operated in a colonial fashion; at the beck and call of the government. The institution, deprived of professional independence, was functioning within neo-colonial standards.

The Constitution removed the ‘force’ in the police department and replaced it with ‘service’. But our continuing to hold police officers in disdain has not only ensured that this transformation remains an irony, but also destroyed the human person in the men and women in blue. Franz Fanon wrote in Wretched of the Earth that in a time of helplessness, murderous rampage is the collective unconscious of the colonised.

In his posthumous essay, Congressman John Lewis says: Democracy is not a state, it is an act. To decolonise the police service, we must start by pursuing modern democracy. That is, running our affairs within the high plane of civilisation.