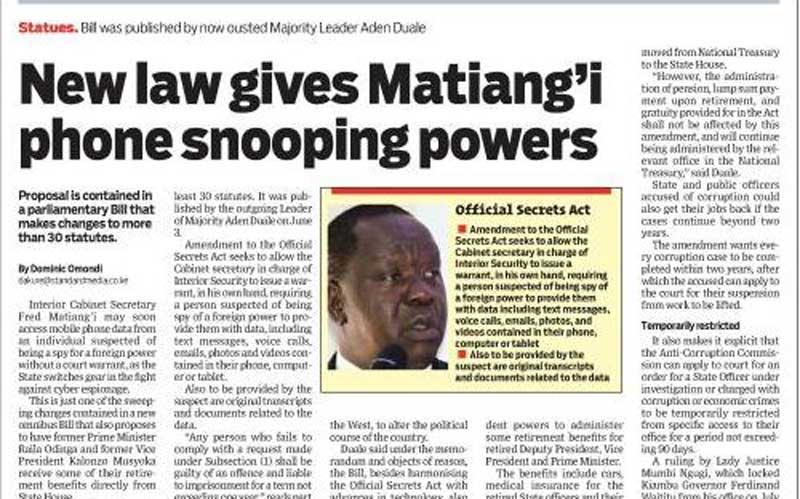 The National Assembly has published the Statute Law (Miscellaneous Amendment) Bill 2020 that seeks to amend several statutes to align them with the constitution and contemporary realities. Examples include changes in technical definitions such as ‘photograph’ to include those generated via electronic means, an expansion from the traditional definition that only recognised film-based photos to enrich the Evidence Act; and, other housekeeping provisions substituting words such as Minister, Attorney General or Commissioner of Police with Cabinet Secretary, Director of Public Prosecutions and Inspector General of Police respectively.

The Bill also delves into substantive issues such as amending sections of the Official Secrets Act. For instance, clause six authorises the Cabinet Secretary in charge of national security to issue a warrant requiring any person who owns or operates a telecommunications device such as a phone or computer to produce the device to the CS or any person named in the warrant. The CS must determine that such intervention is in the ‘public interest’.

The provision is meant to replace the State’s power to issue a warrant requiring a person to produce ‘telegraphic messages’ if the State believes that one is acting on behalf of a foreign agent.

This provision has raised the right to privacy concerns in two ways: First, substituting “telegraphic or telegram’ with ‘telecommunications device’ is problematic because telecommunications devices such as phones, laptops or computers carry a very wide array of data or information, as opposed to telegraphic messages - thereby raising the right to privacy issues and fears of State overreach. The data in one’s phone contains almost all correspondences via text, email and social media; diary; commercial transactions via online shopping and M-Pesa transactions; Internet searches and interests; location data; and stored documents and data.

The problem is exacerbated for people who often rub the government the wrong way, such as journalists who risk exposing their legally and constitutionally protected sources; lawyers and others who have client privilege; human rights defenders; environmental activists; public intellectuals; and political operatives who are not in government.

Given the nature of the data stored in today’s telecommunications devices, any State-sanctioned interference is akin to someone entering your house, ransacking it and going through the most intimate aspects of your personal life. As such, some form of judicial oversight must be included to prevent the abuse of these powers to potentially silence dissenters, activists, opposition operatives and whistle-blowers. Parliament was cognisant of the primacy of the right to privacy when it passed the Prevention of Terrorism Act No 30 of 2012. Section 36 of the Act makes it mandatory for the police to obtain a warrant from the High Court before conducting surveillance on a terror suspect.

Second, the justification of ‘public interest’ under the Bill is not defined, and is overly vague, meaning that the CS has carte blanche to invoke the law. Constitutionally, any limitation to any fundamental human right such as the right to privacy must meet the three-part test set out in international law and Article 24 of the constitution. Limitations must be clearly and concisely provided for by law; pursue a legitimate aim; and, be necessary and proportionate in an open and democratic society.

Privacy is a fundamental human right, which includes the right not to have one’s person, home or property searched, possessions arbitrarily seized, information relating to family or private affairs unnecessarily revealed or privacy of communications exposed.

It underpins human dignity and other key rights such as freedom of association and freedom of speech. One cannot freely express themselves or associate with others if they fear that they are being watched. It has become one of the most important human rights issues of this digital age. State and corporate surveillance and invasion on peoples’ right to privacy threatens democracy. After all, “if all eyes are on you, the whole world is virtually a prison”.

Proposed law could take us back to the dark days

Bill reminds one of the horrors of Nyayo House torture chambers