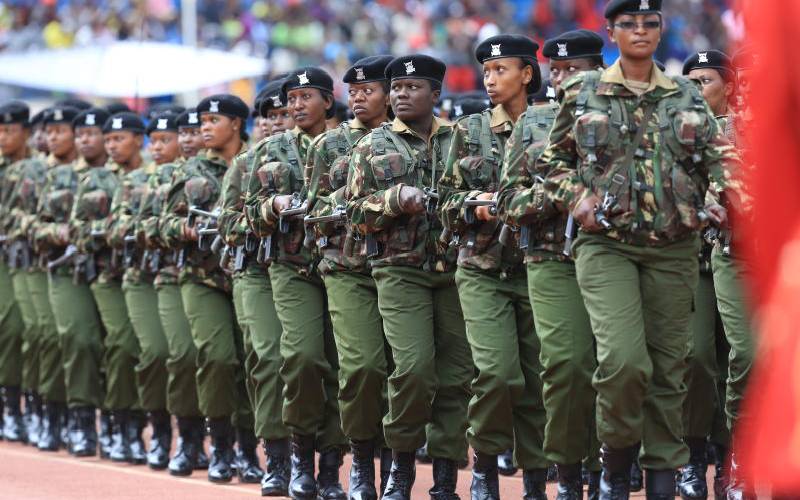 The recently inaugurated all female Special Weapons and Tactics (SWAT) team in Nairobi is the first of its kind in sub-Saharan Africa.

The 48 officers, who graduated from a combat training programme offered by the Administration Police Service in August, are now patrolling the streets on foot and in all-terrain vehicles.

These female officers went through intense martial arts and physical training, gaining skills to rescue hostages and to scale buildings. But the 15-month training was not limited to that.

They also learned unarmed combat, how to create ambushes and conduct operations in the jungle, while some became certified sharpshooters.

Plans to extend this force will see the induction of even more special crime fighting women in Kenya. This will increase our capacity to maintain safety on our streets. We now have a strong force of women capable of eliminating street-level security threats.

This is a major accomplishment. As the first security force of its kind on the continent, these women will serve as role models not just for Kenyan girls, but for girls across Africa.

Special forces was previously a field completely dominated by men, but we are starting to see more women get involved in combat operations all over the world.

Still, though, more work needs to be done. The key to achieving gender equality begins with a country’s leadership. The nation must be led by example. First, official government policy must focus on gender parity.

As a result, social attitudes encouraging gender empowerment will follow suit. This is not only a women’s issue. Our economy and our stability are dependent upon gender equality both at home and across all sectors and professions.

There exists almost infinite untapped potential in girls and women in Kenya. Fostering and encouraging their civil and professional participation can do wonders for our development goals.

When rural girls spend more time helping at home than they do attending school and completing their homework, their education and employment opportunities become limited and our whole nation suffers. It is like having half the team play in a game of football or rugby.

The Government's deliberate commitments to the empowerment and strengthening of girls is clear in several policies informed by the UN Sustainable Development Goals (SDGs).

Females across Africa face disproportionate levels of poverty, disease and illiteracy, even though they are typically responsible for making sure there is food on the table and the family finances are adequately budgeted for.

One of the ways Kenya addresses this is via the Nairobi Call for Action, which outlines 11 actions the Government is following to ensure education and wellbeing of girls in conflict situations.

The points include, advocacy for mainstreaming gender analysis throughout the conflict response cycle, giving teachers the tools and knowledge to provide psychological support, recruiting and training female mediators and using a gender approach to the conflict resolution process.

In addition, the Call for Action provides guidelines for how to reinstate pregnant teenagers or teenage mothers back into school, or provide them with alternative vocational education.

Community-based efforts to eradicate gender-based violence are also under great consideration. Speaking at the Women Deliver 2019 conference in Vancouver in June, President Uhuru Kenyatta noted that some Kenyan girls are still forced to undergo Female Genital Mutilation, a form of gender-based violence that can be traumatic for the victim well into adulthood and at times lasts a lifetime.

This and other practices that put down women through violent means are not uncommon in Kenya. Ending them is a communal effort especially in areas far from the hustle and bustle of urban life.

Kenya is not yet perfect with regards to gender parity but by all measures it is doing a good job. The one-third rule constitutionally aims to ensure that at least one in three government appointments are filled by women.

Representation at the higher level -  be it in government jobs, special forces squads or in business, is key to narrowing gaps in education and employment.

Increasing the participation of women in decision and policy-making at every level, combined with speaking up frequently and publically against inequality reinforces our development trajectory.

50? You are now old enough to go home

There is no point of clinging onto a job while your children are unemployed.