Water challenges still there despite devolution 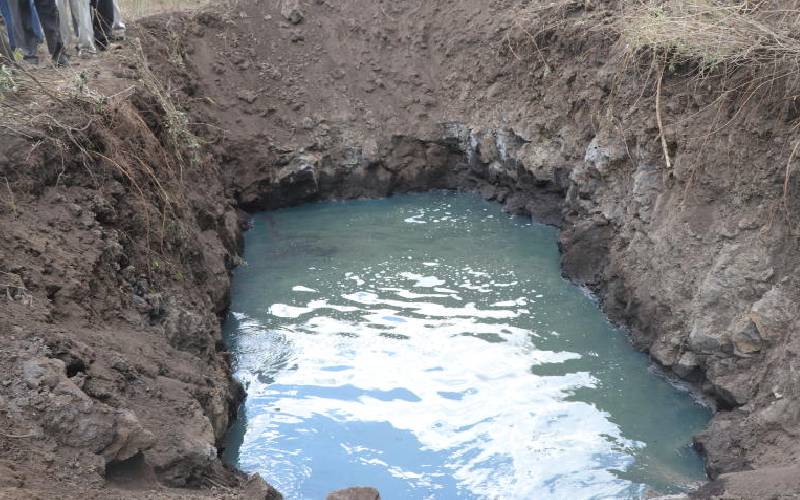 Kenya is one of the countries that did not achieve the Millennium Development Goal (MDG) Goal 6; clean water and sanitation.

Forty one per cent of 46 million Kenyans still rely on water from sources such as ponds, shallow wells and rivers while 59 per cent use unimproved sanitation solutions.

Water challenges are especially prevalent in rural areas and urban slums. Only nine out of 55 public water service providers in Kenya have an assured uninterrupted water supply.

The water and sanitation crisis in the devolved system remains serious. It is aggravated by unprecedented urban population growth, fueled by rural-urban migration due to factors like drought, conflict and rural poverty.

It is projected that Kenya’s urban population will continue to grow and will reach 35 million (59 per cent of the population) by 2027. Without proper water and sanitation facilities, this will be a major challenge for the devolved government.

The proportion of households with access to improved sanitation services increased in 29 counties but reduced in 18 others between 2009 and 2015/16.

Through the 2010 Constitution, many water and sanitation functions were devolved to county governments. Smooth devolution of water services requires the county leadership to drive reform without disrupting services.

However, we have witnessed governors fighting water companies’ boards of directors instead of joining hands with them to provide water.

Access to adequate clean water and improved sanitation is central to achievement of better health and well-being of Kenyans. These services help prevent waterborne diseases and hence mortality rates.

Availability of water is also critical for sustainable economic growth and reduction of poverty as water supports key economic activities in the Big Four agenda and Vision 2030 such as agriculture and manufacturing.

Furthermore, violent conflicts over water such as in Laikipia ranches could reduce if access to quality water is improved across the country.

Access to improved sanitation is a major challenge both in urban and rural areas. In urban areas, the challenge is greater as urban growth outstrips the provision of basic services, sanitation included.

Secondly, urban planning hardly precedes settlement, making it much harder for utilities to provide water and sanitation services. Thirdly, having a toilet, either connected or not to a piped wastewater system is only one part of fecal waste management.

The Constitution makes access to some basic services, including clean water and sanitation, a basic right for all, further reinforcing the need to urgently respond to the prevailing crisis under  devolution. The first step is acknowledging that we have a huge challenge that calls for rethinking of strategies and have water and sanitation management under the national government.

Water scarcity has dogged Kenya for decades. Only a small percentage of the country’s landmass is ideal for agriculture due to lack of water. Urban areas also suffer water scarcity due to lack of adequate funds to put up water pumping stations and piping systems.

The Government educate Kenyans to harvest water using new technologies and to employ modern agricultural practices. During the rainy season, water is channeled into sewers instead of harvesting and recycling it for use.

A conservation technique such as the precision irrigation would help save water by supplying crops with only the right amount of water.

The best thing would be to fully privatise the sub-sector or return it to the national government for better management.

Expenditure in water and sanitation has increased in recent years at the national level and in some counties. However, Kenya is facing a huge resource gap that may negatively affect its ability to achieve universal access to safe water and improved sanitation services by 2030.

Scaling up access to safe water and improved sanitation services is also constrained by high incidence of poverty, fragmented legal and policy frameworks, inadequate data for planning and budgeting and climate change which affects availability of water.

As devolution continues to progress, the need for policy reforms to strengthen national and county government structures and responsibilities arises to minimise confusion due to overlapping obligations and conflicting laws.

Mr Ndirangu is a researcher and PhD student at University of Nairobi. [email protected]

By Mutiso Kiio | 5 months ago