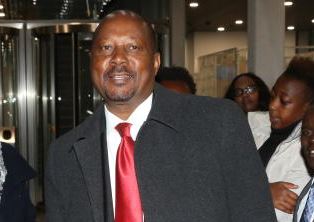 Murang’a Deputy Governor Maina Kamau (pictured) was heckled when he tried to drum up support for the Building Bridges Initiative (BBI) report to coffee farmers.

The farmers could not hear his pleas as he requested time to analyse the report in a meeting attended by Agriculture Cabinet Secretary Peter Munya.

The deputy Governor was invited by Kandara MP Alice Wahome to greet farmers at Gacharage market when CS Munya toured to educate them on the content of the Coffee Bill.

The farmers shouted at the governor saying the day was preserved for coffee issues, and not BBI.

Kamau proceeded to speak until local Deputy County Commissioner Caroly Nzwili asked to sit down to avoid a showdown before the Cabinet Secretary.

“The purpose of the parents is to deliberate on the future of their children,” said Kamau before he was forced to sit down amid heckling by farmers who claimed they were hungry.

Wahome on her part said the residents were not interested in the report as they were yet to be supplied with the document.

“People are hungry and BBI was not on the day's agenda. Let’s hear what brought us in the meeting,” she said.

Munya is concluding his four-day tour of Murang'a today where he will address coffee farmers in Gatanga sub-county at Kiama coffee factory.

Coffee mills to roar as KPCU boss gets nod