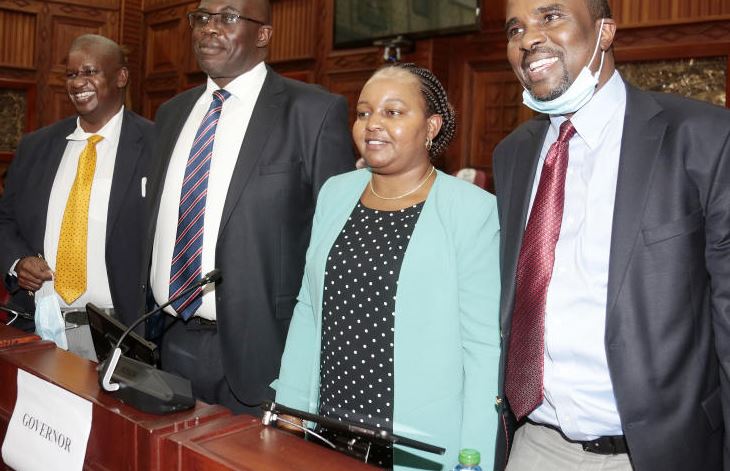 Fresh from a failed impeachment process, MCAs have begun collecting signatures to have Kirinyaga County dissolved even as Governor Anne Waiguru (pictured-third left) accuses them of frustrating her.

Former US President Franklin Roosevelt once said that in politics nothing happens by accident and if it does, you can as well bet it was planned to happen that way.

This quote, although now centuries old, best describes the latest trajectory of politics in Kirinyaga, where an unfolding political storm has thrust the county to national limelight.

At the heart of the storm that has refused to go away for months now is a bitter standoff between Governor Waiguru and the County Assembly members.

Waiguru survived an impeachment process after Senate cleared her of charges leveled against her by the MCAs.

Before the dust could settle, another storm is gathering fast and furious in Kirinyaga.

“We need a serious crisis in this county to convince the governor to invite us to a round table to iron out our differences. As things stand, the governor is treating us (MCAs), the people’s elected representatives, with contempt even on the most critical financial decisions,” says Mutira MCA Kinyua Wangui, who had sponsored Waiguru’s impeachment motion.

Political observers are watching to see how and if Waiguru – a key proponent of President Uhuru Kenyatta and ODM leader Raila Odinga’s Building Bridges Initiative (BBI), will wiggle out of these endless storms.

University of Nairobi lecturer and political analyst Herman Manyora argues that the crisis in Kirinyaga – small as it appears – could seal Waiguru’s political fate before the 2022 polls depending on how she plays her cards.

“Should the MCAs succeed in soiling the governor’s name and discredit her leadership capabilities at the local level, she may lose favour with those wielding the knife cutting the cake at the national level,” says Manyora.

“But should she wiggle out of this crisis, we may have Kirinyaga back on the national negotiation table and possibly even the first female political kingpin from Mt Kenya,” he says.

For residents of Kirinyaga, a piece of the national cake is not a priority.

“Let’s not confuse things here. We don’t care about who is angling for what position in the Kenyatta succession race. What worries us is the chest thumping between our leaders that has pushed us to the brink,” says James Mwangi, a resident.

Undaunted by their failed attempt to impeach Waiguru, MCAs seem determined to frustrate the governor in every corner. They have already begun collecting signatures to have the county dissolved and all elective seats in Kirinyaga subjected to a by-election.

This collection of signatures began days after the assembly rejected Waiguru’s memorandum seeking to amend the county’s budget recommendations for the 2020/2021 financial year.

The vote by 25 of the 34 MCAs shooting down the memorandum legally means that the budget estimates as initially passed by the assembly will automatically take effect after seven days.

Waiguru has responded to queries raised by the Controller of Budget insisting that the executive followed the laid down procedures in preparing the estimates.

She has persistently accused the assembly of deliberately frustrating her administration, citing among other examples, perpetual summoning of her county executives by the MCAs and extortion claims against her county officers.

The crisis has reawakened what for a long time was presumed to be a dormant political volcano since the exit of such firebrand political supremos in Kirinyaga as former Justice Minister Martha Karua.

Karua lit it up further when she took on Kariithi, then the head of the Public Service, in 1992.

With the exit of Njuno, Kariithi and Njiru, the battle ground went quiet, and Karua bestrode Kirinyaga politics like a colossus before leaving the local scene for the national one.

Then Kirinyaga’s politics seemed to cool down, until 2017.

In the 2017 General Election, the Kirinyaga governor’s contest was dubbed as an epic battle of iron ladies when Waiguru and Karua joined the race to unseat former governor Joseph Ndathi. This contest somewhat lived true to its epic stature, as Karua, who emerged second in the polls, contested Waiguru’s win in a protracted legal tussle that went all the way to the Supreme Court.

In the wake of the BBI popularisation rallies that were unceremoniously muted by the Covid-19 pandemic, Waiguru, the sole woman governor from the mountain, strategically placed herself as the leader of the campaigns in the region.

Prior to that, Waiguru forged an alliance with her former bitter critic, Orange Democratic Movement (ODM) Party Leader Raila – who played a major role at ejecting her from the Devolution ministry.

Waiguru joined Raila and other opposition leaders in a vigorous campaign against Jubilee’s candidate in the Kibra by-election, Macdonald Mariga.

ODM’s Imran Okoth won the mini-poll, sparking fresh debate on whether the campaign team was a likely preamble to fresh political re-alignments ahead of the 2022 polls, with Waiguru in a line-up of an expanded executive structure of government that would factor in a prime minister and two deputies.

A majority of Kirinyaga MCAs, however, question Waiguru’s leadership style and still believe that Senate ought to have sent her packing.

“It sounds ridiculous for people to drag the BBI matter to integrity and leadership queries raised. It is even more ridiculous that the Senate appeared to be swayed by external forces rather than the bulk of evidence we tabled,” says Wangui.

Kirinyaga is also home to the powerful Interior Principal Secretary Karanja Kibicho, who was recently on the firing line of key allies of Deputy President William Ruto who questioned the PS’ role in what they viewed as State-engineered machinations to block Ruto’s 2022 State House bid.

Kibicho was also dragged into the Kirinyaga impeachment saga, which came a few months after his tussle with Waiguru over a multi-billion Kenya Medical Research Institute project in Kirinyaga.

Interestingly, the prevailing standoff between the governor and the MCAs caught Karua’s eye. The Narc Kenya leader praised the MCAs for standing for Kirinyaga people, an indirect salvo at her political nemesis in the region.

“I’m asking the president, what is your message to the people of Kirinyaga? You seem to have thrown us under the bus. Your party did not look into the allegations, but settled on sideshows,” said Karua after collapse of Waiguru’s impeachment.

After surmounting the impeachment, Waiguru had sought the mediation route, picking a seven-member team, but who the MCAs rejected.

To succeed in their quest to have Kirinyaga County Government dissolved, the Kirinyaga MCAs need to collect at least 34,983 signatures in support of the petition – this being 10 per cent of the 349,836 votes across the four constituencies in the county.

“We are fed up and so are the people we represent. It gets to the point when you say enough is enough,” says Kirinyaga County Assembly Majority Leader Kamau Murango.

Since her days at Treasury as head of the Integrated Financial Management System, Waiguru has enjoyed close working relationship with Uhuru.

But the president has steered clear of the raging political storm in Kirinyaga that is building by the hour.

Sakaja in trouble for breaking curfew rules he helped craft

Police hunt for Senate’s chair of Covid-19 committee after finding him in a bar at 1:10am.

By George Njunge | 5 days ago