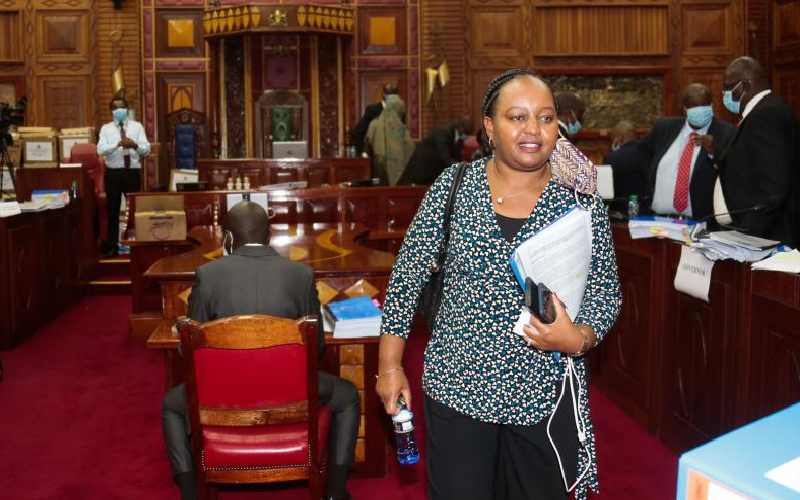 Kirinyaga Governor Anne Waiguru (pictured) yesterday fought off claims that she presided over the awarding of flawed multi-million shilling tenders.

Instead, the governor accused members of the county assembly behind her impeachment of engaging in a witch hunt.

Waiguru said her ouster was an abuse of the impeachment process. "It is a waste of time and resources to address minor administrative issues that would easily have been clarified by a routine inquiry."

The governor dismissed the charges against her, which include gross violation of the Constitution, undermining the authority of the county assembly, violations under written law, and abuse of office and gross misconduct.

"I must say that the grounds that formed the basis of my impeachment, and which this committee is now asked to superintend, are an affront to the very serious process that the Constitution and the law have prescribed for the removal of a governor from office,” she stated, while making her opening remarks.

“If you find that the allegations are malicious, unfounded and were calculated for the mischievous purpose of harassing the governor, you must declare these processes to amount to abuse of office by the MCAs."

One of the grounds cited for her removal is the opening of a coffee shop in the US to market the county’s produce. MCAs said millions of shillings were spent on the initiative, but it turned out to be a hoax.

During the Sixth Annual Devolution Conference in Kirinyaga, Waiguru announced plans to start selling coffee directly to the American market after she struck a deal with a New York-based firm that would directly source the commodity from farmers and fly out up to four tonnes every week.

The direct sales were expected to fetch an average of Sh120 per kilogramme in New York where the coffee was to be exposed to international consumers.

At the start of a two-day grilling by the Senate to substantiate the MCAs allegations, county assembly lawyer Ndegwa Njiru faulted the governor for hiring her cronies to non-existent positions in disregard of guidelines by the defunct Transitional Authority.

The Senate select committee chaired by Kakamega Senator Cleophas Malala heard of two companies, Velocity and Volecity, and three staff who did the governor's bidding.

“These companies were registered in 2017 and included in open tender in 2018. In 2017, they allegedly had audited accounts for three years and experience of five years and, therefore, awarded tenders worth millions of shillings under the watch of Waiguru’s staff,” said Mr Njiru.

Njiru told the committee that the governor used intimidation to influence their appointments through the County Public Service Board.

“Wayne even holds an office that is not created or prescribed by any manual, while Pauline is unqualified for the director’s job going by the TA guidelines. Yet the governor pushed for their employment. They also sit on the executive committee.

“It is not by default that Mr Mugo favoured Edwin Ndathi (his brother) to win tenders, yet there are clear provisions to declare conflict of interest,” said Njiru.

He said that while there was no paper trail linking the governor as a signatory, she would coerce and intimidate staff to sign documents on her behalf, thereby undermining the county assembly's oversight role.

The lawyer also faulted the governor over the procurement of a Sh14 million official vehicle but Waiguru brushed off any claims of impropriety.

“The purchase was not from a dealer but from the manufacturers of the vehicle, Toyota Kenya, that supplies government vehicles under a framework contract,” she said.

Njiru said the MCAs had not impeached the governor in bad faith, but as last resort to protect the public purse.

“Every single coin lost belongs to the Republic of Kenya. The governor is in breach of her sovereign duty to the people of Kirinyaga."

The governor wondered why the MCAs would allege she had not gone on trips where the leader of majority, the chief accuser, was present and had been photographed with her in the US and Italy.

"Why does the business of Kirinyaga County have to stop as the Senate is called upon to interrogate travel imprests that haven't even been reviewed by the assembly?

Gachoki claimed that because of work overload, some healthcare workers, who were working without leave, suffered miscarriages.