Base Titanium commences drilling in search of new mineral deposits 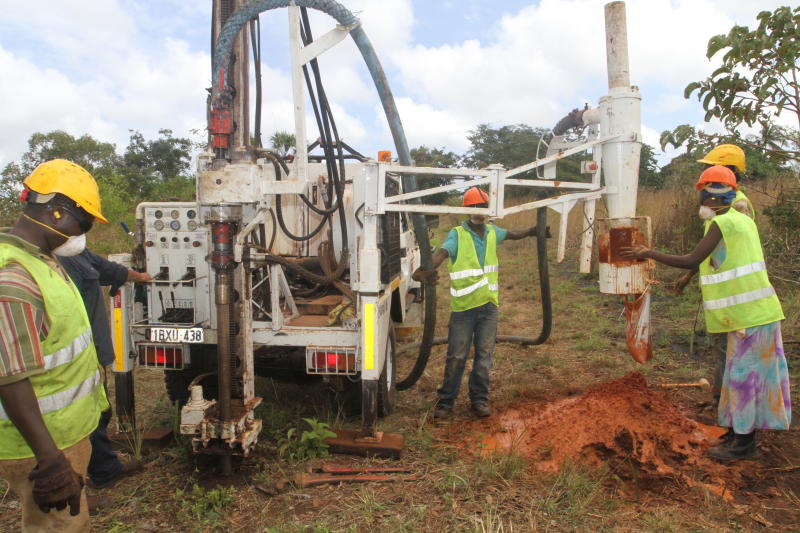 Kenya's largest mining venture, Base Titanium has been undertaking a number of exploration programmes in an effort to discover additional near site mineral sands deposits with potent to extend the Kwale mine life.

It is expected that in four years’ time, the firm will be winding up its activities after current mineral reserves are completely depleted.

Th latest of these programmes commenced on the 1st April 2019 in Vanga Ward, Lunga Lunga Sub-County following extensive consultations between Base, the County Government, local communities and area leaders to seek land access and address any initial concerns.

This is the first time Base has undertaken exploration in Vanga since its prospecting license PL/2015/0042 was issued by the Cabinet Secretary of Petroleum and Mining in December 2018.

As the first globally significant, large-scale mining project in Kenya, Base has opened up a new sector of the economy, propelling minerals into the top four export earners in the Country.

According to data seen by The Standard, 2018 saw the Kwale Mine generating US$200 million in exports, of which US$107 million were to China which represents the bulk of Kenya’s exports.

The Project adds an estimated US$108 million to Kenya’s GDP annually and generates a total of US$186 million in economic output per year. Over the life of the mine the contribution to GDP will be close to US$1 billion.

“If successful, the mine will remain productive for a longer period as a development partner in Kwale County, thus allowing benefits to continue flowing to the National Government, the County and local communities by providing employment, bringing royalty and taxation revenues, contributing to community development programmes and stimulating wider economic activity,” Simon Wall, Base Titanium General Manager, External Affairs said.

Wall said at stake is the livelihood of over 1,000 people who are currently employed by Base Titanium and its contractors and the fate of community programmes including scholarship and livelihood agricultural and health programmes that have significantly helped the people of Kwale.

So far the company is supporting close to 2000 students in secondary school, tertiary and at university level.

Base Titanium has been seeking to identify additional mineral deposits that may lie in proximity to the existing operation following a 2015 airborne geophysical and radiometric survey that covered the south coast region from Likoni in Mombasa to Lunga Lunga.

The mining firms plans to drill in the localities of Kiwegu, Jego in Vanga ward before moving to Pongwe Kikoneni ward, then Dargube, Michingirini, Fahamuni among other areas in South East of Kwale towards the Tanzanian border.

Base Titanium Community Relations Manager, Mr Pius Kassim said the company was working on the ground with six local committees chosen by the communities which were overseeing the exploration exercise.

“Given the excellent support during the consultation period from national and county administration representatives, very little resistance has been felt against exploration. On the whole, by sharing information and clearly demonstrating the relatively low impact that exploration has the few concerns of residents have been addressed,” said Mr.Kassim.

“Most of the backlash had emanated from mis-information on the process of exploration but the issue was ironed out during the community engagement sessions and most landowners where the drilling points had been earmarked given consent,” said Mr. Kassim.

The exploration programme has also come with benefits of its own with the local community having gained employment in the drill sites.

“The exploration programme has also created 20-25 employment opportunities for local residents as well a number of business opportunities to supply goods and services. This ensures that benefits and opportunities are generated and felt.” Said Mr Kassim.

Results from the exploration will not be known for some time, as a thorough assessment and analysis of the samples must first be undertaken. Follow this, Base will re-engage with local residents to communicate the findings.