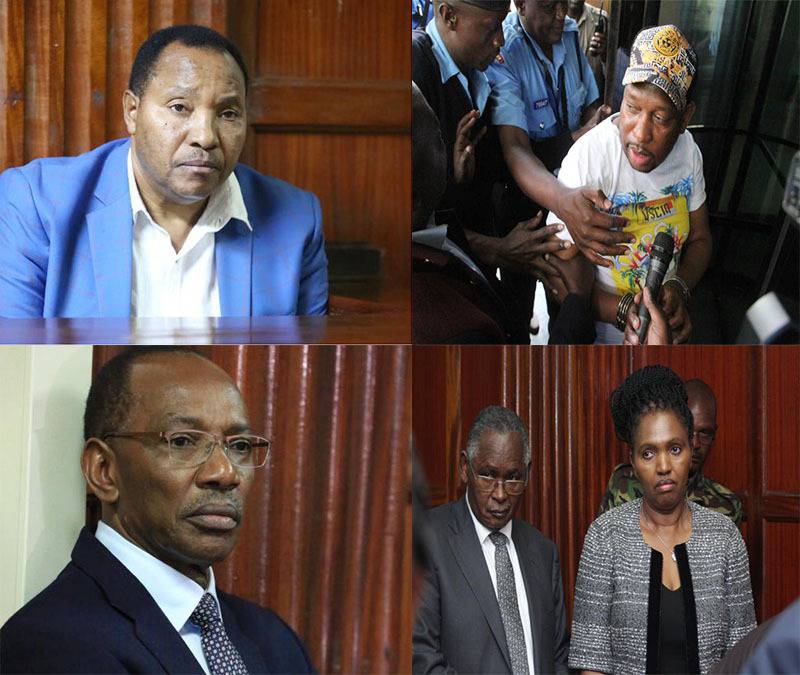 Nairobi Governor Mike Sonko was arrested on December 6 over his alleged involvement in corruption at City Hall.

Sonko was arrested in Voi while on his way to Mombasa a few hours after Director of Public Prosecutions Noordin Haji announced that he would be arrested on suspicion of high-level corruption.

After an investigation that the DPP said was made challenging by obstruction, intimidation and constant threats to the investigators, Haji said the Ethics and Anti-Corruption Commission (EACC) had acquired evidence to prosecute Sonko and eight other county employees for the theft of Sh357 million.

“Investigations into these crimes have been challenging because of the repeated attempts by the accused to obstruct the course of the investigation by deploying intimidation tactics in addition to using goons to threaten law enforcement officials,” the DPP said.

During a press conference in Nairobi, DPP Noordin Haji announced that the governor would be questioned over the loss of Sh357 million of county funds.

He secured his release after paying a cash bail of Sh15 million.

Sonko is expected to appear in court for the mention of his graft case on January 15, 2020.

Court barred Sonko from accessing his office and commenting on the case on social media as were the directorates of public prosecutions and criminal investigations and the Ethics and Anti-Corruption Commission.

The suspects denied six counts of Sh588 million irregular procurement of a tender awarded to a company in the county.

The couple is facing three charges of conflict of interest and two of dealing with suspect property.

The first conflict of interest charge is in respect to Sh25 million allegedly paid to firms associated with the governor, while the first charge on dealing with suspect property involves Sh18.4 million spent in the acquisition of Saika Two Estate Developers Ltd.

He was granted a Sh15 million cash bail in a case involving a Sh588m tender scam.

The court barred him from accessing his office until the case is heard and determined.

He fought back by writing to the Senate protesting that his impeachment was irregular.

The Senate Speaker Kenneth Lusaka acknowledged the receipt of the letter from the Governor but said he will not act on it since he had not been notified of the impeachment.

“I have not yet received any notification from the Kiambu County Assembly Speaker regarding the impeachment of Governor Waititu.  My office will act accordingly once we receive the communication and documents in evidence of the House proceedings on December 19, 2019,” Lusaka said.

Waititu had informed the Senate that he assigned his lawyer Ndengwa Njiru in the company of another advocate, Antony Kago, who sat through the impeachment debate and whose attendance was captured by the Hansard.

Before being marked a wanted man, Kariuki maintained a low profile despite his immense wealth and only few Kenyans would be able to pick him out in a crowd.

Even in his rural village in Nyeri where he was born and brought up, a few people can match his face to the name. Only his age mates in Ndima village knew him. Anyone younger knew little or nothing about the wanted business mogul.

DPP Haji was now on a mission to arrest him alongside eight others on claims of tax evasion amounting to more than Sh41 billion by Africa Spirits and Wow Beverages in Thika.

Kariuki’s company is accused of manufacturing substandard alcohol but he has always described himself in various interviews as a “first-generation serial entrepreneur.”

The business mogul presented himself in court on August 19, 2019, following the summons a day after he jetted back into the country, according to his lawyer.

Court allowed the tycoon to have back his two passports to enable him to travel abroad.

The owners of alcohol giant Keroche Industries Ltd Tabitha Karanja and her husband Joseph Karanja were arrested in Naivasha on August 22 after the brewer was accused of Sh14 billion tax evasion.

They were held after the Director of Public Prosecutions Noordin Haji ordered their arrest.

The couple was released on cash bail after denying 10 counts relating to tax fraud.

A Nairobi court ordered Keroche CEO Tabitha Karanja to pay Sh10 million cash bail and her husband Joseph, who is the chairman of the beer company, to pay Sh2 million.

In his ruling, Milimani Chief Magistrate Francis Andayi granted Mr Karanja different bond terms because he is a senior citizen.

During the case mention on September 2, the prosecution was given two weeks to supply witness statements and other exhibits its officers will be relying upon in the trial of Keroche Breweries CEO Tabitha Karanja and her husband James Karanja Muigai.

The trial of Keroche Breweries Limited owners was set from January 26 to 31 next year.

The dates were agreed upon during the pretrial conference before Chief Magistrate Martha Mutuku after the defence through Kioko Kilukumi confirmed they had been supplied with all witness statements and documentary exhibits.

By Nathan Ochunge | 41 minutes ago

By David Njaaga | 56 minutes ago

Sakaja: I will be in the ballot