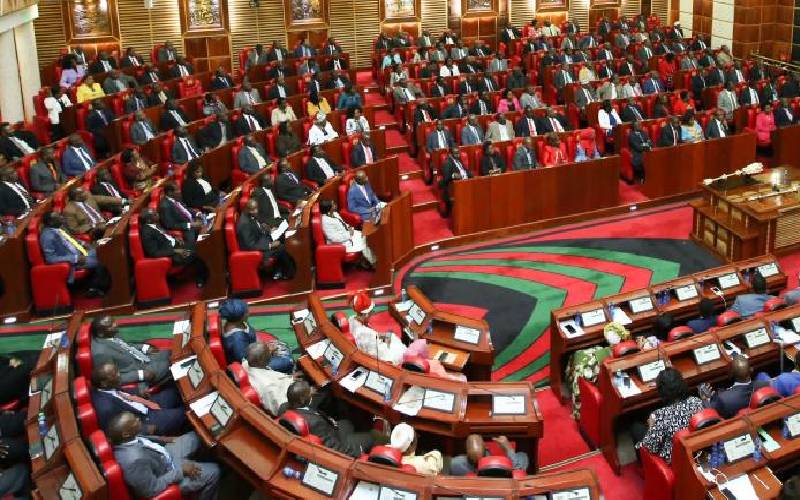 Members of the National Assembly have threatened to paralyse House proceedings over the delayed release of the National Government Constituency Development Fund (NG-CDF) billions.

The lawmakers vowed to shoot down all motions listed for tomorrow’s special sitting if the National Treasury fails to disburse the funds by this evening.

Members of the Budget and Appropriation Committee spent the better part of yesterday trying to hammer out a deal with National Treasury Cabinet Secretary Ukur Yatani by pushing for a Sh13.5 billion allocation in the supplementary budget to clear NG-CDF arrears for the last financial year.

Despite all MPs being in agreement on their course of action, it also emerged that allies of Deputy President William Ruto were plotting to take advantage of the stalemate to frustrate government agenda in the House.

Speaker Justin Muturi has convened the special sitting to take a vote on the annual Division of Revenue Bill, 2021, after it was deferred twice last Thursday when MPs gave both the afternoon and evening sittings a wide berth.

Instead, they staged a protest chanting “No CDF, no sittings".

The MPs are set to consider the approval of the first supplementary estimates for the financial year 2020/2021 as well as to debate the controversial National Aviation Management Bill set for second reading that seeks to nationalise the troubled national carrier, Kenya Airways (KQ).

Sources in the Budget and Appropriation Committee yesterday told The Standard that the committee and the National Treasury had covered new grounds in resolving the stalemate.

The Treasury is said to have given in to some of the demands by the MPs in a submission to the team chaired by Kieni MP Kanini Kega, who also doubles as the Budget and Appropriations Committee chairman.

“We have largely agreed with the Treasury that arrears for the last financial year be cleared in the supplementary budget,” said Samuel Atandi (Alego Usonga), a member of the committee.

It has emerged that the 290 constituencies have received an average of Sh20 million out of the Sh137 million for this financial year.

“When we ask for the NG-CDF, we do not ask for a favour from Ukur Yatani or anybody else; not even from the President of the Republic of Kenya. The NG-CDF Act is a law that was made by this House. The money does not go into members’ pockets; it goes to development activities in the constituencies of the people we represent. That is why you see the emotions are quite high,” said Ichung'wa.

He said members were concerned on why the Treasury was hell-bent on pushing them to approve allocation for counties, but was not keen on disbursing CDF money.

Minority Whip Junet Mohamed said it was the first time the Treasury had failed to release the funds three months to the end of the financial year.

“I do not know why the Cabinet Secretary of the National Treasury cannot explain to the NG-CDF Committee, the Budget and Appropriations Committee and even to this House what is causing this delay,” he said.

Ugunja MP Opiyo Wandayi said the Treasury was to blame for the stalemate in the House, saying a vote on the Bill was tied to Treasury releasing the funds.

“The matter of CDF is of concern to the MPs. It is a very emotive issue that has to be handled well otherwise the Executive will be embarrassed," he said.

Nyando MP Jared Okello said development projects have stalled due to the delayed disbursement of the funds.

"We have contractors who are demanding payments. We cannot pay for children who depend on CDF for school fees. We see Executive programmes running as usual yet this important aspect is lagging behind,” said Okello

The MPs left last Thursday and are expected back on Saturday.

By Nathan Ochunge | 26 minutes ago

By Kennedy Gachuhi | 26 minutes ago

By David Njaaga | 41 minutes ago

Sakaja: I will be in the ballot

By Kennedy Gachuhi and Bradley Sikolia | 1 hour ago

Prime suspect, five others in string of murders in Nakuru arrested
Feedback