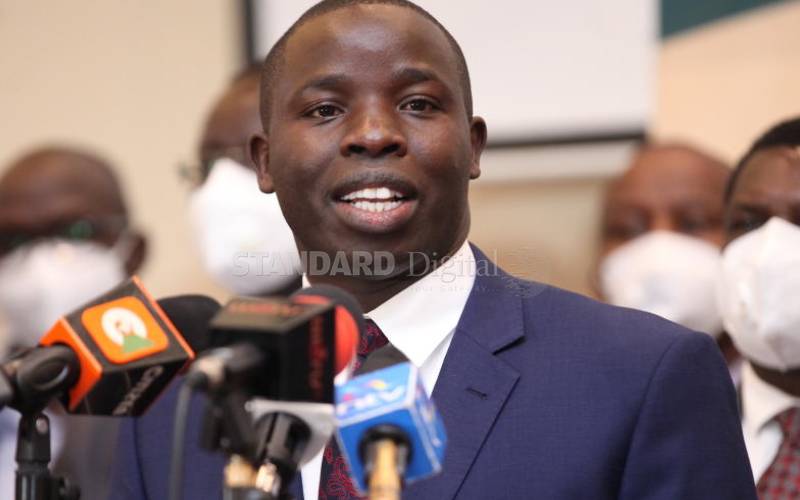 Auditor General Nancy Gathungu pointed out a litany of audit queries in Governor Stephen Sang’s (pictured) administration. From questionable payments to ward reps, to delay in implementation of county projects, and to accumulation of pending bills, a recent audit report raises red flags.

According to Gathungu, the Sh319 million spent on domestic travel exceeded the budget for the vote by Sh96 million - an equivalent of 43 per cent of the item, which was budgeted at Sh223 million.

“No plausible explanation was provided by management for this irregularity that resulted in diversion of funds budgeted to provide goods and services to the residents of Nandi County,” the audit report says.

The county is also accused of irregularly paying Sh2.8 million as travelling allowances to 41 MCAs who attended a workshop in Mombasa.

“Payment of allowances from the funds allocated to the County Executive was irregular since the county assembly had its own budget for travel and subsistence,” the Auditor General noted.

On delay of implementation of development projects, the county had delivered on only one out of over 400 worth Sh1.39 billion in the 2018-2019 financial year.

The report indicates that the one project that had been concluded at the time of the review in October 2019 had not been put to use. “One hundred and ten were ongoing whereas works on the remainder 310 projects were yet to commence,” the audit report says.

“Failure to implement the projects hampered realisation of the County Integrated Development Plan, the second medium-term plan as well as Kenya Vision 2030.”

Gathungu also raised the red flag over a huge balance of unpaid bills amounting to Sh1.6 billion. She questioned the existence of 725 county staffers who were not in the Integrated Personnel and Payroll database, and who were only on a manual payroll at the time of review.

According to the Auditor General, the 725 workers, drawn from various departments, gobbled Sh261 million during the period as salaries.

It emerged during the audit that Nandi County had not established an emergency fund against the Financial Management Act of 2012, which states that the Executive may establish an emergency fund that should consist of monies appropriated by the County Assembly.

“In the absence of the Emergency Fund, the County Executive may not be adequately prepared to tackle emergencies that may occur in the county,” the Auditor General said.

Nduhiu, 42, dismisses theories circulating on social media over the cause of fire, says police are investigating the matter

In the latest incident, fire broke out from a shop in the wee hours and spread fast, leaving a trail of destruction and misery.

By Obare Osinde | 57 minutes ago

By Harold Ayodo | 2 hours ago