So much money in banks: Why CBK can't just let it rain 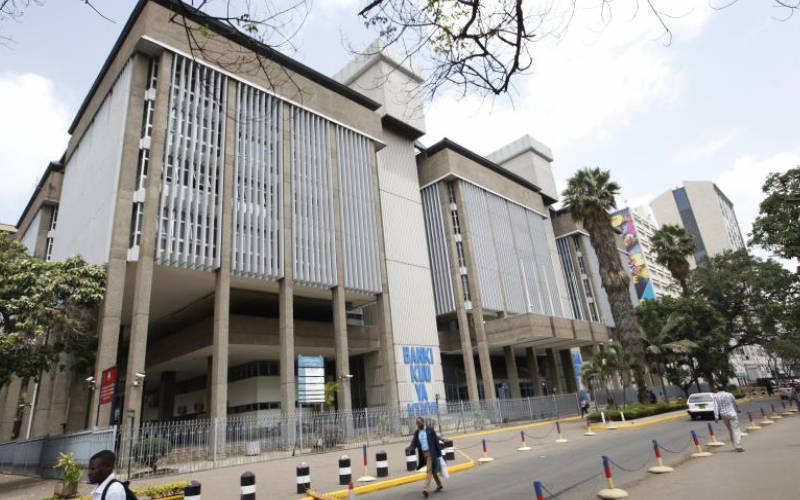 When your typical Mama Mboga in Nairobi leaves her home for the market in the wee hours, she has just one wish in her mind.

It is one that is shared by nearly every Kenyan - that by the time she slips back into her bed, the shilling she starts with will multiply or will somehow buy her more goods and services.

Her wish is to make money, more Kenya shillings. She will need the local currency to buy a loaf of bread, milk, and kerosene to fix breakfast before she leaves. She will use the same cash to pay her matatu fare; to pay for her stock; pay for medication should one of her children fall sick; or settle her electricity bills.

And there is good news if reports swirling around are anything to go with. There is loads of idle cash. Probably if the channels are clear enough to speed up the flow of money, then Mama Mboga and a host of other ordinary Kenyans should also be swimming in cash.

In the first five months of the year, the ratio that is used to show the bank’s cashflow was at its highest since the Central Bank of Kenya (CBK) started making the data public.

Between December 2018 and March 2019, the stock of money increased by Sh77 billion to reach Sh3.4 trillion.

Central Bank of Kenya Governor Patrick Njoroge said the increase was a result of both national and county governments paying part of their debt, estimated at Sh24 billion.

According to CBK, the payment of pending bills offset tax remittances by businesses as the financial year (FY) came to a close, ensuring that the money market remained liquid.

These payments included pending bills of at least Sh10 billion and tax refunds of Sh14.2 billion which were paid out before the end of FY 2018/19 in June.

Deepak Dave, a financial analyst, says the billions that banks are sitting on arise from the fact that lenders are not extending loans to small and medium enterprises (SMEs) due to the interest cap law, which prohibits them from charging interest rate beyond a certain threshold.

But there is also bad news for Mama Mboga. CBK, fearing that more money might result in more problems, could be mopping up this excess liquidity - though some analysts have insisted there is no evidence of tightening.

An economist, who declined to be on the record, said that the main tool that signals CBK’s intention to tighten the supply of money is the Central Bank Rate (CBR) - the rate at which the apex bank lends money to commercial banks.

The latter would then add their own interest rate when giving loans to consumers. But the CBR rate has been maintained at nine per cent for nearly a year.

However, some analysts believe that CBK, whose boss has been pushing for banks to loosen their purse strings so that more money can percolate downstream to Mama Mboga and other small traders, is actually stemming the flow of this huge cash.

While such an action means less cash flow from banks’ coffers into the wallets of businesses and individuals, CBK believes it is doing all this for their good and that of the entire economy.

Genghis Capital analyst Churchill Ogutu says the mopping up of excess liquidity has been apparent in the average interbank yield (the rate at which banks lend to each other). He says this rate has edged upwards from the levels that were at the beginning of July.

Moreover, said Mr Ogutu, the returns on Government’s short-term debt - Treasury Bills (T-Bill) - last week started declining at the lower tenors, especially 91-day and 182-day T-Bills, an indication that the demand for those securities had been depressed as cash in the economy reduces.

More money in circulation could mean fewer consumer goods and services for Mama Mboga as traders who cannot quickly increase the supply of consumer products in line with increased money simply hike their prices.

This situation, where more money chases few goods (demand-pull inflation) could be counterproductive to the economy. Central banks globally are careful not to over-shoot the supply of money. The economist said while food and fuel inflation has gone up, demand-pull inflation which is mostly informed by non-food, non-fuel products has not.

For huge chunks of production inputs, including wheat and fuel that goes into the production of bread that Mama Mboga buys, over 80 per cent are paid for in foreign currency. And most likely, in US dollar currency, not the local currency.

It is worth noting that unless manufacturers get those inputs locally or the country’s productivity goes up, they will need more dollars than the local currency to replenish their stock.

Official figures show that for every 10 kilograms of wheat and wheat products consumed in Kenya, nine is bought from the global market. With studies showing that six out of every 10 of all known CBK foreign exchange reserves being in dollars, and close to a half of the world’s trade being done using the greenback, Kenya will continue to seek more of US’ legal tender.

Increasingly, a lot of Kenya’s food including rice, sugar, sorghum, maize, and tomatoes, are being imported, a situation that has seen the country raid its reserves of foreign currencies to settle its expensive import bill that rose to Sh1.76 trillion in 2018.

These foods will certainly take up a huge chunk of Mama Mboga’s income. Overall, a fifth of a typical Kenyan’s shopping basket of food and drinks is most likely to be imported.

The fertiliser used to grow the sukuma wiki, maize, tomatoes and onions that Mama Mboga buys from the market is most likely imported. The tractor used to till the land for growing the crops and the truck that brought produce to the market, are powered using imported diesel.

For every Kenyan, food and fuel together gobbles up at least Sh500 for every Sh1,000 that they spend. A wide range of products they might buy in the course of the day, from drugs given by public hospitals, toothpicks, and secondhand clothes, are bought from overseas and paid for in foreign currency.

If they ever get treated by Cuban doctors, the Kenyan Shilling will have to be converted into dollars for the doctors to be paid. And Kenya still remains a net importer. It buys from the global market more than it sells.

Tourists and foreign investors also pump into the economy critical forex reserves. But Kenya’s export earnings have largely been stagnant.

Because most of what Kenyans consume is produced outside the country, when people find themselves with a lot of money, they jam banking halls and forex bureaus itching to get hold of dollars so they can buy designer shoes, cars, tablets, carpets, toys, medical equipment, toothpicks… the list is endless.

Since February 28 when 100.08 units of the local currency were enough to fetch a dollar, the Shilling has depreciated to a low of 104.2 by end of trading on July 31, before it gained some ground to trade at 103.2 on August 2. This has had an effect on the cost of living for Mama Mboga. Assuming that traders bought oil at the prevailing exchange rates, Kenya would have saved Sh263 per every barrel (approximately 159 litres) of oil bought from the global market if the Shilling had not depreciated.

The additional cost has reflected the cost of a lot of things consumed by Mama Mboga and every other Kenyan.Depreciation in the exchange rate has also stretched the country’s fiscal policy, with interest and debt payments gobbling up much of the tax revenues.

When Kenya went into the international capital market for the first time in late 2014, it raised a five-year Eurobond of $750 million. The exchange rate then was in the region of Sh90.5 which means in local currency the dollar-denominated sovereign debt was worth Sh67.8 billion.

However, when the country paid the debt in May this year, the debt had ballooned by close to Sh10 billion as the exchange rate depreciated to an average of 103. The Eurobond repayment was estimated at Sh77.2 billion.

This leaves little for other expenditure items such as the building of schools, buying drugs for public hospitals or even hiring teachers, doctors, and police.

The net effect is that Mama Mboga does not get to enjoy quality public services.

The cost of food, fuel and transport, which tend to oscillate with exchange rate volatility and swings in the world market, increased by 8.47 per cent, 4.09 per cent and 10.52 per cent respectively. This is likely to hit ordinary Kenyans more.

That is why CBK, whose primary goal is to stabilise prices, has frantically been trying to mop up excess liquidity and stabilise the exchange rate.

It has been doing this using a number of monetary tools. One of those tools has been selling of eligible Government securities - Treasury Bills and Bonds respectively, a situation that has seen banks park most of their deposits at CBK.

This is aimed at reducing the money available for lending to the private sector.

As of May, the total bank reserve at CBK - minimum fraction of commercial banks’ deposits required to be stashed at the apex bank - reduced by Sh32.6 billion, or 12 per cent,  to Sh231 billion from Sh263.6 billion in April - an indicator that some cash has been sucked from circulation.

With reduced liquidity, the rate at which banks lend to each other overnight (interbank rate) currently at 2.51, is expected to go up, with the value traded of Sh8.92 billion in the week ending August 1 expected to decline further.

This will result in costly loans to Mama Mboga as tight liquidity forces lenders to sell money at a higher price. CBK has also been busy trying to stem the free-fall of the Shilling, by engaging in foreign exchange transactions.

“Most of the currency volatilities are as a result of supply-demand mismatch and because banks are main key players in the payments channels, the open market operations remain an ideal tool to correct the imbalances,” said Ogutu.

Between July 18 and August 1, the official reserve of foreign currencies dipped by $25.7 million (Sh26.5 billion) in what was seen as an attempt by CBK to stem the free-fall of the Shilling by selling dollars cheaply to lenders.

Dr Njoroge insists that they are not targeting a certain exchange rate, and will ideally let it go “wherever it wants to go.”

“The only thing we do is to minimise the volatility. So we will in effect lean against the wind when there is a very strong appreciation to slow the pace of appreciation,” he said.

“And when there is a very strong pressure to depreciate, we will lean against the wind and intervene and minimise the pace of that depreciation. To CBK’s credit, the local unit has stabilised at 103 to the dollar.