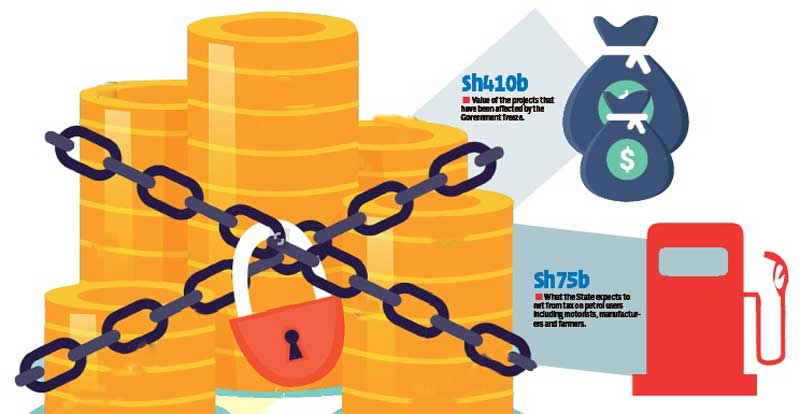 The next three months will be the longest and the tensest for Treasury officials.  The dreaded International Monetary Fund (IMF) is in town.

It is also going to be tough for Government officials who have been swimming in cash like a fish in water.

Tenderpreneurs who have been working in cahoots with Government officials, bagging all State tenders as they come must be quaking in their boots as the austerity frenzy catches on.

Overall, it is the public that will feel the full weight of the ongoing fiscal consolidation as the price of petrol rises to Sh130 a litre in September from the current Sh112, mobile money transactions is going to get expensive, with Treasury increasing excise duty on this prevalent economic activity to 12 per cent from 10 per cent.

The price of Kerosene, critical for cooking by the poor, will also go up. Chocolates, juices, sweets, and many other confectionaries will also be more expensive.

Kenya’s economic woes have begun heating up, with Treasury CS, Henry Rotich walking a tightrope between advocating for more belt-tightening to ensure debt sustainability and stable macro management, while also having to consider the obvious impact it can have on the recovering economy. The public debt currently stands at a whopping Sh4.9 trillion.

IMF has said there is no more space remaining to chalk up more debt. So the country has to squeeze more from taxpayers or deny them some services including the building of new roads, ports, railways, hospitals, schools and many other development projects.

The strongest indication of a trouble times ahead is the delayed joint statement with the IMF that insiders say strongly recommended the need for the government ‘to live within its means’. When asked about when the IMF statement would be published, both National Treasury CS and PS said: “very soon.”

So, it is clear that the jury is still out on whether now is the right time, or not, to aggressively push austerity and boldly make structural adjustments. It is also clear that anti-austerity sentiment is creeping in some sections within government and it has already manifested itself politically.

The civil service might not be that safe, after all. The merger of State corporations, a process that started in 2015, is also being implemented. “Some of those are ongoing,” said Jane Mugambi, secretary to the now-defunct State Corporations Advisory Committee (SCAC). National Treasury has already started implementing its own, merging Youth, Women and Uwezo funds into Biashara Fund.

The IMF had even given the country Sh600 million to support the process, some of which would compensate Government workers who would fall victim to the rationalisation process. The Government was expected to save Sh4 billion from the process.

And if you are a ghost worker in the State’s payroll, your days are numbered.  President Uhuru Kenyatta wants every penny spent accounted for. At least in the next three months.

The mother of all austerities is just beginning to take shape and the country might witness the return of the 1990s-style Structural Adjustment Programs (SAPs). SAPs were insidiously pushed down the throats of most developing countries by the IMF and the World Bank, leaving behind a trail of suffering as thousands of civil servants were laid off.

And now, President Kenyatta has frozen all new projects, sparing only those which are aligned to his Big Four agenda. And even those linked to this plan have to be authorised by National Treasury Cabinet Secretary Henry Rotich and his Principal Secretary Dr Kamau Thugge.

Ministries will only start the procurement of new projects after completing all their ongoing ones, in what is aimed at reducing the number of white elephant projects spread across the country.

Following this directive, Ministries, Departments and Agencies (MDAs) can only access money to pay salaries and administrative costs as they await Treasury’s approval for other domestically-financed projects.

Projects worth Sh410 billion have been affected. Thugge said these projects, which are fully financed by the Exchequer, will be uploaded on IFMIS for tendering only after an agreement between Treasury and line ministries.

They include the laptops’ programme which had been allocated Sh11.9 billion in the current financial year. Also put on hold is the Sh9.4 billion medical equipment leasing project for 98 hospitals as line ministries wait for Treasury to decide which new projects are aligned to the Big Four.

You can blame it on scissor-wielding IMF. A team from the Bretton Woods institution is in town. Known for the infamous structural adjustments programmes (SAPs) of the 1980s and early 1990s, which a number of observers have blamed for destroying most African economies, they have come with the same sombre prescription--cut spending.

From last week to the end of this week, the IMF team will not only review the country’s economic outlook as is the ritual for every country that has a programme with it.

The team is also here to remind Central Bank of Kenya Governor Dr Patrick Njoroge and Cabinet Secretary Rotich of a promise they made to their President, Christine Lagarde, some three months ago: to increase revenues, reduce uptake of debt and abolish interest controls.

The country’s macroeconomic authorities have until September to actualise all these. The clock is ticking.

Economics lecturer at the University of Nairobi Gerishon Ikiara said these new austerity measures are more internally driven, compared to those of the 1990S.

“If the Government is going to achieve the Big Four, and carry on with the routine financing of such things as education and health, it needs to cut out as much waste as possible,” said Ikiara.

Economist David Ndii said that it was difficult to compare the 1990s SAPs which included massive structural reforms like liberalisation, deregulation, and privatisation with the latest round of austerity measures. Moreover, he said, the recent austerity measures have not been implemented.

“But the fiscal situation in terms of the size of the budget deficit and debt distress is worse,” said the controversial economist.

Rotich and Njoroge made a similar promise in 2016 when they requested for the $1.5 billion (Sh150 billion) precautionary credit facility which the country would only draw upon in case of some exogenous shock such a rise in global prices of oil, drought or volatility in the global financial market.

The two policymakers promised to reduce the present value of gross public debt to 45 per cent of Gross Domestic Product (GDP) in the medium-term.

They also promised to increase tax revenues and reduce spending to narrow the fiscal deficit - the difference between total expenditure and revenues generated - to five per cent in the financial year that ended in June 2018.

“We are committed to gradually adjusting fiscal policy, through a combination of lower spending and higher revenues. We target a reduction in the fiscal deficit to 6.5 per cent of GDP in 2016/17 and five per cent in 2017/18, from our unchanged deficit target of eight per cent of GDP in 2015/16,” said the two in a letter of intent to Lagarde.

The Government promised to scrap a number of tax exemptions as one of the measures to increase tax revenues.

They would also tighten eligibility for allowances, especially those at the high end of the job scale, freeze them in nominal terms pending their review, and eventually include them as part of the base pay.

“Furthermore, we plan to adopt a wage and remuneration policy based on a wage grid that ensures comparability of salaries with the private sector,” they noted. All investment projects were also to be evaluated if they were value for money.

The Kenya Revenue Authority (KRA) was also to improve custom revenue collection by growing its reach. Those who undervalued their imports would be heavily punished. All these measures were aimed at bringing fiscal deficit to five per cent in financial year 2017/18 and debt levels to 45 per cent.

Yet, by June 2017 when the IMF came for its round of reviews, the country’s nominal public debt on a net basis had gone up to 51.9 per cent as a fraction of GDP.

“The FY2016/17 fiscal deficit increased to 8.8 per cent of GDP (from 7.3 per cent the previous year), exceeding the programme target by nearly two per cent of GDP,” said the IMF in a statement.

The Government was chalking up debt after debt to finance massive infrastructural projects, a situation that saw the country’s fiscal deficit deteriorate to 9.1 per cent in Financial Year 2016/17, with Treasury now struggling to bring it down to 7.2 per cent of GDP- not five per cent as promised to IMF- in Financial Year 2017/18.

And so in June 2017, the IMF yanked away the $1.5 billion standby loan, leaving the Shilling exposed to exogenous shocks.

Although Kenya has a sufficient buffer in form of  $8.8 billion in Foreign Exchange Reserves that is enough to cover the country’s import for close to six months, the withdrawal of IMF’s credit facility sent a wrong signal to investors.

Not only was the facility a critical insurance cover, the country needed it more at this time considering that it’s an active player in the international debt market.

Standard Chartered Bank Chief Economist for Africa and the Middle East Razia Khan in January said the country could cover itself by signing up for the IMF’s precautionary credit facility. “If we sign up for an IMF programme, we will be signing up for a requirement of fiscal policy and that will provide reassurance to investors. So the risk premium that we have to pay on our debt declines,” she said.

Ms Khan noted that with the facility, the country will have identified itself as a good reformer. “It will be important for the ease of Kenya’s refinancing in order to instil investor confidence and that of rating agencies,” she added.

In March, the Kenyan authorities kowtowed before the IMF President, again.  They requested Lagarde for an extension of the Stand-By Arrangement (SBA) by six months to September to allow them “additional time to complete the outstanding reviews.”

“In order to allow for sufficient time to complete the remaining reviews under the programme and provide a strong policy anchor, we wish to request for an extension of the SBA through September 14, 2018,” said Rotich and Njoroge while requesting for an extension.

Rotich said Uhuru’s freeze directive would inject prudence in the government’s procurement processes that had become a soft spot for theft and graft.

“The President wanted to make sure that there is no jumping into new projects before ascertaining that there are old ones that need financing,” said the CS.

By Boniface Gikandi | 5 days ago