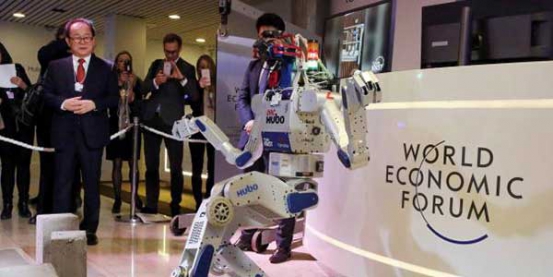 Such things may be science fiction today but they will be scientific fact by 2025 as the world enters an era of advanced robotics, artificial intelligence and gene editing, according to executives surveyed by the World Economic Forum (WEF).

Nearly half of those questioned also expect an artificial intelligence machine to be sitting on a corporate board of directors within the next decade.

Welcome to the next industrial revolution.

The promise is cheaper goods and services, driving a new wave of economic growth. The threat is mass unemployment and a further breakdown of already strained trust between corporations and populations.

"There is an economic surplus that is going to be created as a result of this fourth industrial revolution," Satya Nadella, chief executive of Microsoft (MSFT.O), told the WEF's annual meeting in Davos on Wednesday.

"The question is how evenly will it be spread between countries, between people in different economic strata and also different parts of the economy."

Robots are already on the march, moving from factories into homes, hospitals, shops, restaurants and even war zones, while advances in areas like artificial neural networks are starting to blur the barriers between man and machine.

One of the most in-demand participants in Davos this year is not a central banker, CEO or politician but a prize-winning South Korean robot called HUBO, which is strutting its stuff amid a crowd of smartphone-clicking delegates.

But there are deep worries, as well as awe, at what technology can do.

A new report from UBS (UBSG.VX) released in Davos predicts that extreme levels of automation and connectivity will worsen already deepening inequalities by widening the wealth gap between developed and developing economies.

“The fourth industrial revolution has potentially inverted the competitive advantage that emerging markets have had in the form of low-cost labor,” said Lutfey Siddiqi, global head of emerging markets for FX, rates and credit at UBS.

“It is likely, I would think, that it will exacerbate inequality if policy measures are not taken.”

An analysis of major economies by the Swiss bank concludes that Switzerland is the country best-placed to adapt to the new robot world, while Argentina ranks bottom.

There will be winners and losers among companies, too, as new players move into established industries with disruptive new technologies.

That is something uppermost in the minds of Davos attendees such as General Motors (GM.N) CEO Mary Barra, who is confronting the threat of driverless cars - another science fiction that has become science fact - or bank boss Jamie Dimon at JPMorgan Chase (JPM.N), facing competition from digital "fintech" start-ups.

Such innovations, coupled with the rise of robots in both the manufacturing and service sectors, could automate vast numbers of jobs. Oxford University researchers predicted in 2013, for example, that 47 percent of U.S. jobs were at risk.

Such fears about technology destroying jobs are not new. The economist John Maynard Keynes famously cried wolf in 1931, by issuing a warning of widespread "technological unemployment".

The question is whether this time will be different, given the speed to change and the fact that machines now offer brain as well as brawn, threatening professions previously seen as immune, such as entry-level journalism or routine financial analysis.

Pessimists fear this will hollow out middle-income, middle-class jobs on an unprecedented scale, with the WEF itself predicting that more than 5 million jobs could be lost in 15 major economies by 2020.

But ManpowerGroup (MAN.N) CEO Jonas Prising is more upbeat for the long term. "If history is any indicator, we'll have more jobs being created in the end than are going to be destroyed," he said.

However, beyond the Davos talking-shop there are doubts about how well business leaders will actually plan for the future.

"When you have these very big levels of disruptive change you need some pretty serious thinking and action," said Ian Goldin, professor of globalization and development at Oxford University.

"But the CEO who really looks years ahead and looks at broader social issues is rare, even in Davos."

By Grace Maina 16 hours ago
Shipping & Logistics
How to overcome shipping challenges
.