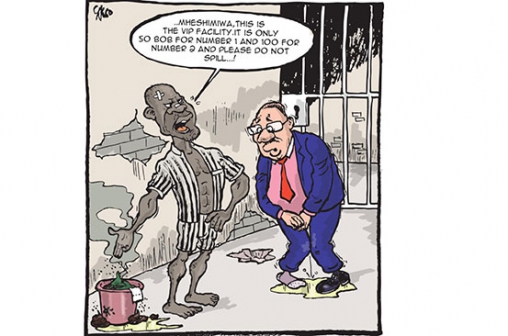 NAIROBI: Heaven knows that my arresting officer is a liar. May his tongue turn into a strip of dry leather when he faces the Kavuludi vetting team to explain how he maintains all the widows he has inherited. Imagine the officer booking me in for being drunk and disorderly. Me, a disorderly drunk! I could hold in my drink long before the cookie received his first bribe.

But that is beside the point. This happened last week and I am a free man once again. Reveling in the joys of nectar in my favourite watering hole. They are throwing a bash for me to celebrate the fact that my friend and I survived the ordeal. We did not have to give a Sh200 million bribe to be acquitted.

All the boys at the roughhouse wish they were guests of the state as well. Simply because our colleagues in Pangani cells were honourable hatemongers. “The Pangani Six are a bunch of sissies if you ask me,” El Chapo was telling the house “What man feels ashamed to pee in front of the other boys unless he is a closeted gay?” he posed. He was referring to a Mheshimiwa who had a tough time aiming at the bucket like the rest of the boys.

He recounted how another MP was crying out for his mother the whole time despite pleas by his colleagues to shut up.

Kin claim man who died in police cell had injuries

All the while, I was quiet. Not being the accomplished storyteller like my friend El Chapo, but I was itching to bamboozle my mates at our favourite chang’aa den with tales of the time I had the privilege to be detained in police cells with waheshimiwa.

We might be the only guys who have had the opportunity to examine this particular species up close and personal. Raise your hand if you have ever seen an MP without his phone, money and cars. Oops sorry, I forgot about the handcuffs. Anyway, what I mean is that I spent quality time with these fellows in their primordial Kenyanness. The six shared a single mulika mwizi.

One of the MPs must have been a thug in his past life. The tactic he used to sneak in the mulika mwizi was impressive as he passed it right under the nose of the afande.

All the while, the rest of us were standing aside against the walls in the cell as we watched with awe as CORD and Jubilee honourables shared the gadget, like it was the nusu mkate government.

All of them spoke to baba who assured them he could work out a probation deal for them if they conducted themselves with decorum. Of course he did not know they had already contravened contraband rules.
The food came and honourable members were startled at the size of vegetables.

“We have to impeach the Interior and National Coordination Cabinet Secretary, they vowed. If we both marshal members to vote, we have enough numerical strength to send Nkaissery back home to herd cows. Yaani he couldn’t employ someone to chop these vegetables with all the money we allocate him!?” they wondered.

The meal caused one of them to have a running stomach and the poor man was quite a sight. Croaching in his fancy suit clutching at his stomach the ordeal seemingly stripped him of the honourable title for a while.

A commission was to be formed to investigate the poison they use in the name of seasoning in the police cells kitchen. I can foretell who the chairman will be. They wondered how mwananchi survives all this. Being civilians in the cell, they conducted some investigations.

“Waheshimiwa, at least in jail, you are assured of a meal,” El Chapo told them. I was asked say my wish, and if I said ‘tender’ without blinking. They saved my number in the kabambe. I am still waiting for my life changing call.

Johnstone Muthama speaks on the suspension of NASA leaders' passports

Nathan Redmond to replace Sadio Mane at The Saints

Southampton are set to seal the £11million signing of Norwich winger Nathan Redmond, who is set to have a medical on the South Coast on Saturday

By Stevens Muendo | 14 days ago