United Democratic Alliance (UDA) has made public the list of officials who will drive Deputy President William Ruto’s presidential campaign.

The officials will also run the affairs of UDA.

The position of deputy national treasurer in charge of Programmes went to Kanake Mugo who replaced Lily Nyawira.

The position of deputy national organising secretary in charge of Strategy went to Charles Wanjala while Halima Omar will be in charge of Programmes.

Edward Muriu takes over from Melisa Ngania as UDA Secretary for Legal Affairs.

“I can confirm that we held our inaugural NEC meeting yesterday under the leadership of the deputy president. This now opens the door for the setting up of the elections board,” said the source. 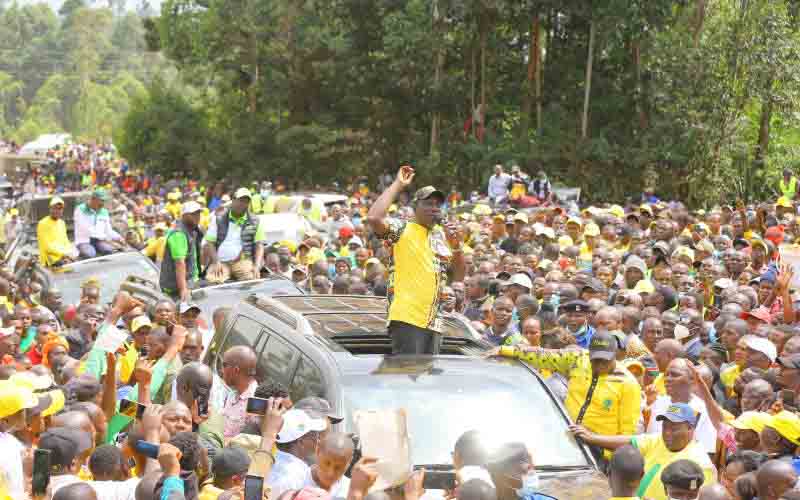 Premium DP Ruto’s UDA begins make-or-break exercise
UDA has announced dates for its primaries, setting in motion a do-or-die exercise that has the potential of locking out heavyweights from the election
Politics
By Moses Nyamori
5 months ago
.

Premium Meru's fortunes up with bypass and stadium but fails to get dams
Central
By Phares Mutembei
50 mins ago
It's smooth sailing for Mombasa Port despite post-election jitters
Coast
By Philip Mwakio
1 hr ago
Youths do not live in a vacuum; they need support from all of us
Opinion
By Evelyn Samba
1 hr ago
Parallel vote tallying good for transparency, a plus for our democracy
Opinion
By Demas Kiprono
1 hr ago
.

By Fred Kagonye 4 hrs ago
Raila, Ruto votes in the 6 constituencies announced by Chebukati