Nairobi
President Uhuru Kenyatta on Covid-19 and the purge on rebellious bigshots in Jubilee Party. 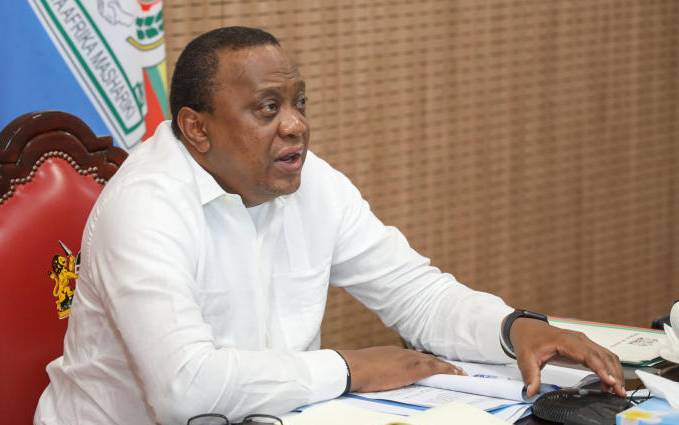 President Uhuru Kenyatta (pictured) has told of how he admonished one of his sons for breaching the Covid-19 curfew. In an interview with a local TV station, the President narrated how the son sneaked out while in a Mombasa trip recently with the other Kenyattas. He said that he lost his cool when the son tried to defend himself despite putting the lives of other family members at risk.

“Okay, you’ve gone out. You have had fun. Your grandmother is 80-plus. What if something happens to your grandmother? How are you going live with that? Because you want to see your girlfriend?” said the president. He revealed that his family, comprising his son, wife and mother got contained in Mombasa after the government announced a movement restriction from Mombasa to Nairobi and vice versa.  He said that the war against the Covid-19 pandemic required joint efforts and personal responsibility to win. “This shall be a factor of personal responsibility. We have seen a surge in this disease and Germany is a good example.” This comes after the country registered the highest number of Covid-19 infections over the past 24 hours. On Wednesday, 123 people tested positive countrywide as Nairobi remains the hotspot for the virus after recording 85 cases of the 24-hour tally. Kenya now has 1,471 cases after testing 65,000 people.

On the ongoing purge on rebel Jubilee legislators the president said the party leadership would continue with its mission to weed out rebels. He said he would not spare anyone who was against the agenda that he laid out as a promise to Kenyans. “If you feel uncomfortable, this gives you the time to go and do whatever you want to engage with,” said the president. In remarks apparently aimed at his deputy William Ruto, who leads a splinter group of the ruling party and whom the president has criticised for engaging in premature camping’s ahead of the 2022 pols, the president said: “Don’t allow your ambitions for tomorrow cloud what you must do today because what you do today determines what you shall be tomorrow”. To the Jubilee rebels, he said: “If you feel you are not going to work in tandem with my agenda then why don’t you, please, let me put someone who will help me achieve that agenda I promised Kenyans for the second time in 2017 and for the first time in 2013?”

The president said he could not keep on pleading with his detractors. This comes after the removal of senators allied to the DP from plum Senate positions after failing to attend a party senatorial group meeting that was chaired by the president on May 11. By Wednesday, Tharaka-Nithii Senator Prof Kithure Kindiki and his Nandi counterpart Samson Cherargei declined nominations to the Senate committees that the party had offered. The duo joined Elgeyo Marakwet Senator Kipchumba Murkomen who yesterday declined a nomination to the Devolution Committee. The lawmakers are protesting after being ejected from the positions they held in the House earlier. The President has affirmed his commitment to the Building Bridges Initiative terming it as ‘one of the most transparent processes ever seen in this country.’ Uhuru said that his mission with ODM leader is to bring reforms that will help the country. “I have not reached out to break what we have but to extend what we have,” he said. The Senate voted out Prof Kindiki as the Deputy Speaker post on Friday as was Kipchumba Murkomen (Elgeyo Marakwet) as Majority leader who was replaced by Samuel Poghisio (West Pokot, Kanu). Voted out was Nakuru Senator Susan Kihika as Chief Whip with the job going to Murang’a Senator Irungu Kang’ata.