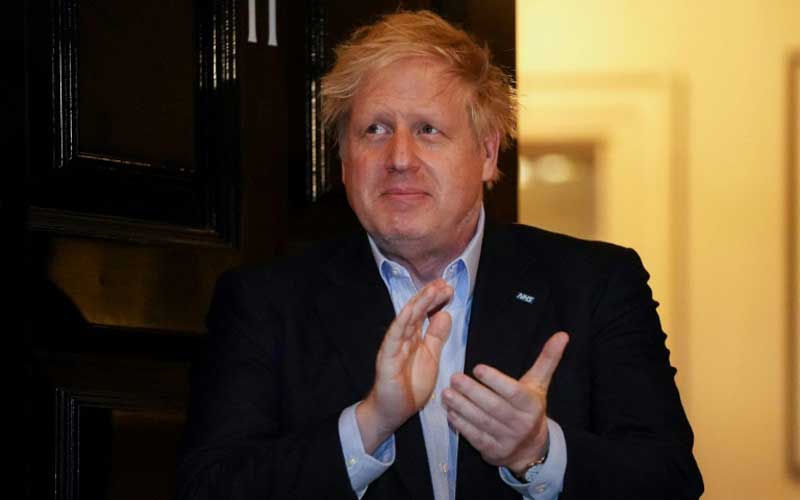 British Prime Minister Boris Johnson (pictured) was taken to hospital after failing to shake off coronavirus symptoms, as Queen Elizabeth II said a united effort would defeat the outbreak. The government announced within an hour of the monarch's rare special address Sunday to the country and Commonwealth nations that Johnson had been admitted for further tests as a precaution. Johnson, 55, had been due to re-emerge from seven days of self-isolation on Friday, a week after announcing he had tested positive for COVID-19 and had mild symptoms.

But he said in a video message on Friday that he would continue to stay at home because of a persistent high temperature. Downing Street called it a "precautionary step" and it is understood his admission was not an emergency and he was taken to hospital on medical advice. Foreign Secretary Dominic Raab is designated to take over if the prime minister is unable to perform his duties but government sources said Johnson was still in charge. Johnson is the most high-profile world leader to contract the virus. His pregnant partner, Carrie Symonds, is also recovering from symptoms but has not been tested. Health Secretary Matt Hancock returned to work on Friday after a week at home following his positive test for COVID-19. The chief medical officer, Chris Whitty, has also displayed symptoms.

Hancock on Sunday described Johnson's condition as "OK" and said he had been in "good spirits". "He's very much got his hand on the tiller," he told Sky News television but said Johnson was being careful to follow government advice on self-isolation. Medical experts said doctors would likely be assessing Johnson's lung and heart function. "Doctors will be monitoring important vital signs such as oxygen saturations," said Rupert Beale, a group leader at the cell biology of infection laboratory at the Francis Crick Institute. "They will also check blood tests to see what the immune response to the virus looks like, and to assess liver and kidney function."

US President Donald Trump said he was "hopeful and sure" Johnson would recover, calling the prime minister "a friend of mine" and a "great leader". 'We'll meet again' The Downing Street announcement came as the 93-year-old queen offered a message of hope to everyone affected by the global pandemic, which has seen more than 1.2 million cases and more than 68,000 deaths. Britain currently has 47,806 confirmed hospital cases and 4,934 deaths. The monarch's eldest son, heir to the throne Prince Charles, has tested positive after displaying mild symptoms. In only her fourth address at a time of crisis in her 68-year reign, the queen said the outbreak could be defeated by a collective effort in a "common endeavour". "We will succeed -- and that success will belong to every one of us," she said in a speech recorded at Windsor Castle, west of London, where she moved as a precaution on March 19. Thanking healthcare staff and keyworkers, and praising the community response to the outbreak, the queen said people in Britain and around the world could feel proud. "Together we are tackling this disease, and I want to reassure you that if we remain united and resolute, then we will overcome it," she added. She drew on her experience of World War II, when she and her sister princess Margaret were evacuated to Windsor as London was bombed, drawing parallels with people forced apart by the virus. In particular, she referenced British wartime singer Vera Lynn, whose song "We'll Meet Again" became an anthem for service personnel fighting abroad, far from their loved ones. "We should take comfort that while we may have more still to endure, better days will return: we will be with our friends again; we will be with our families again; we will meet again." Tougher measures Johnson was criticised for his initial light-touch approach to the outbreak but on March 23 ordered a three-week lockdown after scientists warned the stance risked huge numbers of deaths. People have been told only to leave their homes to shop for essential items and medicine, and to exercise. But Hancock on Sunday warned that outside exercise could be banned after concern warmer weather could tempt people from their homes to public parks and open spaces. A major south London park was closed on Sunday after high numbers of sunbathers on Saturday. Hancock later said changes to social distancing were "not imminent" but in a sign of the seriousness of the measures, Scotland's chief medical officer resigned for breaking the rules after twice visiting her second home despite fronting an ad campaign calling for Scots to stay at home. She apologised and Scotland's First Minister Nicola Sturgeon backed her to stay on. But on Sunday night Calderwood said she had quit as her behaviour risked "becoming a distraction".